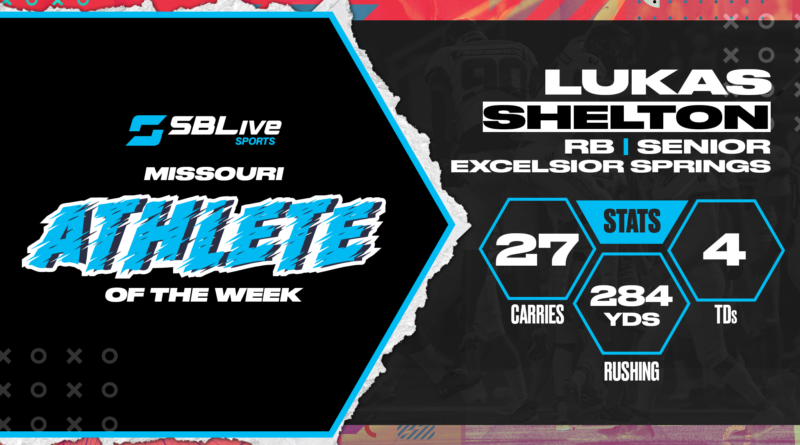 Congratulations to Excelsior Springs running back Lukas Shelton for being voted SBLive’s Missouri High School Athlete of the Week for Sep. 20-25!

The Tigers’ senior running back carried the ball 27 times for 284 yards rushing (10.5 yards/carry) and four touchdowns during Excelsior’s 35-26 win against Harrisonville in Week 5.

Here are the other athletes who were nominated for Sep. 20-25:

Lindon, a freshman, had a first-place time of 23 minutes, 8 seconds and 40 milliseconds in the 5,000-meter run at the Northside Invitational Sept. 22 in St. Louis, Missouri.

During the Wildcats’ 35-26 loss to Excelsior Springs, in Week 5, the senior running back turned 12 carries into 230 yards (19.1 yards/carry) and two touchdowns.

Smith, a senior who plays center field, was 3-for-4 with an RBI during the Jaguars’ 6-2 win against Lee’s Summit West Sept. 23.

Limback, a senior outside hitter, recorded 18 kills during Santa Fe’s 2-0 win against Cole Camp Sept. 25. Limback is hitting a total percentage of .484 so far this season.

Torres, a junior, did it all for the Hornets in their 10-8 win against Staley. The linebacker had a game-high 7.5 tackles to go along with a sack, a tackle for loss and an interception.

Despite a 3-1 loss to Woodland, the senior libero had a season-high 42 digs (10.5 per set). McBride avoided a single serving error on 13 attempts.

Bell accounted for every touchdown the Trojans scored en route to their 30-22 win against Lee’s Summit in Week 5. The junior quarterback was 25-of-37 (75%) for 410 yards passing and three touchdowns. On the ground, Bell had 14 yards and a touchdown.

Lichtenberg, a senior, assisted on the Pioneers’ only two goals of the game in a 2-1 comeback win against Lindbergh Sept. 23.

Sanders, a senior, had four catches and turned those into a season-high 132 yards receiving and a touchdown during Odessa’s 27-24 win against Pleasant Hill last week.

As a senior, Genel finished the 5,000-meter run in 18 minutes, 50 seconds and 31 milliseconds. The time was good enough for first place at the East Newton XC Invitational Sept. 25 in Granby, Missouri.

During the Wildcats’ 37-13 win against Adrian, there seemingly wasn’t a thing Slavens couldn’t do. The senior quarterback was 6-for-12 for 129 yards and two touchdowns to go along with 12 carries for 207 yards rushing and two scores. He had six tackles while playing safety, too.

During Lesterville’s 3-2 win against Bunker Sept. 20, the senior outside hitter recorded 35 kills and 20 serving aces.

Wetlaufer, a junior, set a new school record when he threw for 359 yards during a 63-56 win against Lafayette (St. Joseph) in Week 5. He added three passing touchdowns and one rushing touchdown to help orchestrate a 21-point comeback for the Indians’ first win of the year.

As a sophomore, Reinhart was the only underclassmen to place in the top four. He finished with a second-place time of 17 minutes, 18 seconds and 29 milliseconds at the Hermitage Invite Sept. 25 in Hermitage, Missouri.

The senior running back tallied four touchdowns and 147 yards rushing on 14 carries during Webb City’s 41-6 win against Carl Junction in Week 5.

During Joplin’s 56-7 win against Willard last week, the senior quarterback was 13-for-16 for 175 yards passing and two touchdowns. On the ground, Wright added 94 yards rushing and three scores on just four carries.

Ollison, a senior, was 3-for-3 with four runs scored during Versailles’ 15-5 win against Marshall Sept. 25. She had a double and a triple en route to the 10-run win.

Baisch, a senior linebacker, had a game-high 11 tackles and two sacks en route to the Rams recorded a 35-0 win against John Burroughs in Week 5.

The senior averaged 6.7 kills per set for a total of 20 during Eagle Ridge’s 3-0 sweep of Heritage Classical Christian Academy Sept. 24. She had four digs throughout the match, too.

Diaz, a junior, finished the 5,000-meter run with a time of 17 minutes, 10 seconds and 80 milliseconds, good enough for first place at the Belle Invitational Sept. 23 in Belle, Missouri.