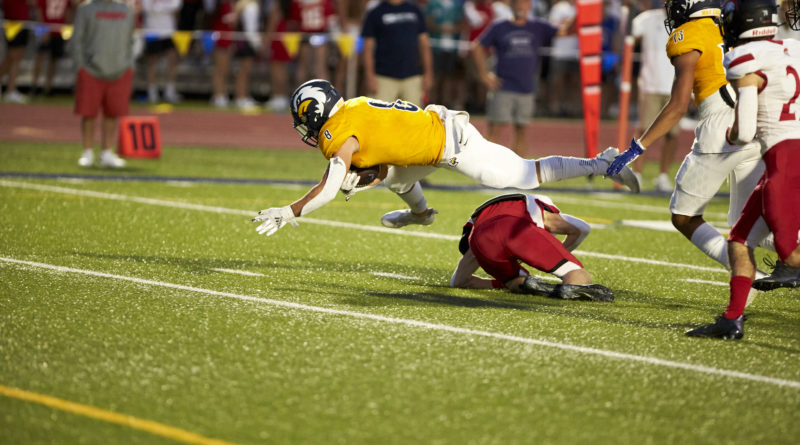 Top-ranked CBC handed St. Thomas Aquinas (No. 1 in the Kansas Class 5A state rankings earlier this season) a third consecutive loss. Ralph Dixon rushed for two touchdowns, including a 74-yarder that opened the scoring, for a Cadets team that has scored 40-plus points in every game this season.

Jackson planned to have a bye week but that changed when Cardinal Ritter came calling after the Lions’ originally scheduled Week 6 opponent cancelled on them. The Indians had no problems with the late addition to the slate as they led 21-0 at halftime behind three touchdowns from Isaiah Davis.

Behind a 28-point second quarter, the Eagles cruised to a Homecoming victory against a hot Park Hill team. Sam Van Dyne passed for two touchdowns, and Cayden Arzola rushed for two scores. The Liberty North defense has surrendered 10 points in the last eight quarters.

The Broncos’ undefeated run continued with a shutout against Blue Springs. Tre Baker passed for 257 yards and three touchdowns. Isaiah Mozee caught four passes for 113 yards and two touchdowns, while Devin Blayney hauled in three receptions for 102 yards and a score.

The Vikings led 25-14 at halftime and 32-20 in the third quarter, but not even that was enough to hold off the Indians. Francis Howell had too many missed opportunities in the game, settling for three field goals in the first half and missing one in the second half.

As expected, the Spartans jumped all over winless Roosevelt. De Smet has posted back-to-back shutouts while outscoring its opponents by an eye-popping total of 114-0 and now carries major momentum into the final three-week stretch of the regular season.

Down 32-20 in the third quarter, the Indians scored the final 22 points of the game to earn their first victory in the series since 2008, which snapped a nine-game, head-to-head losing streak against Francis Howell. Kyle Wuebbling rushed for 190 yards and two scores.

Shockingly, the Warriors’ defense surrendered double-digit points for the third-consecutive game. However, they had no trouble coming away with a lopsided Homecoming victory to stay undefeated on the season.

An early 14-7 deficit didn’t last long as the Eagles scored the game’s final 38 points in what turned into another rout, their fourth-consecutive win by at least 30. Always Wright accounted for another four touchdowns.

What trap game? Behind Luke Gall’s three first-half touchdown runs, the Tigers scored the game’s first 42 points, proving they were not looking ahead to next week’s Southern Missouri showdown with Joplin.

The Rams had lost five in a row and seven of the last eight to Lutheran North, but they finally turned the tide. Steven Hall scored four touchdowns on the ground, while Reagan Andrew threw two touchdown passes in the game, giving him 50 for his career.

After grabbing a 14-8 lead early in the second quarter, the Zizzers get outscored 28-0 in the middle of the game and fall down 36-14 (the first time they’ve trailed all season) in a battle of undefeated Ozark Conference teams.

With the contest tied at 21 at halftime, Nixa was able to post a shutout in the second half and claim the Backyard Brawl Trophy for the third consecutive year. Jaden Aven’s halfback pass to Kael Combs broke the game open.

Behind a four-touchdown game from running back Aneyas Williams and the defense’s first shutout of the season, the Pirates put together one of their best all-around performances of the year in a Homecoming victory.

For the fourth time this season, the Lamar defense holds an opponent to single-digit points. The Homecoming game this week got out of hand early against a winless Mt. Vernon team.

Without question, the Dragons continue to hold the title of top small-class team in the St. Louis area with a fourth convincing victory against a Missouri team – they’re only loss to state-ranked Neuqua Valley (Ill.).

It might not have been in impressive fashion, but the Panthers did enough to hold off a struggling Staley team in a Breast Cancer Awareness Game. The Park Hill South defense has given up only 14 points in the past two weeks.

It’s been all about the Hawks’ offense this year, but this week the defense took center stage by recording its second shutout, its first since the opener, against one of its bitter rivals.

After squeaking out a pair of close victories (by a combined nine points) the past two weeks, the Bulldogs put a whipping on Warrensburg. This marks the Bulldogs’ third shutout of the season.

Nick Carr rushed 27 times for a season-high 194 yards and two touchdowns and also caught a 50-yard touchdown pass from Zander Dombrowski to lead the Panthers to a conference victory.

Quarterback Dylan Hair turned in one of the most incredible individual performances in the state this season, accounting for 599 yards of total offense and nine total touchdowns – six on the ground and three through the air.

After standing at 2-2 after four games, the Cardinals have rattled off back-to-back wins after a Homecoming shutout. Webb City’s defense has surrendered six points in the past two games heading into next week’s clash with Nixa.

For the third time in six games this season, the Valle Catholic defense turned in a shutout, this latest one on Homecoming. On the other side of the ball, the Warriors have scored at least six touchdowns in every contest so far.

A four-game win streak came to a crashing halt as the Trojans mustered all of 116 yards of total offense, which included a mere 22 rushing yards on 16 carries, and eight first downs against the high flying Eagles.

The Yellowjackets recorded arguably the biggest regular-season victory in program history. Led by Cade Muscia’s four touchdown runs, Lebanon actually led 44-20 in the fourth quarter before the Zizzers tacked on two late touchdowns to make the final score look closer than the game was.