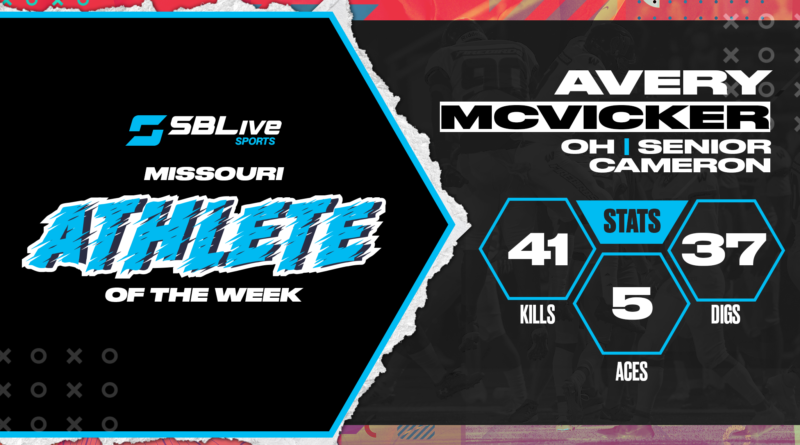 Congratulations to Cameron volleyball star Avery McVicker for being voted SBLive’s Missouri High School Athlete of the Week for Sep. 13-19!

Throughout 10 total sets last week at the Lathrop Tournament, the senior outside hitter had 41 kills while adding five serving aces and 37 digs to lead the Dragons to a 5-0 outing.

Bell, a junior, did it all for the Trojans in their 50-0 win against Blue Springs in Week 4. He was 22-of-29 for 191 yards passing and four touchdowns, and he also had 13 carries for 42 yards rushing and two touchdowns.

Jackson, a senior, finished the 5,000-meter run with a first-place time of 20 minutes and 28 seconds at the Paul Enke Invitational Sept. 18 in St. Louis.

Despite a 26-21 loss to Harrisonville in Week 4, Walker compiled a game-high 16 total tackles for Warrensburg’s defense.

Barta, a junior, had a first-place finish in the 5,000-meter run with a time of 18 minutes, 29 seconds and 99 milliseconds at the Clinton XC Invite Sept. 18 in Clinton, Missouri.

During Kearney’s 35-0 win against Ruskin in Week 4, Smith took 23 carries and turned those into 282 yards rushing and four touchdowns. The senior running back had two catches for 19 yards and a touchdown, too.

Gilliland, a sophomore, netted two goals to power Althoff to a 2-0 win against St. Mary’s in the Alton Marquette Shootout Sept. 18.

Williams, a senior defensive end, tallied 18 tackles during the Panthers’ 88-42 win against William Chrisman. He had four sacks and eight tackles for loss against the Bears.

The senior wideout reeled in seven catches for 61 yards and three touchdowns during the Broncos’ 41-14 win against Ray-Pec.

During the Blue Jays’ 39-0 win against Lawson last week, Sullivan had 147 yards rushing and three touchdowns on 22 carries.

Durham, a senior outside hitter,  was able to record 19 kills during Willard’s 3-1 win against Glendale Sept. 13. She got a kill on 46.3% of her total attempts.

In a 56-49 win against Savannah last week, Saunders was 25-of-38 for 345 yards and five touchdowns. The senior quarterback had 37 yards rushing and a touchdown on eight carries, too.

The senior outside hitter did a little bit of everything for Winfield despite a 3-1 loss to Orchard Farm Sept. 16. Nicholl recorded five kills, a serving ace, 18 blocks, five digs and an assist.

Rallo, a senior, inked a new personal best — 66, which was four under par — to win the Angel Classic girls golf tournament by five strokes at The Quarry at Crystal Springs Golf Club Sept. 16.

At the Running Raider Invite Sept. 14, Buschling finished the three-mile run in 19 minutes, 54 seconds and 80 milliseconds. The senior finished in third place, just two places behind one of the best girls runners in Illinois — Anna Schuering.

Rubel, a senior linebacker, did a little bit of everything during the Lancers’ 24-20 win against Jefferson last week. He tallied 11 tackles on defense to go along with 53 yards rushing and two touchdowns on 20 carries on offense. He had one reception for 18 yards, too.

Throughout eight sets at the New Haven Round Robin Sept. 18, Sumpter tallied 47 total digs. The senior libero received 39 serves, too, while leading New Haven to a 2-1-1 record.

Despite a 55-26 loss to Oakville last week, Gines was able to compile 153 yards rushing and a touchdown on six carries, along with 95 yards receiving and two touchdowns on three catches.

Gall, a junior running back, accounted for four touchdowns — including three in the first quarter — during Carthage’s 42-14 win against Webb City in Week 4.

Despite a 3-1 loss to St. Joseph Christian, the sophomore middle hitter hit 50% for 15 kills at the Nodaway Holt Invitational Sept. 18 in Graham, Missouri.

Ackley, a senior, finished the 5,000-meter run in 15 minutes, 10 seconds and 67 milliseconds to take first place at the Missouri Southern HS Stampede Sept. 18. He finished 12 seconds ahead of second place.