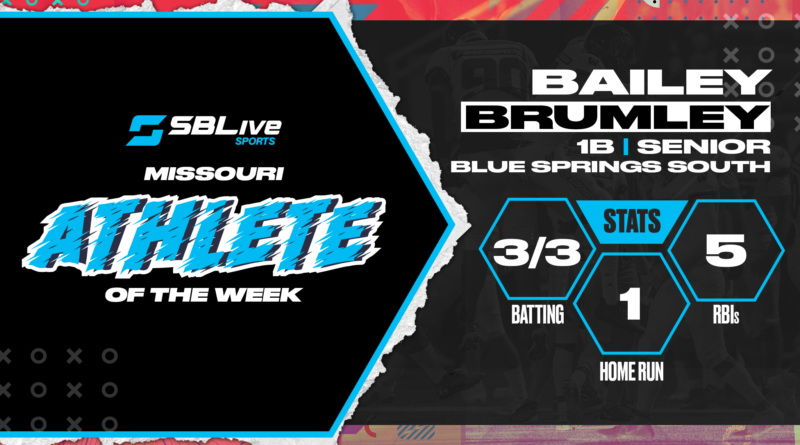 Brumley, a senior who plays first base, was 3-for-3 with a home run and five RBIs during the Jaguars’ 17-0 win against Lee’s Summit West. She has six home runs so far this season.

Shelton, a senior running back, carried the ball 16 times for 215 yards and two touchdowns during the Tigers’ 34-14 win against Moberly in Week 2. He plays linebacker, too, and recorded three tackles, including a tackle for loss.

In a 41-14 win against Lee’s Summit West in Week 3, the junior wideout reeled in nine catches for 175 yards and three touchdowns. Manning had two carries for 9 yards, too.

The senior outside hitter recorded 20 kills during the Knights’ three-set win against St. Dominic Sept. 11 at the Borgia Invitational. Brinkmann averages 5.4 kills per set to this point in the season.

Despite a 14-point loss to St. Thomas Aquinas, Brown was 15-of-23 for 402 yards passing and three touchdowns. The senior quarterback also had 14 carries for 103 yards rushing and a touchdown.

Douglass, a senior, had seven goals and an assist during an 8-4 win against Rolla HomeSchool. He has 18 goals throughout four games to this point in the season.

The sophomore wideout had 276 yards rushing and five touchdowns on 16 carries during the Hornets’ 62-40 win against Oak Grove in Week 3. Love had three catches for 97 yards receiving and a touchdown, too.

Despite a 2-0 loss to Faith Christian Academy, the senior middle hitter recorded a season-high 23 blocks. She received 16 serves during the match, too.

Martin, a sophomore linebacker, had 11 ½ tackles during the Panthers’ 38-28 win against Grain Valley in Week 3. Six of those were good for a tackle for loss.

Despite a 35-26 loss to West Platte in Week 3, the Panthers senior linebacker recorded 19 total tackles, including 16 solo. Bash had a single catch for 5 yards, too.

The senior wideout had 13 receptions for 185 yards and a touchdown during the Griffins’ 35-33 win in Week 3 against Van Horn.

Hill Jr., a freshman running back, carried the ball 17 times for 141 yards rushing and three touchdowns during Vashon’s 35-6 win against Soldan in Week 3. He had a 60-yard punt return for a touchdown, too.

Wilde, a sophomore, set a new school record when he finished in 15 minutes and 15 seconds, good enough for third place at the Olathe North Twilight Classic Sept. 11.

Siebert, a junior setter, tallied 36 assists and 10 digs in the Blue Jays’ three-set sweep of Valle Catholic. Siebert is averaging 9.2 assists per set this season.

The senior cornerback recorded a game-high 14 tackles during Mater Dei’s 31-13 win against Althoff Catholic in Week 3.

The sophomore outside hitter had 18 digs and nine kills during the Chiefs’ 3-1 loss to Nixa last week. Faria is averaging 3.2 digs and 3.1 blocks per set, respectively.

Throughout two games on Sept. 11, both of which were wins, the junior goalie had four saves on four shots, holding the Cardinals’ opponent scoreless in both matchups.

In a 7-3 win against Maysville Sept. 9, the sophomore struck out 11 batters throughout seven innings while only allowing four hits.

In a 49-14 win against Westminster during Week 3, the junior running back found the end zone in three different ways. Moore had a rushing touchdown, a 47-yard receiving touchdown and a 50-yard punt return for a touchdown.

Freiner, a senior, finished with a first-place time of 15 minutes, 48 seconds and 2 milliseconds at the 16th Annual Forest Park XC Festival. Freiner was 10 seconds ahead of second place.

The sophomore forward scored two goals in 12 minutes and 56 seconds en route to the Knights handing North Point its first loss of the season with a 2-1 win Sept. 8.

The freshman tallied nine kills in her varsity debut to help Incarnate take down Lutheran St. Charles in a three-set sweep.

In a 52-47 win against St. Clair during Week 3, the senior running back totaled 375 yards rushing and six touchdowns on 29 carries. He averaged 12.2 yards per carry.