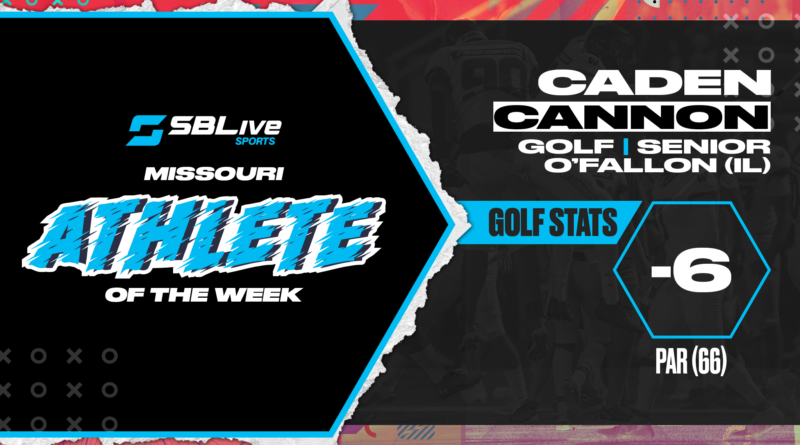 The senior finished 6-under a par 66 during the first round of the Southwestern Conference Boys Golf Tournament at Belk Park Golf Course Aug. 31. Cannon’s 6-under finish tied the school’s record, which was previously set in 2019.

Cannon received 48.41% of the vote, beating out Lafayette (St. Joseph)’s Jaron Saunders who finished second with 34.37%. St. Pius X’s Jack Mosh finished third with 14.85% and Platte County’s Garrett Smith finished fourth with 1.38%. There were over 15,000 votes tallied this week!

Lind, a senior, finished the two-mile run in nine minutes and 45 seconds, good enough for a first-place finish at the Fleet Feet Classic Aug. 31 in Arnold, Missouri.

In addition to being 4-of-5 for 45 yards passing, the junior quarterback tallied 149 yards rushing and 3 touchdowns on 12 carries during the Eagles’ 35-14 win against Oak Park in Week 2.

The freshman pitcher tossed a complete game, which included six strikeouts, in her first career start en route to the Cardinals picking up a 5-4 win against Nevada Aug. 30.

The Pirates junior defensive back recorded two interceptions during a 35-3 win against Kearney at home in Week 2.

The senior outside hitter tallied 18 kills on 30 attempts (60%) during the Spartans’ three-set sweep of St. Mary’s-Colgan Sept. 2. Dudulski finished the match with a .433 hitting percentage.

Arzola, Liberty North’s senior running back, turned 16 carries for 167 yards and two touchdowns during the Eagles’ 44-13 win in Week 2 against crosstown rival Liberty. Arzola also averaged 10.4 yards per carry and had one reception for 32 yards.

The junior defensive lineman terrorized St. Joe Central’s offense in Week 2, recording six tackles and four sacks. His performance propelled the Hornets to a 38-0 win against the Indians on the road.

Despite a 12-0 loss to Sullivan, the Tigers senior quarterback was 12-of-13 for 262 yards passing and three touchdowns in Week 2.

The Fighting Irish senior quarterback threw for 698 yards in Lafayette’s 50-21 win against Atchison in Week 2. Saunders’ broke the MSHSAA record for passing yards in a game, which was previously 665.

Ray, a junior, finished the 5,000-meter run with a state-best time of 17 minutes, 52 seconds and 80 milliseconds at the Rick Weinheimer Cross Country Classic Sept. 4 in Columbus, Indiana.

Depont, a senior running back, used his legs to compile a statline that included 190 yards and four touchdowns on 22 carries during the Flyers’ 26-6 win against Lafayette (Wildwood) in Week 2. It marked Dupont’s second four-touchdown game in as many weeks.

Versailles’ season started Aug. 28, and at the time of publication, Ollison was 11-of-16 with five RBI, four doubles, a triple and a home run. The senior accomplished all of that within the program’s first five games, leading the Tigers to a 4-1 record.

The senior outside hitter tallied 18 kills on 30 attempts (60%) during the Spartans’ three-set sweep of St. Mary’s-Colgan Sept. 2. Dudulski finished the match with a .433 hitting percentage.

Cassville’s program started the season Aug. 28 and, at the time of publication, has played 16 sets of volleyball. In that time, Parnell — a defensive specialist — has recorded 98 digs, good enough for 6.1 per set. The senior has received 100 serves, too.

Lucas, a senior forward, scored five goals on seven shots (71%) during an 8-0 win against St. Louis Christian. It marked the first win of the season for the program.

Despite a loss, the senior goalkeeper recorded 21 saves on 24 shots during Blue Ridge’s 3-1 loss to Glendale Sept. 1. Venable is averaging roughly 10 saves per game this season.

The sophomore finished first in the 5,000-meter run at the 2021 Mexico Fall Invitational with a time of 17 minutes, 33 seconds and 39 milliseconds Sept. 4 in Mexico, Missouri. He finished 22 seconds earlier than second place.

Wilmer, a freshman, finished the 3,500-meter run with a time of 12 minutes, 55 seconds and 4 milliseconds Aug. 31 at the Salisbury 3500 in Salisbury, Missouri. Her time was good enough for a first-place finish.

The junior quarterback carried the ball 21 times for 350 yards and four touchdowns during Seckman’s 49-15 win against Oakville in Week 2. Through the air, Ruble was 5-of-6 for 67 yards passing and a touchdown.

Despite a loss, the sophomore middle hitter tallied 33 digs, 16 kills and six blocks in a five-set match against Greenfield Aug. 30. She received a match-high 31 serves, too.

The Warriors senior quarterback was 8-of-13 for 147 yards passing and three touchdowns during St. Pius’ 56-10 win Sept. 3 against St. Michael the Archangel Catholic. Mosh had six carries for 20 yards rushing, too.