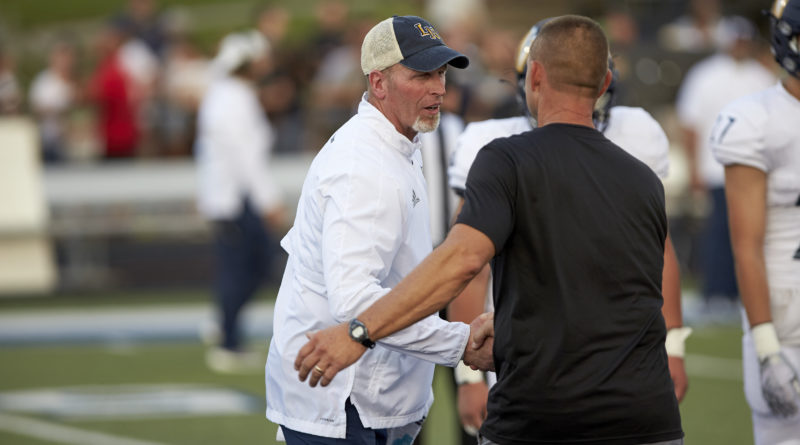 By Chris Geinosky and Jon Walker I Photo by Marty Williams

Most people associated with the Liberty North football program held the same opinion heading into the 2021 campaign: The Eagles have a tremendous amount of raw talent, but with a large core of underclassmen in key roles, would they be ready to challenge the state’s elite this year?

Two weeks into the season, it appears the answer is a resounding “Yes.” Playing a pair of top-five ranked teams in their respective states, Liberty North opened the year with a respectable 43-30 road loss at Arkansas power Bentonville, and then the Eagles rebounded with a statement-making 44-13 victory against crosstown rival Liberty.

“The Bentonville trip was what it was,” Liberty North head coach Greg Jones told SBLive. “We took an inexperienced football team down there and it showed. It’s not like we played bad. We played OK. Heck, we had 380 yards of offense and scored 30 points. We just didn’t play very well on defense, and a lot of that was because we had a lot of guys making their first start.”

What a difference a week made. Jones’ crew looked like a new bunch as the Eagles bottled up Liberty, a team that racked up 450 yards of total offense – and 300  rushing – in an opening-week overtime win.

Now ranked No. 8 in the Missouri Top 25, the Eagles face yet another big challenge to start the season as they will travel to nemesis No. 3 Raymore-Peculiar. Liberty North has lost to reigning Class 6 state champion Ray-Pec three consecutive times, which includes twice in the state semifinals in each of the past two seasons.

“Last year we had great senior leadership,” Jones explained. “This year, it’s slowly but surely coming around. These kids never had to lead before, so they’re learning what leadership looks like and feels like. They’re getting there, but we’ve got to continue to work at it. If we can get there, we have a chance to be dangerous.”

How fast can the young Eagles grow up? We will find out Friday night in the Kansas City area’s premier matchup.

“I think we’re starting to show people what we can do,” North senior leader Justice Braden said. “We just have to stay humble and keep working hard.”

De Smet, Christian Bros. to square off in top-four showdown

After a 48-44 Week 1 loss to East St. Louis (Ill.), Christian Brothers College  — No. 1 in SBLive’s Missouri Top 25 — responded with a 49-2 win against O’Fallon (Ill.) in Week 2. It was the dominant performance the state of Missouri is used to seeing from the Cadets, and they’re hoping to rely on their multifaceted scoring attack to propel them by De Smet Jesuit, the No. 4 team in SBLive’s Missouri Top 25.

De Smet enters Week 3 coming off of a 32-17 loss to East St. Louis (Ill.) in Week 2, one of the toughest opponents on the schedule, just to play another heavyweight program. The Spartans started the season with a 44-point offensive outing against Edwardsville in Week 1, but East St. Louis managed to hold the Spartans scoreless at the half. A first half filled with woes probably won’t cut it against CBC, so they’ll be looking to capitalize on opportunities and minimize their mistakes.

“Just, when you play a team like CBC, who’s probably one of the best teams, if not the best team in the state of Missouri, hey, you got to bring it.” O’Fallon coach Byron Gettis Sr. told the St. Louis Post-Dispatch after the loss to CBC in Week 2.

Last season, Raytown put together a solid 8-4 record. With 16 returning starters in the fold, nine on offense and seven on defense, the Bluejays looked primed for a big year.

And based upon the results of the first two weeks of the season, that might just materialize. Raytown has opened with convincing road wins at North Kansas City (35-14) and crosstown rival Raytown South (48-6).

The uber-athletic Jays have displayed major offensive firepower in these first two games, and will be worth keeping an eye on in coming weeks. They will play at Fort Osage in two weeks followed by a home game against Kansas school Blue Valley Northwest.

Amid Lafayette (St. Joseph) capturing a 50-21 Week 2 win against Atchison (Kan.), quarterback Jaron Saunders and wideout Kingston Oliver knew they were bound to be etched in the record books.

They were as Saunders tallied 531 yards passing, or so he thought. The senior broke the program record when his coach told him he hit the 500-mark. After reviewing the game’s film, though, he realized Saunders actually threw for 698 yards, breaking the record set by North Nodaway in 2015 (665).

Oliver was on the receiving end of more than half of those yards, racking up 398 yards receiving against Atchison. That performance, similar to Saunders’, set a new MSHSAA record. The receiving-yard record was previously set by Princeton in 2016 (376).

“I couldn’t believe it,” Lafayette head coach Ryan Shroyer told St. Joseph News-Press. “I just went back and counted it again and counted again. The coaching staff sat down, we worked with each other, and we’re like, ‘Are you? Are you serious?’ We looked it up on MSHSAA, and we’re like, ’This is legit.’ It’s insane. So, it was a lot of fun.”

There’s no way to name everyone, but there are a few noteworthy individual performances from the Southwest Missouri area that deserve extra attention.

Joplin quarterback Always Wright has the best name in Missouri, but more importantly, he has led the Eagles to an impressive set of wins against ranked teams in the first two weeks of the season – against perennial power Webb City in the opener and Nixa this past week. Wright, a D-1 prospect in both football and basketball, passed for 201 yards and two touchdowns and also rushed eight times for 49 yards against Nixa.

In the same game, Nixa lost star running back Ramone Green to an injury. Forced to go to the air in Green’s absence, quarterback Connor Knatcal threw for 284 yards, 234 of which went to Kael Combs, a D-1 basketball prospect playing his first season of football, on nine receptions.

Carthage’s Luke Gall had quite a night rushing for 263 yards on 19 carries in last week’s win against Carl Junction. Perhaps more impressive, Gall racked up 188 of those yards on three touchdown runs (46, 77 and 65). Gall is one of the top two-way players in the state, as he has also led a first-team defense that has not allowed a touchdown through two games.

Hazelwood Central QB settles back in during battle of unbeaten

Bryson Brown started under center for the Hawks in their 48-0 win against Hazelwood East in Week 1. The senior wasn’t available for their Week 2 matchup against Pattonville, though coach Carey Davis said he’d be back for their Week 3 matchup on the road against Eureka (2-0).

Armani Turner took over quarterback duties for the Hawks against Pattonville and led the program to a 41-13 win. Turner had 106 yards on nine carries and was 3-of-7 for 11 yards and two interceptions.

“He surprised all of us,” Hawks senior Jamarion Price told the St. Louis Post-Dispatch about Turner’s performance. “He played very, very well.”

Brown’s return will be accompanied by a matchup with the Wildcats, who are hoping to hand the Hawks their first loss of the season.