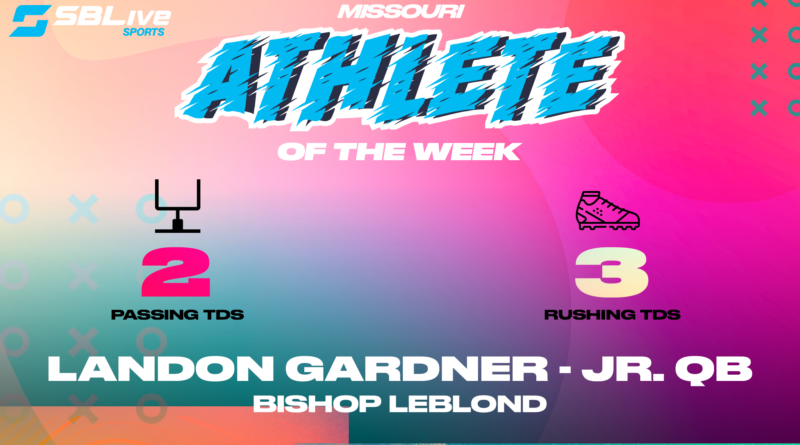 Congratulations to Bishop LeBlond quarterback Landon Gardner for being voted SBLive’s Missouri High School Athlete of the Week for Aug. 23-29!

The junior accounted for five touchdowns during LeBlond’s Week 1 win against Pattonsburg. His three rushing and two passing scores led the Eagles to a 70-20 win against the Panthers.

Gardner ran away with this week’s honor, receiving 89.58% of the total vote.

The Tigers junior setter tallied 106 assists during an eight-game outing at the Bentonville Early Bird Volleyball Classic Aug. 28. Probert nabbed 44 of those assists in a two-game span.

Luebbering, a senior defensive specialist for the Crusaders, totaled 20 digs during Helias’ 2-1 win against Central (Springfield) at the Branson Invitational Aug. 28. She averaged 5.1 digs per set throughout the Crusaders’ six games.

The senior safety nabbed a game-high 15 tackles during the Eagles’ 41-40 win against Webb City in Week 1. He added a forced fumble, in addition to his seven solo tackles.

Petruso scored the only goal during the Crusaders’ 1-0 victory against Vianney Aug. 28. The freshman didn’t start, but was subbed in before eventually hitting a 12-footer in the 60th minute.

Gillespie, a senior wideout, had three touchdowns receptions to go along with a rushing touchdown during the Comets’ 60-18 win against McCluer North in Week 1. On six touches, Gillespie amassed 167 yards of total offense and four scores.

Bartosh rushed for 208 yards and two touchdowns during the Panthers’ 42-14 win against Platte County in Week 1. The junior running back did all of that on a mere 15 carries.

The senior ace struck out seven batters and only allowed two hits during the Wolves’ 4-3 win against Warrenton in the opening round of the Troy Lead Off Classic.

The sophomore running back dashed for five touchdowns and 116 yards on 14 carries during the Eagles’ Week 1 win against Sherwood.

Crooker, a junior linebacker, tallied 17 tackles during a Week 1 win against Braymer. In addition, he had  two sacks in  the 64-20 point blowout.

Dryden put together eight kills on nine attempts to go along with six blocks during Barstow’s 2-0 sweep of University Academy Charter Aug. 28 in the Van Horn Tournament.

Sanderson’s two goals helped push College Heights past Laquey Aug. 28. The sophomore’s pair of shots was the difference in the 3-2 win.

Wattenbarger, a sophomore setter, served four aces during the Lions’ 3-1 win against Benton Aug. 28. She also compiled 31 assists across the four sets.

Despite a 20-14 loss in Week 1, the Hawkletes wideout grabbed six catches for 73 yards and a touchdown. O’Boyle’s one-handed touchdown grab was good enough to land at No. 4 on SportsCenter’s Top 10 plays on ESPN.

The senior defensive lineman had 6 ½ solo tackles, including three tackles for loss and a sack during the Tigers’ 21-6 win against Savannah in Week 1.

Last weekend at the Branson/Aurora Softball Bash, the junior ace dealt two complete games — both wins — and only surrendered six hits and two earned runs. She struck out 12 batters while pitching 11 innings.

The Wildcats senior running back tallied a game-high 358 yards rushing and four touchdowns on 24 carries during Harrisonville’s 38-37 Week 1 win against Wayne Hills, NJ. Reynolds’ performance was good enough for almost 15 yards per carry.

Taylor, a senior receiver and safety, reeled in four catches for 109 yards during the Bluejays’ 42-27 win against Lone Jack in Week 1. Two of his four catches were for touchdowns.

The Hawks extended their winning streak against rival Hazelwood East with a 48-0 win in Week 1, mostly due to Price’s efforts in the run game, which included three touchdowns.

To start the outside hitter’s junior campaign, Harrold compiled a hitting percentage of .460 during the Cardinals’ five-game outing at the KCI Tournament. Harrold’s 31 kills led Lawson to a 5-0 record before the first week of the regular season.

Coleman Jr., who is listed on the Dragons’ roster at receiver, primarily played quarterback during a 33-20 win against Lutheran North in Week 1. The senior passed  for two touchdowns in addition to the rushing touchdown he had.

Despite a loss, Kerby tallied 10 blocks during the Mustangs’ Aug. 20 matchup with Faith Christian Academy. She also had six kills and three digs..

Ladd, a junior setter, recorded 45 total assists during a five-set span across two matches in a tournament before the regular season started. At the time of publication, Ladd had completed five matches and 11 sets, in which she compiled 86 assists.