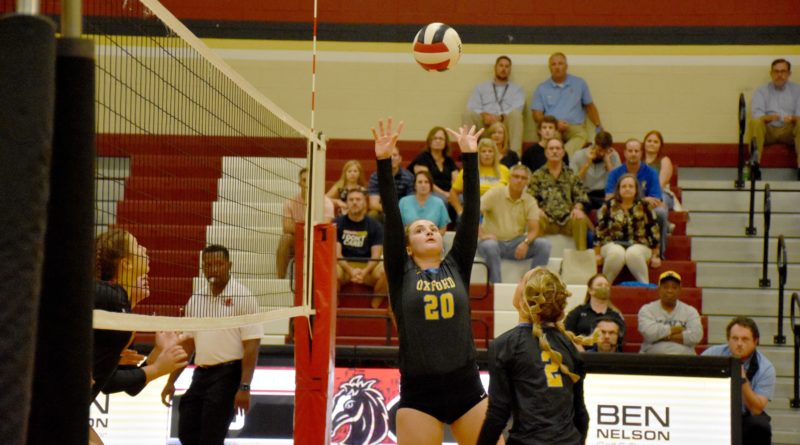 MADISON — The Oxford Lady Chargers are going to North State.

Behind the stellar play of Ainsley Tacke and Madison Jones, Oxford swept Germantown 3-0 (25-18, 26-24, 25-16) in the second round of the MHSAA Class 6A Volleyball Playoffs on Thursday night.

With the win, the Lady Chargers (28-2) advance and will host Madison Central for the Class 6A North State Championship at 6 p.m. Tuesday night.

“Our motto all season no matter who we’re playing is we are the underdogs,” Oxford coach Ashley Martin said. “The mindset for us is we have to play strong know matter how many sets you’re up. Nobody wants to go home at this point, so we all have to keep fighting and that’s what the girls did.”

The second set was back and forth, and neither team had a lead of more than three points. After fighting to a 14-14 tie, Germantown briefly grabbed the lead with two quick points, but Oxford came back to tie it at 16 and eventually take a 19-17 lead. The Lady Chargers increased their lead to 24-21 before Germantown scored three straight points to tie the match at 24. Oxford took advantage of two Germantown errors to take the set 26-24.

“Our kids have done a good job of fighting adversity and the second set we had a lot of that,” Martin said. “Second set was anybody’s to take, and the girls fought through and played really hard to finish the set and to put the game away. That’s something we’ve been working on is to put games away especially close games.”

In the third set, Oxford jumped out to a 5-0 lead and never looked back as they took the third set and the match with a 25-16 win.

Madison Jones had 19 digs, whiles senior Ainsley Tacke had 14 kills, 3 digs, a block and an ace to lead Oxford.

“I’m so proud of Madison of how she played defensively and she’s the leader of the back row,” Martin said. “We’ve been working really hard on mindset and covering and she’s done a really good job of that. I’m just happy we’re moving on and playing at home.”

Jade Fleming had 7 kills and 2 blocks to lead Germantown. Kaylee Lowther had 14 for the Lady Mavericks (24-10).

“We came out slow in the first set, the second set we had a couple of key hitting errors that took the momentum away and sucked the win out of us,” said Germantown coach Rita Sharpe. “We’re very young team with no seniors, so the future is bright here. Oxford is really good and their setter is phenomal.”