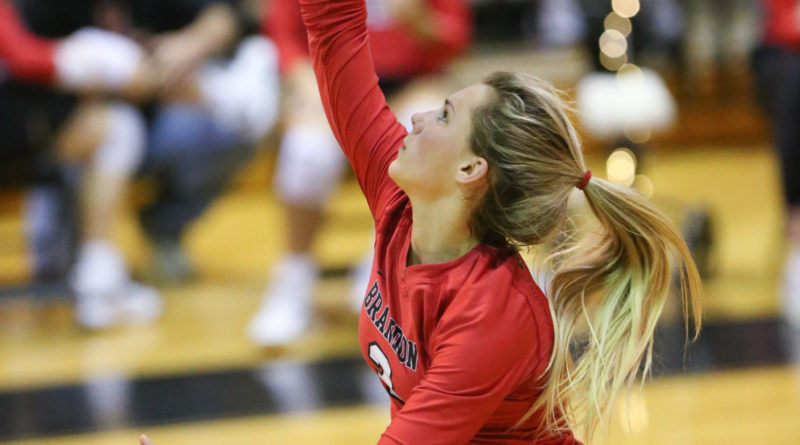 BRANDON — Brandon has been a team on a mission since losing to DeSoto Central in the 2020 6A State Championship. On Thursday night, the Lady Bulldogs took a huge step towards accomplishing that goal.

Brandon swept Gulfport in straight sets to pick up a huge 3-0 win and advanced to the South State Final.

“We’re ecstatic about it,” Brandon coach Kelsa Walker said. “My girls had seen a post online that this was a business trip for (Gulfport). Last year, we had them beat in three (sets), but we had a couple of bad calls and ended up going five. We knew it was going to be a dog fight, but I told them we had to keep our foot on the gas, and they did that tonight.”

Gulfport stormed back in the second game. The Lady Admirals (23-10) jumped out to an 8-5 lead early and looked ready to tie the match when Walker called a timeout and huddled on the court with her team.

The Bulldogs did win that next point, then won seven of the next eight to take control 12-9. Gulfport tied it back up at 16-16, but Brandon took nine of the next 13 points to take the second set 25-20.

“We wanted to come out as a team and play hard,” Brandon’s junior libero Sunni Sheppard said. “We had a shaky start to the playoffs earlier this week, so we came out tonight with a different mentality, ready to go to work and prove a point to everybody.”

The Lady Bulldogs completely dominated the third set. They took a commanding 13-3 lead and cruised to a 25-12 win to close out the match.

Brandon will face Ocean Springs next Tuesday night in the South State Final with a trip to the state championship on the line. The Lady Greyhounds swept Hancock on the road Thursday night, winning 25-19, 25-19 and 25-16.

Ocean Springs swept Brandon 3-0 back on Aug. 10, but all three sets were tightly contested, with the second one going to extra points.

“We’re so hype,” Brandon senior outside hitter Natalie Bartholomew said. “I’m ready to show Ocean Springs. We played them earlier in the year and they didn’t really have us, so we’re ready to give to them next Tuesday night.”

The second-round loss at Brandon was the second one in as many years for Gulfport, which didn’t have an answer for Brandon’s big front line Thursday.

Lady Greyhounds coach David Irwin said he was disappointed with the outcome, but pointed out his team has just one senior and would likely be back.

“We probably played two of our best games in game one and game two,” Irwin said. “They are just really good. You have to give (Brandon) credit. I don’t want to call it a dynasty, but they’ve had a lot of success. We played well and did what we wanted to do, then we stopped doing things well in the third game, and it showed.”