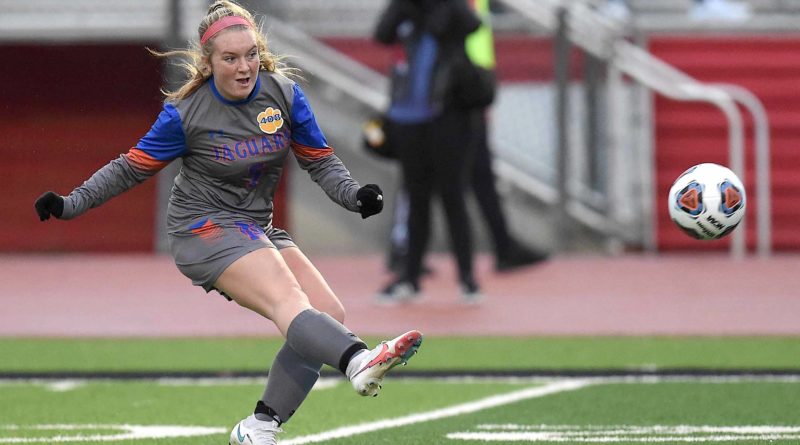 On Tuesday night two region rivals faced off looking to take the next steps toward securing a playoff spot.

The Germantown Lady Mavericks (11-5-1) dropped a heartbreaking 0-1 loss to region foe Clinton in extra time in early December. They rebounded with a nice 7-0 region win over Murrah, but their lone region loss had them in 3rd place in the region and on the outside of the playoffs.

The Madison Central Lady Jaguars (9-3-0) have no doubt had a rocky season. However, they showed up when it mattered most getting a PK shootout region win over Clinton. That win, along with a 7-0 win over Murrah, had the Jags sitting on top the region standings and firmly in the playoffs.

The thirty-degree weather did little to deter the intensity of the two teams early in the game. It was clear both teams knew what was at stake, however it was the Lady Jags who ultimately took control of the game starting in the 12th minute.

Lady Jag Olivia Tribolet took a shot from the top of the box that was deflected out for a corner. Tribolet jogged over and took the corner placing the pass in a dangerous area. Her teammate Akala Jacobs attacked the ball and headed it into the back of the net giving the Lady Jags the 1-0 lead.

The Lady Mavs attempted to immediately even the game back up in the 14th minute. A dangerous pass to forward Baleigh Brown had her behind the Lady Jag defense barreling towards goal. Lady Jag goalkeeper Lauren Baylor was quick off her line though cutting out the near opportunity.

The Lady Jags then resumed control of the game having several additional opportunities to extend their lead in the first half. Ultimately though the teams entered half with the Lady Jags up 1-0.

Madison Central made sure not to waste those chances in the second half. In the 42nd minute they found their second of the game off the foot of Akala Jacobs. Jacobs gave chase to a pass played over the top of the Lady Mavs defense. With a defender pulling her down Jacobs stood tall getting a shot off from 8 yards that she buried into the side netting.

Three minutes later the Lady Jags struck again this time via forward Olivia Tribolet. Tribolet cut in on her right and ripped a shot from 20 yards away that was nearly saved but ultimately found the back of the net.

The Lady Mavs got one back in the 47th minute when Ava Kelty placed a free kick from 35 yards away perfectly over the Madison Central goalkeeper’s head. This was to no avail however, as the Lady Jags and Akala Jacobs wrapped up the game in 62nd minute.

A perfectly placed corner from Anna Wheatly and another great header from Jacobs gave her a hat trick and Madison Central an impressive 4-1 win over their region rival.

Madison Central continued their winning streak with a 7-0 win over Center Hill on Saturday. They have three games to close the season including a matchup next Friday with former region rival Northwest Rankin.

Germantown bounced back with a 7-0 region win over Murrah. They will host St. Andrews on Tuesday night before finishing up the season with games against Clinton and Madison Central.

On Saturday, the Oxford Lady Charges (10-4-1) traveled to the Jackson Metro to face off against the Northwest Rankin Lady Cougars (12-1-2). The Lady Charges suffered a 2-5 defeat to Lewisburg on Tuesday night before rallying with a pair of region wins over Grenada.

The Lady Chargers did come out with a lot of energy to start the game, led by forward Parker Martin. Martin got off a pair of dangerous shots in the 1st and 7th minute including a rocket that came off the top of the crossbar but stayed out of the goal.

As the game continued the Lady Cougars settled in and began dominating possession which eventually led to goal scoring chances. This included in the 25th minute when Emily Welch sent in a dangerous cross that the Oxford goalkeeper could not corral. The ball fell to Kate Gray Nesbit who got a shot past the keeper but was cleared off the line by Oxford defender Alexis Trimble.

Trimble made yet another goal saving defensively play in the 33rd minute when the Lady Cougar’s Emily Dixon got behind the Oxford defense and was seemingly 1 on 1 with just the goalkeeper to beat. Trimble made a sprinting 20 yard recovery that resulted in her stopping the chance with a great slide tackle.

Northwest Rankin closed the half with a chance that came off the post, but the ball stayed out of goal and the two teams entered the half even at 0-0.

The Lady Cougars were electric coming out of the halftime break scoring two goals in the first five minutes. This included one in the first minute of the half when Tyler Grace Sims beat her defender on the wide left side of the field. She then put a perfect cross in that was right in the path of KK Morris. Morris smashed the finish home from the PK spot into the top of the netting.

The second for the Lady Cougars came three minutes later when Morris played a great pass to teammate Emily Dixon from the top of the box. Dixon cut in on her right foot and buried the finish in the right corner from 10 yards away.

Morris completely shut the door on the game in 53rd minute when she scored off another cross from Tyler Grace Sims giving her team a commanding 3-0 lead.

The Lady Chargers continued to battle and seemingly had a goal off a corner in the 77th minute by Ivy Dennis but this goal was called off due to a foul on Oxford. The game ended shortly after with Northwest Rankin yet again showing their strength in a 3-0 win.

Northwest Rankin will take on region rival Pearl on Tuesday night, a team they beat handily 4-0 earlier in the year. They will then be tested by a strong Madison Central team on Friday night.

Oxford will make the trek back north to prepare for a major region rematch against Tupelo. The first game was a heated matchup they lost 1-2 in early December.