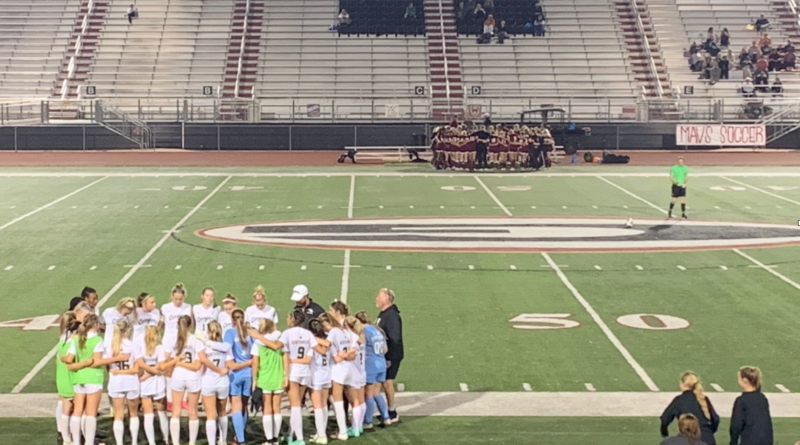 Here’s a look at the weekly girls soccer wrap for the week of Nov. 28 to Dec. 4.

The Northwest Rankin Lady Cougars (8-0-1) made a short trip north on Thursday night to face off against the Germantown Lady Mavericks (8-3-1). There was a big-game feeling with both teams having strong starts to their seasons.

The Lady Cougars intended on continuing their perfect season. They have not been easy wins either, with victories over Brandon, Florence, and Oak Grove High Schools. The Lady Cougars were playing like a team intent on making a deep playoff run.

The Lady Mavericks had a bit of a rocky start to the season. They lost to Lewisburg and Lafayette to start the year, but were back on track with eight wins in a row going into Thursday.

The Lady Mavericks started the game with a lot of energy. Forward Baleigh Brown applied pressure to the Northwest Rankin backline, and nearly had a chance on a ball over the top in the third minute.

It did not take too much longer for the Lady Cougars to settle into the game and start creating dangerous chances. This included Tyler Grace Sims having a chance in the ninth minute. She stole a pass and got a dangerous shot off from the right side of goal that was nicely saved by the Germantown goalkeeper.

The breakthrough came for the Lady Cougars in the 28th minute. Mallory Tapper stepped up to a free kick from 50 yards away, nearly at midfield. Too far out for a shot, right? Not for the Southern Miss signee. Tapper blasted a shot that soared directly over the Germantown goalkeepers head and into the net. The center back was also playing great defensively, and her goal was the lone difference in the teams at half.

The Lady Mavericks again came out with a ton of energy in the second half, which led to an equalizing goal. In the 41st minute ,forward Baleigh Brown played a nice outlet pass wide to teammate Mary Logan Clark. Clark hit a great cross straight to the backpost, where Lily Frazier pounced and tied the game 1-1.

Northwest Rankin answered with the go-ahead goal in the 63rd minute, after applying pressure to the Germantown defense. Abbi Hornke held the ball up well in the Germantown box with her back to goal and laid off a perfect pass to teammate Tyler Grace Sims. Sims ripped a shot from the top of the box into the top right corner of the goal.

Germantown had a flurry of chances in the finals seconds of the game, but ultimately nothing came of the scramble. Northwest Rankin were 2-1 winners in a really competitive game between two quality opponents.

Northwest Rankin welcomed a talented Lewisburg team on Friday night which ended in a 1-1 draw. They now turn their attention to region play as they will matchup with Pearl next Tuesday.

Germantown will make a pair of short trips next week. One to Ridgeland next Tuesday and then a huge region opener against Clinton on Friday.

On Tuesday night, two powerhouse Jackson metro teams faced off in the Clinton Lady Arrows (5-3-2) and the Brandon Lady Bulldogs (6-4-0).

The Lady Arrows entered the game with one lone loss — a 1-3 defeat to defending 6A State Champion Gulfport. They had tallied impressive wins over Tupelo and Oak Grove and were looking to add another impressive win against Brandon.

The Lady Bulldogs season had been a roller coaster ride. It had its ups, with wins over Madison Central and Starkville. The downs included losses to Northwest Rankin, Florence, and most recently Lafayette. Tuesday night was a chance for Brandon to get things back on track, and they took advantage.

The Lady Bulldogs really grew into the game around the 10th minute, when they began to create chances. This led to the game’s opening goal in the 16th minute, when Lauren Entremont received the ball at midfield, urned and beat her defender with a great touch. She was off to the races with only the goalie in front of her, and Entremont snuck the ball right past the Clinton keeper to give Brandon the 1-0 lead.

Brandon extended their lead in the 28th minute off a great goal from Neely Garrett. Carleigh King, who was a constant threat for Brandon, got behind the Clinton defense and beat the keeper to the wide right side of the field. She then played a pinpoint perfect cross to Garrett. Garrett made no mistake about it, smashing home the finish and ultimately giving Brandon a 2-0 lead at half.

Clinton came out with a lot of energy in the second half, clearly eager to get back in the game. Led by seniors Addison Pletzke and Tailynn Remmel, the Lady Arrows started to generate more chances. This included shots on goal from Remmel in the 42nd and 45th minute and several threatening passes from Pletzke, who seemed to always be the spark in the Clinton attack.

The Lady Arrows eventually drew one back in the 62nd minute. Forward Jakiya Michael hit a screamer of a shot from inside the box that was saved, but spilled, by the Brandon goalkeeper. Cooper Holmes then poked it past the keeper to Kayla Jones who scored the goal, getting Clinton back in the game at 2-1.

Clinton had several last-ditch efforts to salvage a draw late in the game, including a shot on goal from Remmel in the 77th minute and a high-arching shot from Zoie Zumbro in the 79th minute. Brandon’s defense stood tall though and ultimately the Lady Bulldogs walked away with an impressive 2-1 win.

Brandon defeated Sacred Heart on Thursday night by a score of 3-0. They now look ahead to Madison Central next Tuesday in a rematch of a game they won in thrilling fashion earlier in the season 4-3.

Clinton completed their five-game road trip over the weekend with a win over Warren Central on Friday night and a 0-1 loss to Florence on Saturday. They’ll match up with two regional opponents this week: Murrah on Thursday and Germantown on Friday.