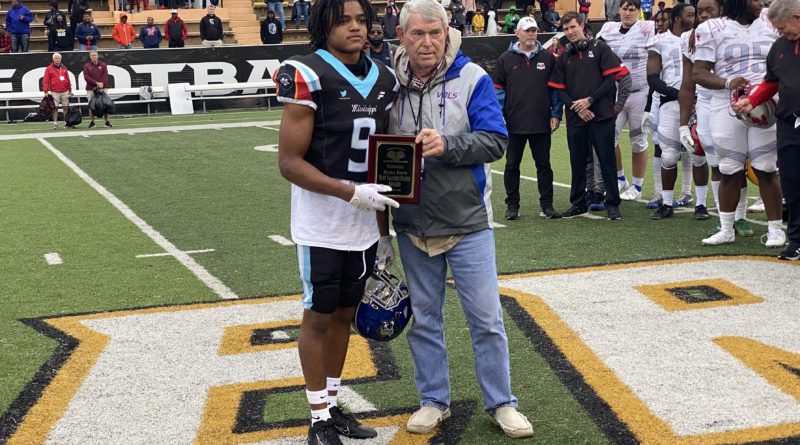 HATTIESBURG — Mississippi’s brightest football stars certainly looked the part as they took the field Saturday against their counterparts from Alabama in the annual Mississippi-Alabama All-Star Game.

The problem was, so did Alabama.

The Alabama defense dominated en rout to a 20-0 win, harassing quarterbacks Kabe Barnett and Zach Wilcke all day and holding the Mississippi offense to 117 yards on 56 plays.

“It was a tough one out there, for sure,” Wilcke said. “We had a pretty good week of preparation. I just wanted to learn as much as I could from these guys and I felt like we had good practices all week. It was just rough out there today.”

Wilcke, of Hernando High, and Oak Grove’s Barnett combined to complete 15 out of 32 passes for 62 yards with two interceptions — both from Wilcke, who played on the field at Roberts Stadium in Hattiesburg for the first time. He said afterwards he still plans to sign with the Golden Eagles when the early signing period begins Wednesday (Dec. 15).

“I wish it had gone better,” Wilcke said. “But it’s cool to play my first game here, knowing there will be many more.”

The list of offensive leaders was short for Mississippi — Wilcke and Laurel tailback Kiron Benjamin tied for the team lead in rushing yards with 16, and Horn Lake’s Janorris Hopson led the team in receiving with three grabs for 23 yards.

Defensively, there were several standouts.

Poplarville’s Khalid Moore played a hybrid defensive end/outside linebacker after playing with his hand on the ground all season for the Hornets. In what should come as a surprise to absolutely no one, he excelled, tallying six tackles, intercepting one pass and batting down another. He was also credited with 2.5 tackles behind the line.

“It was similar, but still different,” said Moore, who plans to sign with Mississippi State Wednesday. “I was still lining up on the line, but I had to get the drops down, cause I wasn’t asked to do that very much this year. About our second practice of the week, it just clicked for me and it felt more natural today.”

Crystal Springs lineman Trevion Williams had a big game as well, racking up five stops (including a sack and 2.5 tackles for a loss). Lafayette’s Mario Wilbourn had six tackles, including four solo stops.

Hartzog was playing at “The Rock” for the second weekend in a row after leading his Jaguars to a 3A state championship last week on this same field. In between that game and Saturday’s, he took an official visit to the University of Nebraska. He holds no offers from any of Mississippi’s “big three” universities.

“It doesn’t really motivate me that much,” he said when asked about his recruiting situation. “I was more motivated to come out and represent my team and my state today. It feels great to be named MVP, too.”

Team Alabama was led offensively by McGill-Toolin’s shifty halfback Braylon McReynolds, who ran the ball 13 times for 98 yards. The University of South Alabama commit was the only player on either team to average better than 3.6 yards a carry.

Quarterback Zach Pyron, a big 6-foot-3 prospect from Pinson Valley who is committed to Georgia Tech, completed seven of 11 passes for 91 yards. Receiver Kobe Prentice — from Calera, Ala. — caught a game-high four passes for 64 yards. He’s set to sign with the University of Alabama on Wednesday.

Oxford (Alabama) safety Miguel Mitchell made the play of the game with a 52-yard interception return in the second quarter that put Alabama ahead 10-0. He took home MVP honors for Alabama.