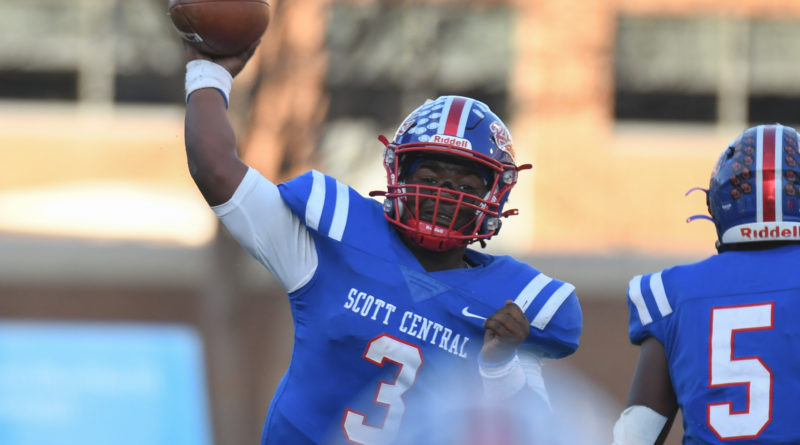 HATTIESBURG — Scott Central and it’s superstar quarterback Quez Goss averaged 40.6 points a game in the regular season this year, so it wasn’t a surprise when they hit the 42-point mark against Leflore County in the MHSAA Class 2A Championship Game.

The surprise was that it came 12 seconds into the second half.

The Rebels put the finishing touches on an absolute masterpiece of a season, beating Leflore County 72-24 in a game that set tied the MHSAA record for margin of victory (48) and set a new record for total points for one team.

Goss was the star — the sophomore completed 17 of his 24 passes for 350 yards and six touchdowns and rushed 22 times for 103 yards and two more scores.

The game started rather inauspiciously for the Rebels: Leflore County forced a three-and-out on Scott Central’s first drive, and Zechariah Parodi’s punt traveled only four yards, setting up Leflore County at the Rebel 10-yard line.

When Dekari “Turbo” Johnson snuck into the end zone from four yards out four plays later and Dezmond Ray ran it in for a two-point conversion to put the Tigers ahead 8-0, it looked like the Tigers (10-3) were thinking about he upset.

But Goss rushed over right tackle for 12 yards on the opening play of the second possession, then hit Javieon Butler in stride with a beautiful throw over the outside shoulder for a 48-yard touchdown. Parodi made up for the poor punt with a two-yard plunge for the extra points to tie the game.

Whatever the change, it worked, and once the Rebel offense got it going, it was all gas and no brakes.

The Rebels put up 26 points on four touchdowns in the second quarter, 14 on two third-quarter scores and 24 more on two offensive touchdowns and a blocked punt return in the fourth quarter.

The Rebels scored touchdowns on nine of their last 10 possessions. The defense forced five turnovers — two on downs, two on fumbles and one interception by Jhatavious Slack.

Javieon Butler was Goss’s favorite receiver. He caught six passes for 142 yards and two touchdowns. Dee Burks caught five for 88 yards and two scores. Patrick Sessums caught four balls for 24 yards and a score, and Antreyvious Edwards caught one pass — an 82-yard bomb for a touchdown.

And that’s pretty much what the Rebel offense looked like all season.

“This wasn’t a rebuild,” Scott Central coach Jeff Stockstill said. “When I coached at Raleigh we were a run-first team that prided itself on solid defense, and I was determined to build the same type of team at Scott Central. Then I walked into the locker room for the first time and the shortest receiver we had was 6-foot-2 and I said ‘Looks like we’re going to be throwing it around.’”

Leflore County never could recover after the Rebels initially hit them in the mouth.

The Tigers had just one significant, sustained drive the entire game. It came late in the third quarter, when the Leflore offense went 60 yards in six plays and scored on a 39-yard touchdown pass from Dequarionne Jones to Johnson.

Johnson actually accounted for all three of Leflore County’s touchdowns — his third came in the fourth quarter on a 70-yard kick return. He finished the night with 218 all-purpose yards.

“Scott Central was everything they were advertised to be,” Leflore County coach Eric House said. “They are a great football team. They have the best receivers we’ve seen all season by far, and that quarterback is a special, special player. I’m proud of my guys, though. We came down here to compete, and I thought we did that for four quarters, but the better team won tonight.”