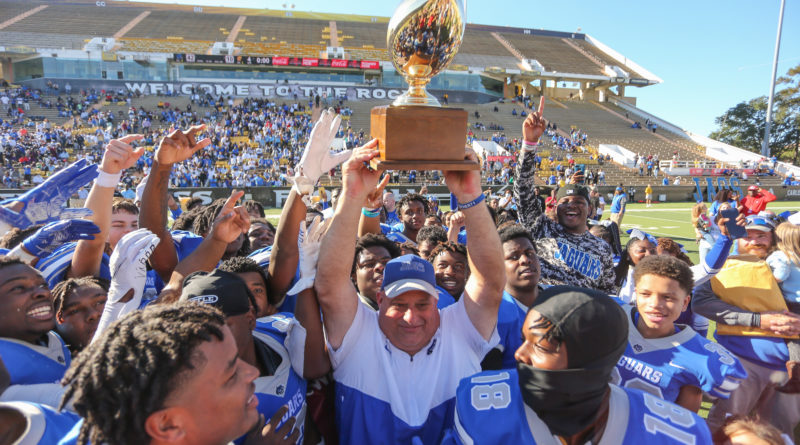 Riding the legs of Demarrio Booth and reigning 3A Mr. Football Malcolm Hartzog, the Jaguars ran over, through and away from Amory in a 42-10 rout in the MHSAA Class 3A Championship Game Friday afternoon at M.M. Roberts Stadium.

The Jaguar tailback duo combined for 336 rushing yards and six touchdowns. Booth took home Most Valuable Player honors after gaining 205 yards on 17 carries with four touchdowns and recording an interception and one tackle for a loss on defense.

“We never lost sight of winning this state championship, even after we started 0-4,” Booth said. “We just kept believing and took care of business and we didn’t lose a single game down the stretch.”

The Jaguars (10-4) took an early 7-0 lead when Hartzog scored his first touchdown less than three minutes into the game with a 1-yard touchdown to cap a four-play, 26-yard touchdown drive following an Amory fumble.

Booth added his first touchdown — a 44-yard scamper — five minutes later to put the Jaguars ahead 14-0 with 4:25 left in the first quarter.

Amory (10-4) fought back and cut it to 22-10 by halftime thanks to a 57-yard touchdown pass from Jatarian Ware to Cameron Haynes and a 28-yard field goal from Dylan Thompson, but that was as close as the Panthers got.

Hartzog added a 19-yard touchdown run on the Jaguars’ first possession of the second half, and Booth added two more third-quarter touchdowns to put the game on ice.

“It feels amazing to win a state championship,” Hartzog said. “And it feels great to see Demarrio do what he did today. He’s my brother forever.”

The state championship was the ninth for Jeff Davis County coach Lance Mancuso, who won his third state title at Jeff Davis County Saturday after winning six at the helm of the now-defunct Bassfield program before the school consolidated with Prentiss to form JDC in 2016.

“I’d like to take credit, but it’s really all about these kids,” Mancuso said. “I’ve been lucky enough to be the head coach of nine amazing football teams, and this group this year was no different. It’s just a collection of great kids and great players who deserve everything they’ve achieved.”

The loss was a real heart-breaker for Amory, which had won eight in a row coming into Saturday’s championship game.

The Panthers had some success early in the game offensively, averaging 8.8 yards a play headed into the second quarter, but struggled to throw the ball after falling behind.

Ware completed 10 of his 28 pass attempts for 139 yards with the touchdown and three second-half interceptions. The Panthers’ splendid tailback Charleston French rushed 13 times for 125 yards but did not find the end zone.

“We just couldn’t afford to turn the ball over early in the game like we did,” Amory coach Brooks Dampeer said. “Then after halftime we didn’t do as good of a job controlling the line of scrimmage as we had all year. I’m proud of this team though — we beat some really good teams to get here.”