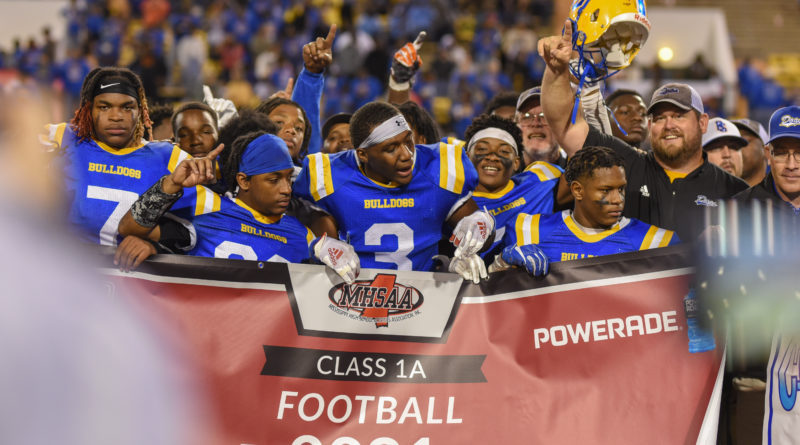 HATTIESBURG — Bay Springs is bringing home the Golden Ball for the first time in school history.

The Bulldogs got a stellar second-half performance from tailbacks Anthony Ross and Tyrick Jones and took advantage of Simmons’ mistakes to erase a halftime deficit in route to a 32-12 win in the MHSAA Class 1A Championship at M.M. Roberts Stadium Friday night.

“I’m just so proud for our kids and our community,” Bay Springs coach Dan Brady said. “They bought in and worked hard all year, and this championship is for all those teams that came close to doing this in the past.”

The biggest play of the game came in the third quarter with Bay Springs leading 16-12. Simmons’ quarterback DeVontae Rush had a 30-yard touchdown run called back for an illegal block, which backed the Blue Devils up to the Bay Springs’ 16-yard line.

On the next play, Simmons snapped the ball 23 yards past Rush, who recovered the loose ball but was injured on the play. The backup quarterback Jermaine Edwards threw an interception on the very next play.

“That was a huge sequence for us,” Brady said. “We made the play in the backfield there and then Jamare Holliday made a heckuva play and came from the other side of the field to make the play on the interception.”

Bay Springs (12-1) never looked back after that. Ross capped a five-play, 90-yard drive on the ensuing possession with a 34-yard touchdown run to put the Bulldogs ahead 24-12, and Tyrick Jones added a late touchdown to give Bay Springs the 20-point lead with 2:10 left to play.

“We just did what we’ve done all year,” said Ross, who earned MVP honors after rushing for 220 yards on 20 carries with two touchdowns. “We’ve run the ball well all year, and we didn’t get down when we fell behind early.”

But the big plays didn’t come for Simmons in the second half, at least none that weren’t called back due to penalties.

“We lost half the team to injuries in the second half,” Simmons coach Tavares Johnson said. “It is what it is. All we can do is go back to the drawing board.”

Anthony Newell led the way for the Bay Springs defense with 10 total tackles. Zyon Ross and Cartize Booth both tallied two tackles for a loss and Holliday picked off a pair of passes.

“We’ve been to at least the South State Championship four times before this,” Brady said. “I knew we had a good opportunity to win it this year. Everyone wanted to talk about Simmons and how good they were — and they are a great football team — but we felt like our advantage was that we had been in some dog fights earlier this year, and we found a way to win.”