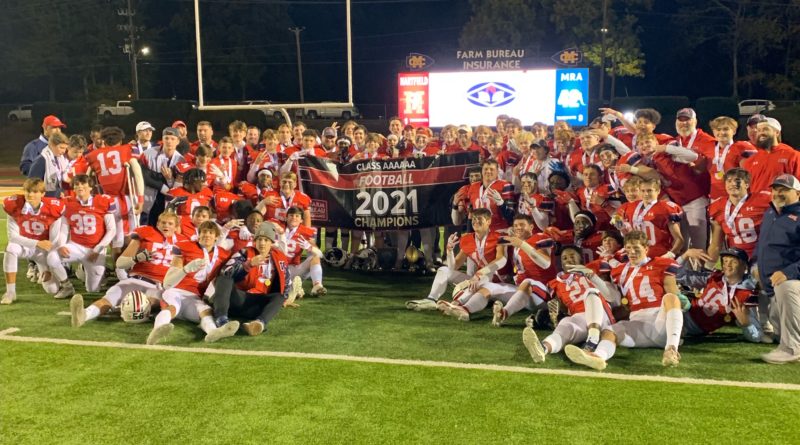 Behind a stellar offensive attack led by quarterback John White and running back Quincy Phillips, the MRA Patriots raced past Hartfield Academy 42-7 to claim their third-straight MAIS Class 6A Football State Championship at Mississippi College’s Robinson-Hale Stadium on Saturday night.

“We’ll enjoy this one, but we’ve got keep building. Right now, what we got is special, and hopefully the kids will understand that and keep working,” said MRA head coach Herbert Davis. “Proud of our kids and proud of our program. Three in a row, it’s never been done before.”

The Patriots struck first on a 48-yard touchdown pass from White to Pax Hughes with 7:35 left in the first quarter to give MRA a 7-0 lead.

Hartfield’s only touchdown came with 1:47 left in the first quarter on a Xavier Davis 8-yard touchdown run to tie the game 7-7.

MRA quickly responded with a three-play 69-yard drive capped off by a Phillips 7-yard touchdown run to take a 14-7 lead with 1:10 left in the first quarter.

Phillips added a 3-yard touchdown run with 55 seconds left before halftime to give MRA a 28-7 lead.

White connected with Street Toler 10-yard touchdown pass to give the Patriots the 42-7 lead with 8:11 left in the fourth quarter.

White finished the night 17-of-26 passing for 273 yards with two touchdowns. Toler had six catches for 105 yards with a touchdown.

“John had another great game throwing, and we got some receivers that can go get it and we’re for sure going to miss those guys,” Davis said. “We had a lot of stuff to do in tonight offensively and had to fix somethings at halftime, but we had a great game offensively.”

““We felt coming in we could have good game running the ball tonight, and that’s what we did,” Davis said. “We kept finding ways to keep fighting and make plays and that’s what happened.”

The MRA defense turned Hartfield over on downs deep in the red zone and intercepted a pass in the second quarter.“We knew coming in we had to by physical and had to get turnovers to get the ball to our offense and that’s what we did,” said MRA five-star linebacker Stone Blanton. “It’s amazing. This is all a kid could want growing up winning three in a row for the first time school history.”

Davis had 105 yards rushing to lead Hartfield. Quarterback Cruz Garner had 117 yards passing for the Hawks (9-3).

“We had to play a clean game tonight and we didn’t. MRA is really good at capitalizing on your mistakes, and they did that tonight,” said Hartfield Academy coach Craig Bowman. “We got out of our game plan early when we got behind and constant had to play catch up. We can build a lot from this, but we wanted to win it really bad, but MRA is a really good football team and we have to raise the bar in our standards.”