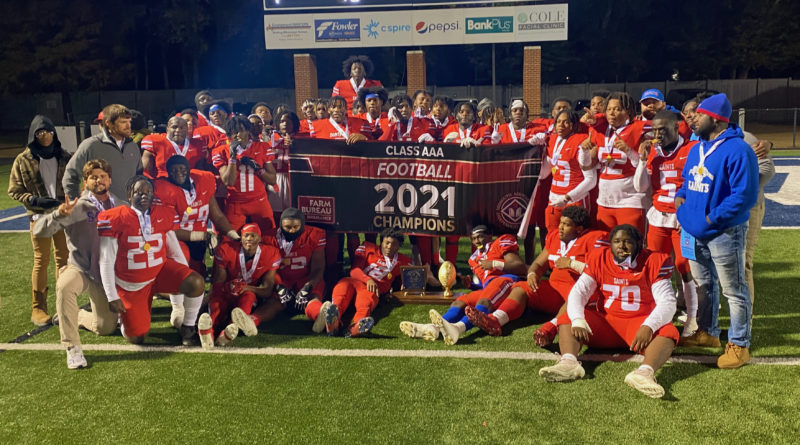 JACKSON, Miss. — There will be other MAIS Class 3A Champions in the future, but they’ll be hard-pressed to be as special as the Greenville Christian team that lifted the trophy after Thursday’s 46-6 win over Canton Academy.

These Saints (13-1) — with a roster made up of transfers from public schools from all over the Mississippi Delta who came together after COVID-19 — changed the face of the MAIS these past two years, beating perennial powerhouses like Madison-Ridgeland Academy, Jackson Academy and defending MHSAA 6A Champion Oak Grove.

“It’s really kind of sad to see it end,” Greenville Christian coach Jon Reed McClendon said. “It’s been an amazing two years and it’s incredible what this team has been able to accomplish.”

If it is the end of the Greenville Christian mini-dynasty — the Saints did play 22 seniors Thursday night — then what an end it was.

The Delta boys whipped Canton Academy almost from the opening whistle. “Almost” is doing a lot of work there, because really, it was all downhill after Canton Academy’s opening drive.

The Panthers (10-4) came out determined to shorten the game with long drives and keep the Saints’ explosive offense off the field. Their opening drive was methodical, running 7:59 off the clock as they moved from their own 25-yard line to the Greenville 36.

But Greenville got a turnover on downs, and the downpour of points began. It took the Saints 79 seconds to go 64 yards for the touchdown, thanks to a 41-yard touchdown run by quarterback D.J. Smith.

Canton Academy fumbled on the next play of the ensuing drive, and Smith promptly hit receiver Chris Bell for a 30-yard touchdown to put the Saints ahead 14-0 at the end of the first quarter.

And so it went — the Saints scored twice more in the second quarter to take a 30-0 lead into the half and salted it away in the second half with a running clock late in the game.

Smith was the big star of the night — he completed nine of his 13 passes for 188 yards and three touchdowns and rushed 11 times for 132 yards and two more touchdowns.

“These past two years are the best thing that’s ever happened to me in my life,” said Smith, who holds scholarship offers from Southern Miss and Arkansas State. “It’s crazy and I can’t really explain it, but it’s been the best thing to ever happen to me and I’m so glad I got to experience it with this group of guys. We’re family now.”

Smith was far from the only star for Greenville. In fact, all of their top college prospects played a big role Thursday.

Bell, a three-star wide receiver prospect, had three catches for 52 yards, including the 30-yard touchdown. Linebacker J.T. Stewart, another three-star prospect, made five tackles, including one tackle for a loss and a sack.

The other big wideout, Ladarius Davenport, caught two passes for two touchdowns — one for 55 yards and the other for 16.

Canton Academy had a frustrating night offensively as their Wing-T offense hit a bit of a wall. The Panthers gained just 139 yards and six first downs. They were 2-for-13 on third down and 2-for-5 on fourth down tries. They ended up dominating time of possession nearly 3-to-1, but it didn’t matter.

Canton’s one touchdown came halfway through the third quarter, when Marcus Goodloe scooped up a fumble and rumbled 15 yards for the score.

“It was a tremendous challenge for our guys,” Canton Academy coach Gage Posey said. “I mean, it would have been easy for our guys to come out here and give no effort. But they fought and fought and fought. They never quit and they came out after half and got the defensive touchdown. It just speaks volumes about these seniors on this team. They played with pride.”