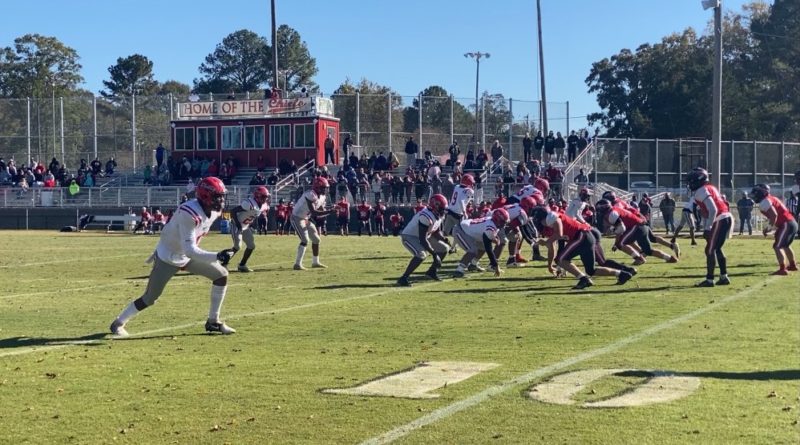 PELAHATCHIE — You’ve heard of coaches making second-half adjustments, but what about next-day adjustments?

That’s exactly what both coaching staffs experienced Saturday, as Pelahatchie held on to beat Philadelphia 39-35, roughly 19 hours after the game began Friday night.

With 5:11 left on the clock in the third quarter Friday night, Pelahatchie’s Jacob Ragsdale was running in the open field en route to a 60-yard touchdown when a transformer just beyond the north end zone exploded, sending sparks flying 10 feet in the air and plunging the entire stadium into darkness.

“It was kind of crazy, but we didn’t like it because we felt like we had the momentum when it happened,” Pelahatchie coach Ryan Keeton said. “But it was one of those things you just can’t control.”

Ragsdale’s run was wiped off the ledger, and after some discussion, both coaches agreed to resume the game at 1 p.m. Saturday.

Philadelphia bussed back home, making the 90-minute drive before watching film from the first half before turning in for the night.

“I think I got home around 2 a.m.,” Philadelphia coach David Frey said. “We wanted to give our guys every chance to win, and we thought they might make some adjustments based on the first half.”

When they resumed play Saturday, both teams had done exactly that, but the outcome ended up being the same.

Pelahatchie’s Quay Ragsdale, Jacob’s twin brother, busted a 46-yard touchdown run to put Pelahatchie ahead 33-20 with 3:19 to go in the third quarter.

Philadelphia bounced back with quick score to trim that lead back to 33-27, then got a stop on defense to get the ball back at their own 19-yard line with 11:10 left in the game.

But the Pelahatchie defense stood tall and forced a punt from the 18-yard line, and Quay Ragsdale made them pay. The 6-foot, 175-pound senior fielded the punt, found a seam down the home sideline and housed it for a 45-yard punt return to give Pelahatchie the 39-27 lead.

Philadelphia drove 60 yards on the ensuing drive, and quarterback Marcus Beamon punched it in from the 1-yard line to cut the Pelahatchie lead to 39-35 with 7:08 to go.

The Philly defense gave the Tornadoes (5-7) a chance to win it late, forcing a punt to get the ball back with 1:01 left, but the game ended with a turnover on downs after three incomplete passes and a stuffed option-run attempt on fourth down.

“In the fourth quarter, I felt like the pressure of the moment kind of got to us,” Keeton said. “But a credit to my kids — they kept playing and kept plugging away and it worked out for us.”

With the win, the Chiefs (7-5) advanced to the third round of the 2A North Playoffs for the first time in 20 years. They’ll face Kemper County in the North State Semifinal next Friday night.

The Tornadoes’ loss was their fourth in five games, but Frey said he’s optimistic about the future in Philadelphia.

“I don’t think many people gave us a chance to get this far this season,” he said. “We started a bunch of ninth graders on defense all year, and I’m still disappointed in this one because I feel like we’re good enough to still be playing next week.”