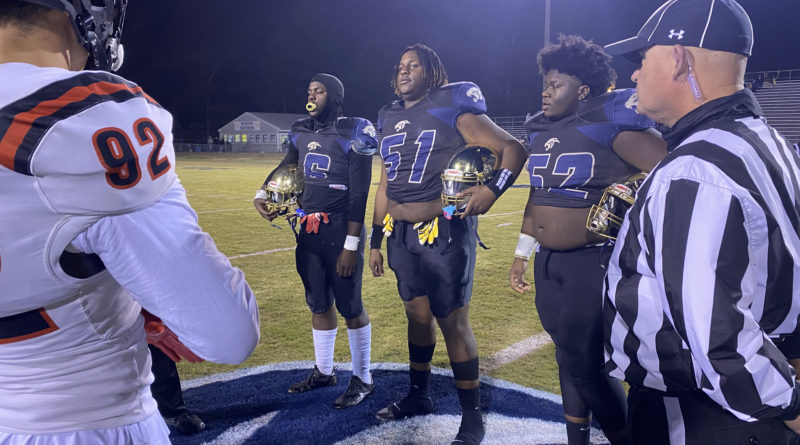 MORTON — Morton is moving on to the second round of the 3A South Playoffs, but nothing about their 42-31 first-round win over St. Stanislaus came easily Friday night.

The Panthers erased an early 14-7 deficit and led the Rock-a-chaws 41-17 in the third quarter before hanging on for the the 11-point win.

“We played sort of sloppy but we played hard,” Morton coach Sean Gerald said. “We made a lot of mental mistakes. We made some big plays, but we never had that 12 or 13-play drive and controlled the ball the way we wanted to, and St. Stanislaus had a lot to do with that — they were a physical team with the best offensive line we’ve played this season. They blocked us all night.”

With the win, the Panthers advance to the second round to face Raleigh (8-1), which defeated Wilkinson County 43-0 in their first-round game Friday night.

Morton (6-5) will be considered big underdogs in that game, but that’s just fine with Gerald, who told his team they should relish the opportunity to pull the upset.

They played like it at times Friday night, especially when they had the football.

The Panthers rolled to 551 yards of offense despite losing their starting quarterback on their first offensive play of the third quarter. Tailback Robert Jennings — who his an absolute load — paced the Panthers with 145 yards on 33 carries with two touchdowns on the ground and a 71-yard touchdown pass on a trick play on the first snap of the game.

Starting quarterback Madden Gerald was 15 of 21 for 263 yards and two touchdowns in the first half. When he went down with an ankle injury — which kept him out until late in the fourth quarter — his backup Tamarion Burton came in and picked up right where Gerald had left off.

Burton led back-to-back touchdown drives of 75 and 51 yards, completing seven of his 10 passes for 85 yards. He also caught a 45-yard touchdown pass.

“It feels good to be moving on,” Jennings said. “We felt good with either quarterback back there. It’s just next man up and we have confidence.”

Davien La Garde rushed 13 times for 87 yards and returned a blocked field goal 90 yards for a touchdown for St. Stanislaus (4-6), but the Rocks had to throw the ball basically the entire second half after falling behind by three touchdowns. Quarterback Alex Fabra was just 6-for-10 for 66 yards with an interception in the first half, but finished the night 14 of 31 for 265 yards with two second-half touchdowns.

“It would have been easy for us to lay down after falling behind 41-17,” St. Stanislaus coach Nate Encrapera said. “But we try to instill in our guys ideas like perseverance, responsibility and determination — things that we think will benefit them off the football field and later in life — and I think that’s what you saw there in the second half. We kept fighting, but we just couldn’t overcome some costly mistakes.”

The Rocks turned it over on fumbles twice and Fabra threw two interceptions.