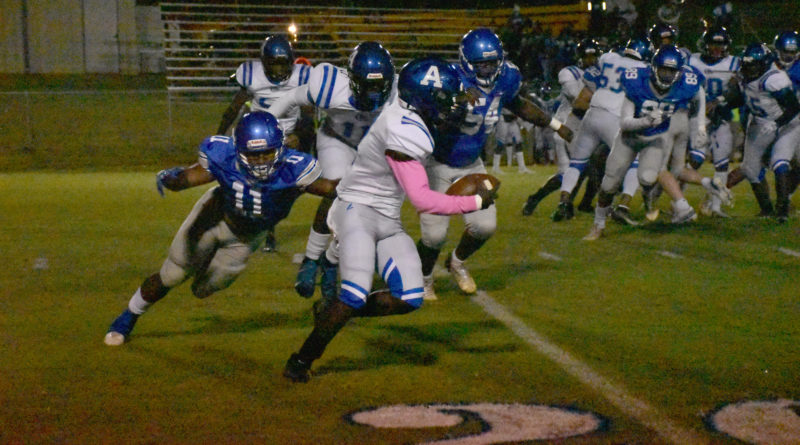 WATER VALLEY — Aberdeen used its ground game to control the majority of Friday night’s opening-round playoff game against Water Valley. But when the chips were down and the Bulldogs found themselves trailing late, they made the defensive plays when they needed it most and escaped with a 12-9 MHSAA Class 3A playoff win over the Blue Devils.

Quarterback Jermaine Strong provided the majority of Aberdeen’s offense with his dual threat capabilities. He threw two touchdown passes, each to Jenari Bell in the red zone. But the story of the night was what the Bulldogs were able to do defensively to give them extra chances while the offense sputtered with penalties and turnovers.

“We challenged those guys all week,” Aberdeen coach Alex Williams said. “We haven’t been playing well on defense late this season. Our attention to detail wasn’t there at times. They came out and played inspired football… This is the type of game we like. We like it down and dirty. We want to play a lot of defense, run the ball and give ourselves a chance in the end.”

It was an offensive struggle throughout Friday’s contest, but more so early in the game. Both teams traded punts with the few highlights being an interception by Water Valley’s Saveon Freeman and a turnover on downs for Aberdeen to conclude a scoreless first quarter. The Bulldog defense didn’t surrender a first down in the quarter. Their offense moved the ball much better, but couldn’t get out of their own way with penalties.

Aberdeen finally broke through in the second quarter, capping off a near-seven minute drive with points. On 3rd-and-18, Strong scrambled towards the sideline, reversed field, and found T.J. Fields just a yard ahead of the first down marker. Strong finished the drive with a three-yard touchdown pass to Bell, giving the Bulldogs a 6-0 lead going into the locker room.

Water Valley finally recorded a first down in response, but a fumble ended those plans.

Coming out of halftime, the Blue Devils still couldn’t get anything going offensively, despite good field position from an early second half turnover. After the Bulldogs failed to capitalize on a muffed punt, Jaden Morgan finally allowed Water Valley to break through. Morgan took a screen pass from C.J. Telford 74 yards inside the Aberdeen five-yard line and scored the very next play. Following a successful PAT, Water Valley had their first lead of the night, 7-6 with 3:39 left in the third quarter.

The Blue Devils looked to add to that lead after forcing a three-and-out and having an impressive drive. The Bulldogs held firm and forced a turnover on downs, however, they made the stop on their own one-yard line. That allowed Water Valley to get an additional two points as a bad snap forced Strong to fall on the ball in the end zone. The Blue Devils looked to put the game away up 9-6 with 6:30 left to play.

Aberdeen got the stop they needed, and then some. The Bulldogs got into the backfield on third down, stripped the ball from Telford and returned it to the Water Valley five-yard line. Strong found Bell all alone for his second touchdown catch of the night, but another failed two-point conversion made it a three-point lead, 12-9, with 4:38 left to go.

A decent kickoff return and sideline completions gave Water Valley’s Jon Surrette a chance to send the game to overtime with just over a minute left. The kick barely sailed wide right, and the Bulldogs held on to keep their season alive.

“They’ve been a tough team,” Williams said. “They play hard for us. We’ve been down before, so we learned how to fight back from adversity. I thought we did a good job with that tonight.”

The Bulldogs will be back at home Friday, November 12 to host North Panola in the second round of the MHSAA Class 3A playoffs. Kickoff is set for 7 p.m.