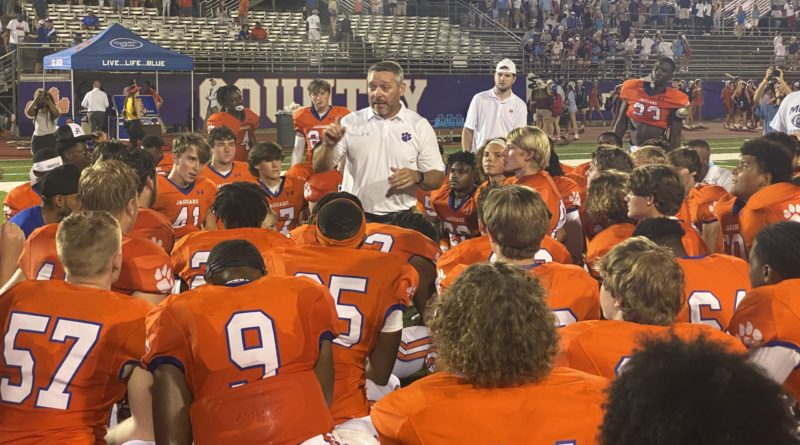 MADISON — Madison Central knew coming into Thursday night’s showdown with Oxford it needed to win to host a playoff game next week.

After beating the brakes off the visiting Chargers, they’ll get one.

Behind a stellar rushing attack, the Jaguars raced past Oxford 48-7 in a key Region 2-6A contest to close out the regular season.

With the win, Madison Central (9-1) clinched the No. 2 seed out of Region 2 and will host DeSoto Central next Friday night in the first round of the MHSAA Class 6A playoffs.

“I thought we played well in all three phases tonight and I think we’re clicking at the right time,” said Madison Central coach Toby Collums. “Our kids knew what was at stake and they want to be at home in the first round and now we’re at that point.”

There were a combined three turnovers on the first three possession of the games by both teams (all fumbles) and Oxford turned it over twice.

Madison Central capitalized on the second turnover, as Robert Dumas scored on a 9-yard touchdown run with 4:35 left in the first quarter to give the Jaguars a 7-0 lead.

On Madison’s next possession, Vic Sutton connected with Isaiah Spencer on a 32-yard touchdown pass with four seconds left in the first quarter to extend their lead to 14-0.

Dumas scored on a 1-yard dive with 5:18 left in the second quarter to give Madison Central a 21-0 lead.

Sutton extended the lead to 27-0 with 22 seconds left before halftime on a 4-yard run.

Deandre Pullen scampered 23 yards to the end zone on the first play of the second half to give Madison Central a 34-0 lead.

Dumas added two more rushing touchdowns, including a 43-yard romp, and finished the game with 135 yards on 19 carries with four total touchdowns to lead the Jaguars.

“Couldn’t do it without the offensive line and they dominated tonight,” Dumas said. “We preached all week that we wanted to host a playoff game and now we got it.”

Madison Central finished the game with 470 yards rushing and 596 yards of total offense.

“It starts up front with the offensive line, and they’ve progressed every single week this year and they love what they do,” Collums said. “Now it’s a one-game season and we’re playing really well, and we need to keep the momentum going.”

Oxford’s only score came on a 43-yard touchdown pass from Trip Maxwell to Dane Harmon with 6:35 left in the third quarter. The Chargers only managed 157 yards of total offense.

“A lot of credit goes to Madison Central, they are a great team and we put ourselves behind the 8-ball early with those turnovers offensively,” said Oxford coach Chris Cutcliffe. “We got to just put this one behind us quickly and get ready for the playoffs.”