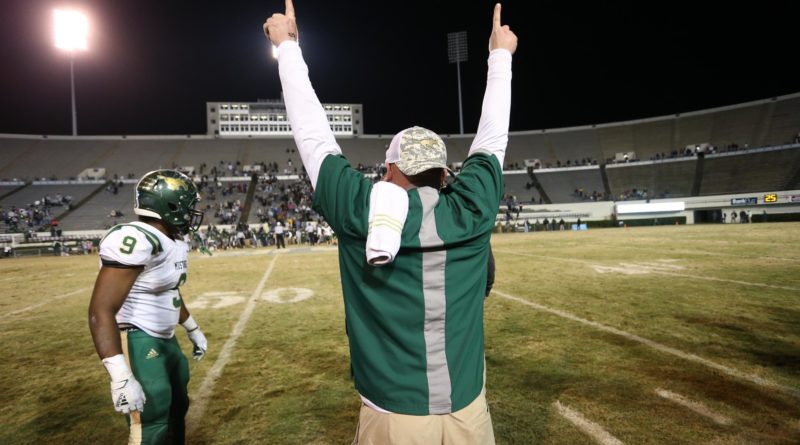 LAUREL – It wasn’t anything like business as usual for the West Jones football team Friday night.

The Mustangs had to refocus and play a game against their neighborhood rivals, the Laurel Golden Tornadoes, two days after losing a teammate and friend in an automobile accident.

But the Mustangs were able to put their grief aside and handle the business at hand, holding off Laurel 24-21 in a key battle in Region 3-5A at Mustang Stadium.

West Jones, ranked No. 7 in the statewide Overall polls and second in Class 5A, improved to 7-1 overall and, more importantly, 5-0 in region. The Golden Tornadoes dropped to 4-4 and 3-2 but are still very much in the playoff hunt.

“This is the hardest thing I’ve ever been through,” said longtime Mustangs coach Scott Pierson. “There’s no road maps for it, nothing that can prepare you for that.

“We’ve got so many kids who are hurting. We have a family that’s hurting. You want to fix it, as a coach, and you can’t fix it. I don’t want anyone feeling sorry for us, but we lost a brother, and a mom and dad lost a son. It’s not a football game; it’s real.”

Memorials to Thompson were everywhere on both sides, and the rivalry lacked the heated passion the intra-county clash normally has. Both teams wore stickers with Thompson’s No. 56 and his number was painted on the center of the field.

“Nobody should ever have to go through what they’re going through right now,” said Laurel coach Ryan Earnest. “Our hearts and prayers are with hem tonight. They played inspired.”

Still, life goes on and there was a game to be played.

Laurel took the opening kickoff and announced its intentions on the first play from scrimmage, a 22-yard bolt around right tackle by senior Kiron Benjamin.

“We wanted to control the line of scrimmage,” Earnest said. “We felt like we had an advantage there, and we did. We were able to run the football with some success. Unfortunately, we had some turnovers that put our defense in a bad spot a few times.”

Indeed, the Tornadoes drove to a first-and-goal at the Mustang 5-yard-line, getting a big 29-yard catch-and-run by Benjamin on a swing pass around right end.

But Laurel was hit with a holding penalty, then a miscommunication saw quarterback Javonta Caldwell making a pitch on an option play to a trailing back that wasn’t there, and Jamarion Keyes recovered the fumble for West Jones at the Mustang 28.

However, the Mustangs gave it right back on a fumble and this time Laurel cashed it in, with Benjamin getting most of the yardage, including the touchdown on a 4-yard run on fourth-and-goal.

“Laurel had a great game plan,” Pierson said. “I the first half, I don’t think we stopped them; they turned it over a couple of times, gave us a short field. Second half, it was just a case of us holding on.”

The Mustangs turned the game around in the second quarter with touchdowns on three consecutive possessions.

West Jones won a battle of field position and took over after a short punt at the Laurel 37. On the second play of the drive, senior Joshua McDonald burst over left guard and motored untouched 35 yards for a touchdown.

“They took care of us,” said senior Antoine Gavin said of the push by the Mustangs’ offensive line. “We had to support our brother Cade and did what we had to do. They did it all for us tonight.”

Laurel took the ensuing kickoff and drove into Mustang territory when junior Matthew Nixon picked off a pass and rambled 41 yards to the Laurel 38.

Three plays was all it took for West Jones to score the go-ahead touchdown. Junior quarterback Marion Lindsey found Zyquawn Williams on a slant pattern over the middle for 24 yards, then Lindsey took a keeper around left tackle for a 9-yard touchdown run.

The Mustang defense stepped up again on Laurel’s next possession, recovering a fumble near midfield.

“First half, we came out kind of slow, but we picked it up in the second half,” said Nixon. “I just played my deep technique (on the interception) and he threw it right to me.”

Starting again on Laurel’s side of the field, the Mustangs beat the clock for a six-play, 47-yard scoring drive, Gavin got it in the end zone from 3 yards out on a direct snap from center with 17 seconds left in the first half and a 21-7 halftime lead.

Williams gave West Jones good field position to start the third quarter, taking the second-half kickoff 47 yards to the Laurel 29, but the Tornadoes stiffened, holding the Mustangs to a 40-yard field goal.

“Obviously, in the second half, we didn’t play very well,” Pierson said. “I think the emotions caught up to us and we just ran out of gas.

As it has done so many times, West Jones leaned on its defense and that defense held up for a while.

The Mustangs got a fourth down stop after a long Laurel drive to the West Jones 14, but the Golden Tornadoes gained momentum on defense, helped by a pair of holding calls against the Mustangs.

Taking over at their own 49, the Tornadoes needed just three pass plays from Caldwell to senior Tyrone Jones of 22 yards, 9 yards and 20 yards for the touchdown with 6:18 remaining in the game.

“We had to throw it a bit more than we wanted to,” said Earnest. “But, overall, our kids did a good job of executing the game plan, minus the turnovers.”

Another three-and-out and a short punt, and the Tornadoes were back in business at the West Jones 28, and six plays later, Benjamin cracked the end zone from a yard out to close the margin to three points.

At that point, with 2:56 to play and momentum all on Laurel’s side, Pierson turned to the heavy package he had used to score the Mustangs’ third touchdown, with Gavin in the key role, and the senior answered the call.

Gavin picked up 12 yards off right tackle, then an 8-yard run, and, finally, the coup de grace, a sweep around right end for 46 yards to the Laurel 16 for a clinching first down.

“Coach told me we needed a first down, so that’s what I gave him,” said Gavin. “It felt good to beat Laurel again.”

Benjamin finished with 115 yards on 21 carries for Laurel. Caldwell finished 12 of 24 for 183 yards, seven of his passes going to Jones for 105 yards.

“We played a great team tonight; we just ran out of time,” Earnest said. “I’m proud of the way our kids played. This is one of the toughest places in the state to play, and they had a lot to play for tonight. And we answered the call.”

McDonald ran for 88 yards on 20 runs and Gavin had 68 yards on just six carries for West Jones.

“These kids have been doing this for three years now,” said Pierson. “I think we’ve lost, maybe three or four ball games in the last three years. They’ve shown the ability to rise to the occasion each time. They have the ability to tune everything out and play.”

It doesn’t get any easier for either team as the regular season nears its climax. Both of West Jones’ last two games are on the road, next week at Hattiesburg, then to Wayne County.

Laurel, on the other hand, finishes the season with two home games — against Wayne County next week before hosting the 100th Battle for the Little Brown Jug against Hattiesburg on November 6.