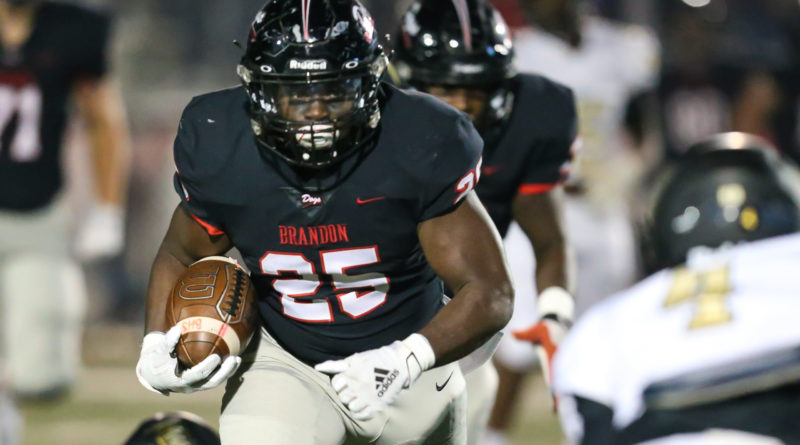 BRANDON — For the first time in three years, it appears the road to the 6A State Championship won’t go through Oak Grove — not after Nate Blount and the Brandon offense ran past, through and over the Warriors in a 24-17 win at Bulldog Stadium.

The Bulldogs (6-2, 5-0 in Region 3) handed the Warriors their first loss against an MHSAA school since the 2019 state championship, and it was no fluke.

Blount was the hero. He carried the ball 36 times for 260 yards and a touchdown, pacing an offense that struggled to pass the ball for pretty much the entire ball game.

With the starting quarterback on the sidelines, the sophomore took most of the snaps directly in the second half.

“We have done that before, mostly at practice,” Blount said. “But we’ve been working on it and you never know when it’s going to come. So when it does, you just have to step up.”

Blount did just that — and Brandon needed every inch of it.

The Bulldogs fell behind in the first quarter when Oak Grove’s Jaylen Aborom stepped in front of a Landon Varner pass and took it 45 yards the other way for a pick-six.

The Warriors held that 7-0 lead until the third play of second quarter, when Brandon’s Jarvis Durr got the corner on an outside run and raced 30 yards down the home sideline for a score to tie the game.

Two possessions later, the Warriors (6-2, 4-1 in Region 3) put together a 97-yard touchdown drive to regain the lead. Quarterback Kabe Barnett hooked up with Aborom for a 44-yard pass-and-catch to get the Warriors to midfield, and JQ Gray capped the drive 10 plays later with a three-yard touchdown run.

Brandon tried to respond before the halftime break, but the last eight first-half plays the Bulldogs ran were all passes — seven incompletions and one catch for no gain.

“The plan was to go to (Durr and Blount) all night and I kind of got away from that in the first half,” Brandon coach Sam Williams said. “…but I’m really proud of those guys and the way they played. We had a bad feeling, going into the half down 14-7, but we came out and fought through some adversity and really played well in the second half.”

If Williams — who calls his own offensive plays — was reluctant to give Blount and Durr the ball in the first half, he was almost giddy about it in the second.

The Bulldogs got the ball first coming out of the break and gave it to Blount twice — an 11-yard run and a 45-yard touchdown that pulled the Bulldogs back even at 14-14.

Aborom made another big play for Oak Grove to force a punt on Brandon’s next possession, but the Bulldogs ended up with great field position after Brandon senior Chris Brooks picked off Barnett near midfield on the ensuing possession.

Blount carried the ball on five-straight plays after the interception and moved the Bulldogs down inside the Oak Grove 30-yard line.

A roughing the passer call on 4th-&-14 extended the drive from there, and Jalen Ballard eventually cashed in a 35-yard field goal to put the Bulldogs on top for the first time, 17-14, with just under four minutes to go in the third quarter.

The Warriors got the ball back with 38 seconds left in the third quarter and drove 63 yards to set up a 24-yard field goal off the foot of Byron Easterling to tie it at 17-17 with nine minutes left in the game.

But by that time, the Warrior defense was absolutely gassed. Williams handed the ball to Blount on the first three plays of the ensuing Brandon possessions for gains of 23, six and two — before Durr hit the seam for a 47-yard touchdown that gave the Bulldogs the 24-17 advantage.

Oak Grove possessed the ball twice more, but Brandon got a turnover on downs on the first and an interception from Manuchim Didia on the second.

The Warriors could have squeezed in one final possession, but they couldn’t stop Blount. The sophomore ran the ball on all four plays of Brandon’s final possession and converted two first downs to seal the win.

Blount and Durr combined for 338 rushing yards on a night when the Bulldogs completed just three of 22 passes for 39 yards. Barnett led Oak Grove offensively, completing 21 of 38 passes for 210 yards, but with two costly second-half interceptions.

The win sets up the Bulldogs with an inside track to the top seed coming out of Region 3. The Bulldogs still have two big games remaining — at Northwest Rankin next week and at home against arch-rival Pearl on Nov. 4, but they’ll be favored in both games and now hold the tie-breaker over the Warriors should they stumble in either contest.

The Warriors also have two games remaining, and against the same two opponents as Brandon. They’ll face Pearl on the road next week and host Northwest Rankin in the season finale.

Oak Grove coach Drew Causey said sometimes, you just have to tip your cap to the other team.

“They played really well and we turned it over twice in the second half,” Causey said. “We didn’t play well up front on the o-line, and you gotta give them credit. They have a heckuva football team. I said it earlier this week: they are probably the most overlooked team in the state right now.”