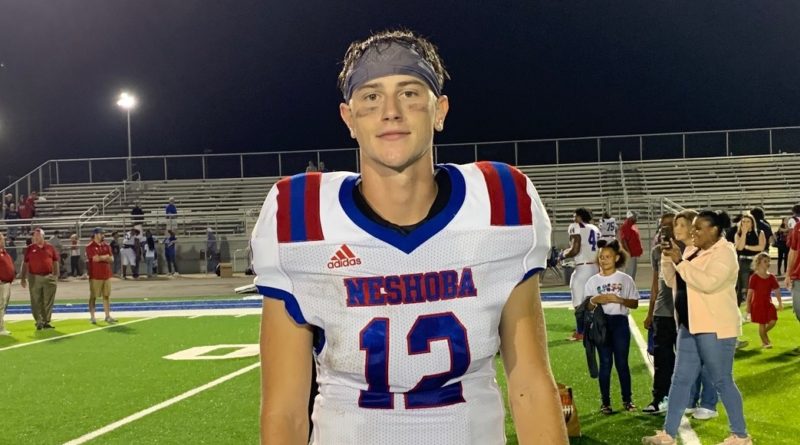 RIDGELAND — Eli Anderson has had a frequent reminder of how last season ended.

Well, he got pay back on Friday night.

Anderson tossed five touchdowns as the Rockets held on to beat Ridgeland 42-35 in a shootout at Titan Stadium on Friday night in a battle of unbeaten teams in Region 2-5A.

“Great game like it’s always between these two teams and it’s very possible we will see them again in the playoffs,” said Neshoba Central Patrick Schoolar. “These type of games are tough to win and it’s good to see our kids fight and win a game like this.”

It was a typical Ridgeland and Neshoba Central game. Back and forth.

Neshoba Central jumped out to a 14-0 lead on two touchdown passes from Anderson. The first one went to Dez McWilliams from 70 yards out with just under seven minutes left in the first quarter.

The second one went to Elijah Ruffin from 25 yards out on a tipped ball to extend the lead to 14-0 with 3:28 left in the first quarter.

Ridgeland cut the lead to 14-7 on a 2-yard touchdown pass from Thomas Dyess to Ja’Braxton Boone with 8:50 left in the second quarter.

The Titans tied the game at 14 as Dyess connected with Ayden Williams on a 25-yard touchdown pass with 4:17 left before halftime.

The Rockets retook the lead on a 7-yard touchdown pass from Anderson to Bryceton Spencer.

After Ridgeland fumbled Anderson connected with Ja’Naylon Dupree on a 5-yard touchdown pass to extend the Rocket lead to 28-14 with 6:35 left in the third quarter.

Anderson and Spencer connected again on a 72-yard touchdown pass to extend the Neshoba lead 35-14 with 3:30 left in the third quarter.

“We started off slow and in the second half we came out and performed a lot better,” Anderson said. “They were blitzing every down in the first half, and we got weapons on the outside and they can go get it. Feels good to get this one I have the score from last year on my phone and we posted it all over the locker room, so it feels good to get a little revenge. Puts us in a good spot of where we want to be moving forward.”

Kamari Payne had a 3-yard touchdown run for Ridgeland to cut the Neshoba lead to 35-21 with 3:06 left in the third quarter.

The Rockets extended the lead to 42-21 on a 30-yard touchdown run from Dupree on the first play of the fourth quarter.

Williams had a 62-yard touchdown run for the Titans to cut the Neshoba lead to 42-28 with 10:57 left in the fourth quarter.

After an interception, Williams had a 60-yard touchdown catch from Jarvis Woody to cut the lead to 42-35 with 3:02 left in the fourth quarter.

The Rockets recovered ensuing onside kick and a got an offsides penalty on fourth down to seal the win.

“We were able to run the ball in the second half to keep them honest and Eli made some good throws and made plays with his feet,” Schoolar said. “We got some weapons on the outside for the first time in forever and did a good job utilize them. We got to keep battling and getting better to get where we want to be.”

Williams had 184 yards receiving with two touchdowns and a rushing touchdown to lead Ridgeland (4-2, 3-1).

Thomas Dyess had 204 yards passing for the Titans.

“Just proud of the guys for fighting to the end,” said Ridgeland coach Teddy Dyess. “Came down to the end and they made more plays than us.”