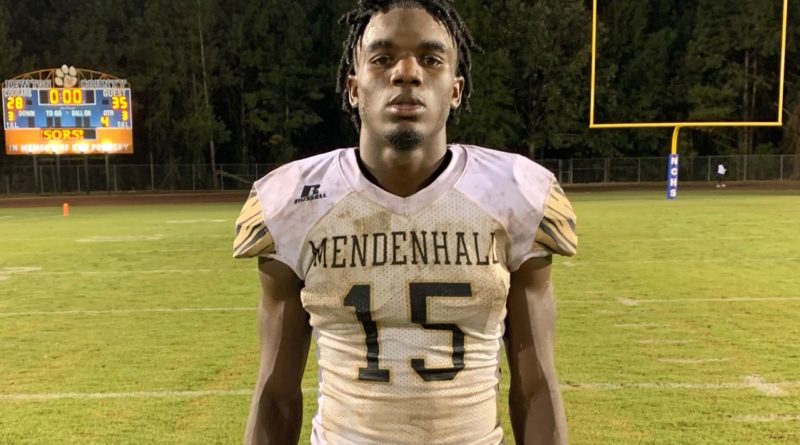 Jenkins had four total touchdowns and a interception to help lead the Tigers hold off a late Newton County rally and won 35-28 in a key Region 5-4A game Thursday night.

“It was good win for us with it being first district game and on the road,” said Mendenhall coach Chucky Allen. “Lost one of our best receivers early in the game, and our kids rallied around that and fought to the end.”

The first half was back and forth.

The Tigers couldn’t have asked for a better start as they scored on their first play from scrimmage. Chris Davis took a reverse handoff and scampered 75 yards to the end zone to give Mendenhall a 6-0 lead with 10:21 left in the first quarter.

Newton County answered with a 17-yard touchdown pass from Grey Hale to Tywin Henderson to give the Cougars a 7-6 lead with 8:19 remaining in the first quarter.

Jenkins gave Mendenhall the lead again at 13-7 on a 2-yard touchdown run with 4:06 left in the first quarter.

Hale and Henderson connected again on a 43-yard touchdown pass to give the Cougars a 14-13 lead with 1:26 left in the first quarter.

Jenkins connected with Walter Owens on a 8-yard touchdown pass to help Mendenhall regain the lead at 19-14 with 8:59 left in the second quarter.

Colin Crowder returned the ensuing kickoff 91 yards for a touchdown to and Newton County went ahead 21-19 with 8:45 left in the first half.

On Mendenhall’s next drive, Owens suffered a broken leg and the game was delayed about 15 minutes due to the injury.

After the injury delay, Jenkins hit Darius Dampier on a 7-yard touchdown pass and the successful two-point conversion gave the Tigers a 27-21 lead.

In the third quarter and right after Jenkins intercepted a pass, he connected with Nicholas Williams on a 37-yard touchdown pass to extend the Mendenhall lead to 35-21 with 6:49 left.

With just over seven minutes to go in the fourth quarter, Newton County cut the Tiger lead to 35-28 on a Hale 1-yard touchdown run.

The Cougars stopped the Tigers on fourth down at the Newton County 23-yard line with 1:09 left and drove down to the Mendenhall 30-yard line with one second but the Hail Mary pass fell incomplete.

“Story for us all season is defense started out slow and second half tightened up,” Allen said. “We’ve got to find a way to play a complete ball game. D.K. is a playmaker and he made a lot of right decisions and now we’re 1-0 in district.”

“It was a hard fought team win for us tonight. We had a teammate go down and we had to fight,” Jenkins said. “They left running lanes open and I just took off and took what the defense gave me.”

Hale had 167 yards passing with two touchdowns and a rushing touchdown to lead Newton County (2-5, 1-1).

“I wasn’t a very coach in the first half and the second half we made adjustments and the kids fought hard,” said Newton County coach Bobby Bass. “We will bounce back and get ready for next week.”