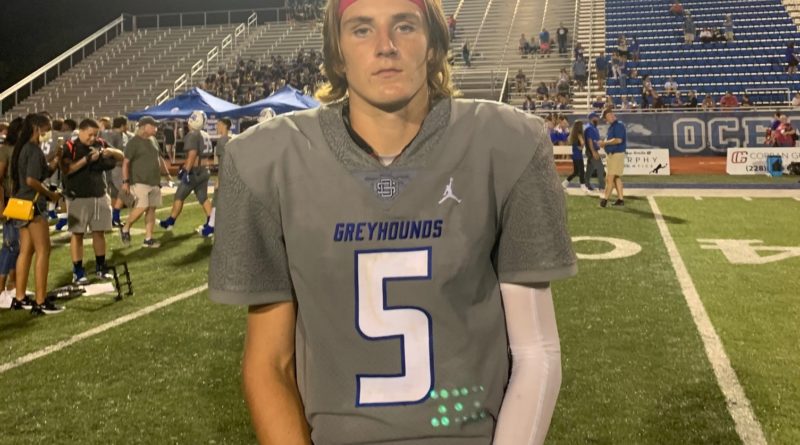 D’IBERVILLE — Ocean Springs’ defense stymied D’Iberville’s offense in the first half as the Greyhounds opened up a large lead at the half before cruising to a 42-14 in a key Region 4-6A matchup Friday night.

The Warriors couldn’t get anything going early, gaining just two first downs —none on a penalty — and fumbling the ball to Ocean Springs twice, and gained just 29 yards in total offense over the first two quarters against 40 yards in penalties.

“We just made too many mistakes,” said D’Iberville Larry Dolan, who noted the Warriors had a number of problems with the center-quarterback exchange and penalties. “We shot ourselves in the foot so many times, we couldn’t get anything going.”

Ocean Springs safety Avery Smith said the defensive effort in the half led to the win. “We pitched a shutout in the first half,” he said, noting the Greyhounds’ offense took advantage of the Warriors’ issues moving the ball by opening up 28-0 lead at the half.

Ocean Springs’ first drive almost ended in disaster, as David Humphries fumbled the ball and, by the time he had picked the football up and disappeared further behind the line of scrimmage, he had lost 29 yards on the play. But, Humphries and Ocean Springs (5-0, 2-0), ranked third in Mississippi by Scorebook Live, quickly recovered.

Humphries scored on runs of nine and six yards as Ocean Springs used a number of long power-drives to take control of the game in the first half. Bray Hubbard, playing the game despite a severe cut on his throwing thumb, hit J.P. Coulter on a beautiful 30-yard scoring pass that dropped in the arms of the receiver four yards in the endzone, and ran for an 8 -yard score that gave Ocean Springs a 28-0 lead at the half.

“The three-and-outs by the defense helped us get the game going,” said Ocean Springs coach Blake Pennock.

With Hubbard limited by the deep cut on his thumb and the Warriors’ solid pass defense, the Greyhounds did most of their damage on the ground. “We feel great about our running game,” he said, adding the quick tempo ran by Ocean Springs helped the Greyhounds run over people. “The tempo sets in and wears a lot of people out.”

D’Iberville (5-1, 1-1) did manage to come out of the break and find some offensive success behind running back Drey Lenior and quarterback Lance Garlotte. On the Warriors’ initial possession of the second half, Lenior found a few acres of open ground and sprinted 55 yards to the Greyhound two-yard line. Four plays later, Lenior went in for his first score of the night.

After Ocean Springs responded with a 19-yard Hubbard run to make the score 35-7, the Warriors tried once more to get back into the game. Garlotte hit tightend Colton DeShazo for passes of 12 yards and 11 yards, with the first pass coming with a personal foul hit to the head, to get the ball inside the Greyhound five-yard line.

Again it would take the Warriors four plays to push the ball in, with Lenior doing the tough work and popping in from the one to cut the Ocean Springs lead to 35-14 with 12 seconds left in the third quarter.

Dolan said he thought the Warriors still had an outside shot of pulling the game out. “If we could have gotten the onside kick and another possession from them,” he said. But, the comeback was cut short by Ocean Springs.

Taking over on a short field following the Warriors failed onside kick, Humphries had two runs for 10 yards each and then hit Evan McNally on an 18-yard pitch and catch to get the ball to the Warriors three-yard line. Two plays later, Humphries dove in from two yards out for his third touchdown on the night with just over nine minutes left to play.

Three minutes later, Khris Bonds ended any thoughts of a Warriors’ comeback, picking off Garlotte at the Greyhound 30 with 6:17 left. D’Iberville never got the ball back.

“I’m proud of my players,” Dolan said. “We made some big plays in the second half, but we couldn’t get back into the game.”

Despite losing 29 yards on one play, Humphries recovered to gain 122 yards and three scores on the night. Hubbard, playing with a numb thumb on his right hand, still completed 12-of-16 passes for 128 yards and a touchdown to Coulter. He also ran 11 times for 58 yards and two scores. Coulter finished with five catches for 68 yards. Will Gray had nine stops and Brady St. Amant eight stops to lead Ocean Springs defense.

Lenior led D’Iberville with 81 yards and two scores on 15 carries.