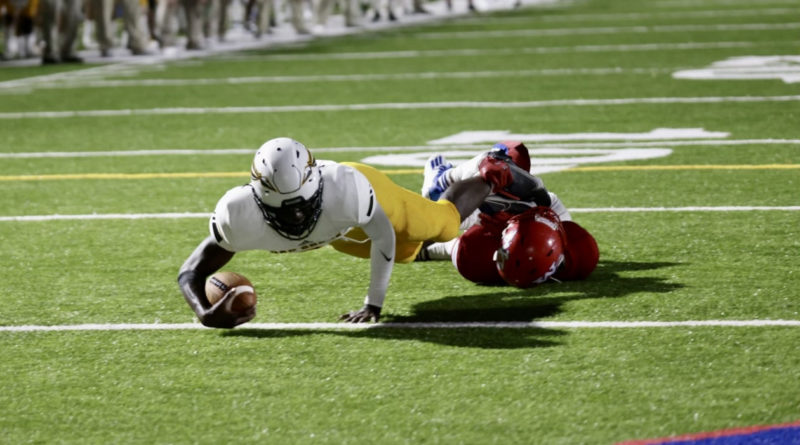 VICKSBURG — The big question headed into Friday night was how No. 3 Oak Grove would respond on the road after its first loss in 16 games.

Behind a stellar performance from quarterback Kabe Barnett and a solid defensive showing, the Warriors raced past Warren Central 37-20 in the Region 3-6A opener for both teams at Robert Morgan Field on Friday night.

“I thought we played really well for the most part. We were able to find some rhythm and got going on offense there in the third quarter,” said Oak Grove coach Drew Causey. “Warren Central is a heckuva football team. They’re big, physical and they made us earn every inch tonight.”

The Warriors scored on the opening drive of the game on a Dontavious Howard 1-yard touchdown run with 4:26 left in the first quarter to take a 6-0 lead.

Oak Grove extended the lead to 9-0 with 4:49 left in the second quarter on a Byron Easterling 23-yard field goal.

With 13 seconds left before halftime, Barnett connected with Tyrell Pollard on a 38-yard touchdown pass to extend the Oak Grove lead to 16-0.

Warren Central got on the board on a Mark Gray 4-yard run with 3:36 left in the third quarter to cut the Oak Grove lead to 16-6.

The Warriors responded as Howard scampered into the end zone from 18 yards out to extend the lead to 23-6 with 1:49 left in the third quarter.

After a bad punt by Warren Central, Oak Grove’s A.J. Maddox scored on a 2-yard run to extend the lead to 30-6 with 9:54 left in the fourth quarter.

“We got some momentum in the third quarter and was able to keep it. Focused all week was to be 1-0 to start district and that’s huge,” Causey said. “Kabe did a great job tonight and just took what they gave us and played like we expect him to play each week.”

“Felt great tonight. The receivers we have just know what to do when they get the ball in their hands,” Barnett said. “After the loss last week, we knew we had to get back right and bounce back and we did.”

Jack Wright had 176 yards passing with a touchdown to lead Warren Central. Tre Hall had a receiving and a rushing touchdown for the Vikings.

“We knew coming in those guys were dangerous on offense and defensively we didn’t get enough stops in the first half. Our offense was hardly ever on the field in the first half,” said Warren Central coach Josh Morgan. “They’re a very good football team and in the district we’re in you have to make plays and we didn’t tonight.”