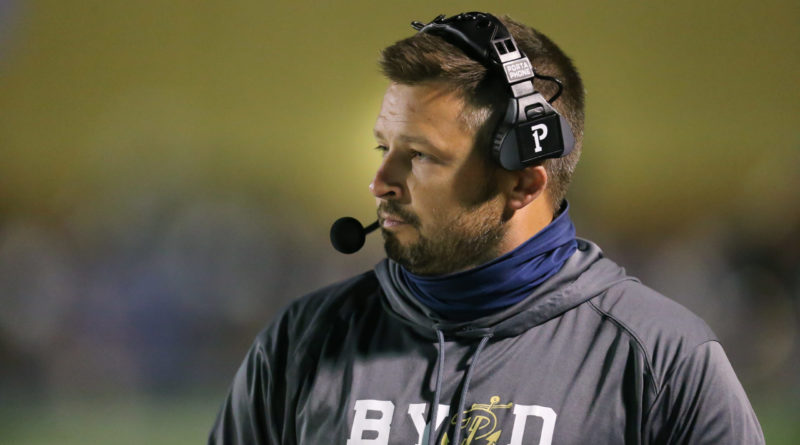 PEARL — Don’t look now, but the Fighting Pirates from Pearl may be for real.

Like that 2017 team, which went on to go 16-0 and win a 6A state title, this 2021 Pearl team is beating people to sleep. After Friday night’s win, these Pirates have outscored their opponents by a combined score of 127-34.

“I thought we came out and played well against a good Biloxi team tonight,” Hunter said. “This place was rocking tonight. Ray Rogers Stadium is always a great place to play, and our fans and students and everyone really came out to support us. We just seem to play really well here lately.”

That good play at home was on display early and often Friday night, as quarterback Jerry Johnson led touchdown drives on each of Pearl’s first five possessions.

Biloxi (1-2) answered with a 67-yard scoring drive, highlighted by Deljay Bailey’s 35-yard touchdown pass to Duran Parrish to cut the lead to 14-7 with 3:36 left in the opening quarter.

But the onslaught kept coming.

Pearl went 72 yards on the ensuing possession, with Johnson finding senior receiver Cody Armes in the back of the end zone for a 32-yard touchdown drive to stretch the lead to 21-7.

Biloxi drove it to midfield before punting it away to the Pearl 11-yard line, but all that did was set up an 89-yard touchdown drive capped by Johnson’s 63-yard touchdown pass to Jaquavian Shoto.

It was the first of several big plays for Shoto, who plays both ways at 5-foot-5 and 165 pounds. He capped the Pirates’ final touchdown drive of the first half with a 33-yard touchdown run and made a huge stop to get a turnover on downs later in the game.

“We’re playing confident right now,” Shoto said. “But we can’t get the big head though. We just have to be consistent and keep our heads on straight… For me personally, I just have to take advantage when I get the opportunities. I’m being overlooked because of my size, but as ya’ll can see, the size doesn’t matter on the field if you play with heart.”

The second half was a wash. Pearl came away empty on its first two drives, but senior D.J. Hudson came up with an interception deep in Pirate territory and returned it 96 yards for the touchdown to give Pearl the commanding 40-7 lead.

After a Biloxi fumble on the ensuing possession, Johnson cashed in a 19-yard touchdown run to put the game away with a little more than nine minutes left in the fourth quarter. No Pearl starter saw the field again after that.

That first-half touchdown was the Indians’ lone score against Pearl’s first-string defense. The Pirates ran the ball 28 times in the first half for 301 yards.

“Obviously we want to run it first,” Hunter said. “We’ve got two really good backs back there in the backfield and I thought (Jerry) really threw the ball well tonight. When he can do that and our receivers can make some plays, we’re pretty tough to beat.”

The Indians scored a couple of late touchdowns after the game was already out of hand, but looked good doing it.

Senior Terrance Simmons gave Biloxi a spark with a 51-yard touchdown run with 9:15 left int he fourth quarter, and junior Amarieon Pierce ran for a 20-yard touchdown with 4:17 left.

“We just didn’t put the guys in the right position to make the plays we needed to make defensively tonight,” Biloxi coach Katlan French said. “And that’s on me. We’ve got to do a better job of getting the guys prepared to play. Pearl is a great team that is very hard to stop, but we have to play better.”

The Pirates will head to Petal next week for a showdown with the Panthers in the Region 3-6A opener for both teams. Biloxi will host D’Iberville in their Region 4-6A opener.