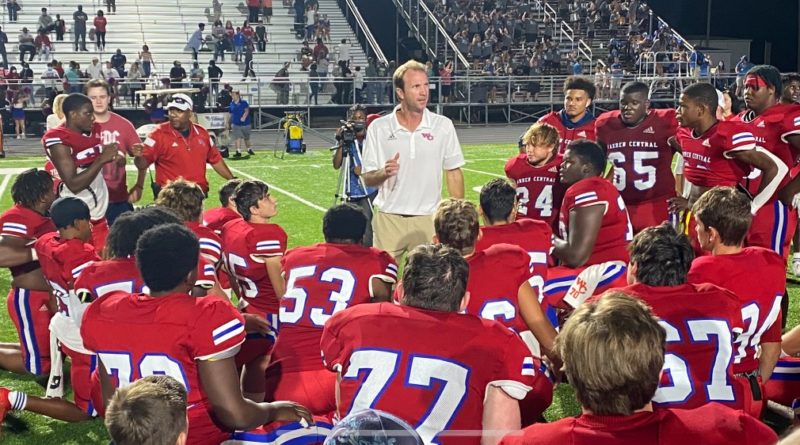 VICKSBURG — Weird things happen on the river, especially when Warren Central is involved.

That was certainly the case Friday night in the Vikings’ stunning 24-21 win over Germantown that came down to the final play — a seven-yard touchdown pass from backup quarterback Jack Wright to Treyvion Hall in the corner of the end zone.

“It’s the best thing in high school football to be on the right side of one of those,” Warren Central coach Josh Morgan said. “Right here in the corner in front of your band and the crowd goes crazy. It’s just special and I’m glad our guys got to experience that.”

The Vikings (3-0) had trailed for nearly the entire ballgame.

After a scoreless first quarter, Germantown went ahead on the third play of the second quarter, when Ed Dunigan fought his way into the end zone from 10 yards out to put the Mavericks ahead 7-0.

Germantown leaned hard on Dunigan — a senior starting in place of injured star tailback Branson Robinson — and he responded with 76 rushing yards in the first half alone.

Warren Central failed to get anything going offensively until the final drive of the half. After taking over at their own 39-yard line with 67 seconds left, the Vikings drove 48 yards to the Germantown 13-yard line before settling for a 31-yard Brandon Gillom field goal to make it 7-3 going into the half.

Germantown stretched its lead to 14-3 on the opening possession of the second half. Quarterback Jackson Hood sold the play fake and tossed a dime to receiver Tykwon Wade, who had broken free behind all the Warren County defenders, for an 84-yard touchdown.

The Vikings stalled in Maverick territory on their first third-quarter possession, but punter Brandon Gillam pinned the Germantown offense deep at their own one-yard line with a great punt. The Mavs lined up in the pistol and handed it to Dunigan, who was met by a host of Viking defenders in the backfield for a safety to cut the Germantown lead to 14-5.

Maverick lineman Tyrese Fields blocked a punt on the Vikings’ next possession, which led to a 27-yard Hayden Houpt field goal that stretched it back to 17-5.

It stayed that way until the fourth quarter, and then things got wild.

Warren Central pulled starting quarterback Hartley Sullivan and put in Wright, who had played sparingly in the Vikings’ first two games. After a quick three-and-out on his first series, Wright got things going on the second. The Vikings took advantage of good field position going 47 yards in eight plays and scoring on Wright’s first seven-yard touchdown pass to Hall to trim the Germantown lead to 17-12.

The Viking defense got a quick stop and Wright went back to work. This time, the Warren Central offense went 69 yards in eight plays — highlighted by a 36-yard pass to receiver Preston Lynch on 4th-and-8 at midfield — and scored on a 14-yard run by Mark Gray.

Wright hit Lynch in the numbers to complete the two-point conversion, and Warren Central had its first lead of the night, 20-17.

“Jack was very poised,” Morgan said. “The moment wasn’t too big for him. We needed all of it and it was great to see that from him.”

But Germantown wasn’t done yet — the Mavericks came right back with another long touchdown pass, this one a 72-yard bomb down the visiting sideline to Tony Knight Jr., giving the Mavericks a 24-20 lead with 2:58 left in the game.

A penalty on the ensuing kickoff gave Warren Central favorable field position near the 50-yard line, and the Vikings made the most of it. Wright connected with Lynch on passes of 23 and 15 yards to move the ball inside the 10-yard line, and that’s when Wright hit Hall for the winning score.

“Jack’s one of my best friends and we’ve grown up playing together,” Lynch said. “So to go out there and have that kind of finish was really special for us.”

Wright said Vikings offensive coordinator Rob Morgan had identified a hole in the Germantown defense that Lynch could exploit.

“We saw it on the video on the sidelines,” he said. “The safety was playing deep and they kept losing Preston, and we just saw it.”

And the final play?

“We drew it up on the sidelines during the timeout,” Wright said. “I saw the pressure coming, rolled out and threw it up to him. I saw it coming down in the bread-basket, turned to the crowd and let them have me.”

The win over the Mavericks might not have counted in the region standings the way it has the past two years, but it was sweet all the same for Warren Central, which can look forward to a bye week before opening Region 3 play next week.

It was just as deflating for Germantown (2-1), which was coming off back-to-back wins over Vicksburg and Lake Charles Prep in Louisiana. Interim head coach Scott Brown said he was proud of the way his guys fought, but disappointed they couldn’t pull out the win.

“We fought hard and there’s not much I can say to them,” Brown said. “That’s a good team we played tonight and we just couldn’t find a way to finish it.”

Brown said he wasn’t sure how long the team would be without Robinson, its offensive catalyst.

“He’s week to week,” he said, not elaborating on the nature of the injury. “We’re not sure how long he’ll be out, but if we have to go into battle 11 weeks with (Dunigan) in the starting lineup, I’ll do that without a second thought.”