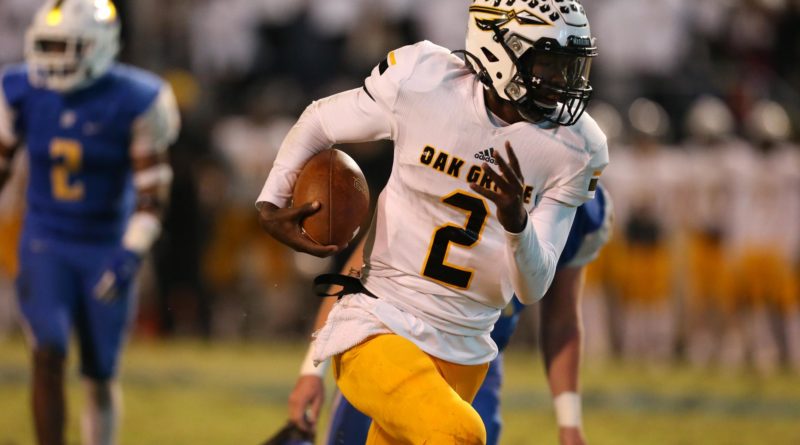 HATTIESBURG – Oak Grove waited a week to show its stuff on the football field for 2021, and the top-ranked team in Mississippi didn’t disappoint once it got a chance to take the stage.

The Warriors opened their season in style with an authoritative 43-7 victory over Seminary Friday night at Warrior Field. Oak Grove, No. 1 in both the ScoreBook Live Power 10 and Class 6A rankings, is 1-0. Seminary dropped to 1-1.

“I was proud of the way our guys played tonight, for the most part,” said Oak Grove coach Drew Causey.

“The only thing I wasn’t happy about was I didn’t think our O-line didn’t play as well as I wanted them to, and we had a couple of turnovers in the first half. So, we’ve got watch the film to get that fixed.”

It was actually competitive for about a milli-second.

Oak Grove got the ball to start the game and was forced to punt – for the only time all night – after getting one first down. The Bulldogs took over, and Ladarious Keys quickly ripped off runs of 14 and 10 yards for a pair of first downs.

Then came the deluge.

Two negative yardage plays, and an incomplete pass forced Seminary to punt, but the snap sailed over the head of punter Brandon Webb, giving Oak Grove the ball at the Bulldog 24-yard-line.

On the first play of the Warrior possession, senior quarterback Kabe Barnett hit senior Foster Mitchell in the end zone for a touchdown and a 7-0 lead.

The Bulldogs then failed to cover the ensuing kickoff, finally falling on the ball at the 2-yard-line. A quick three-and-out and a 22-yard punt return by Mitchell set Oak Grove up at the Bulldog 13 for a three-play scoring drive, with senior Dontavious Howard scoring on a 2-yard run.

“The big stage kind of got to us a little bit,” said Seminary coach Mitch Evans. “But we didn’t play very well, especially in the first half. Turnovers, missed assignments, can’t get the ball where it needs to go. It just wasn’t very good at all.”

Another Seminary punt set the Warriors up at their own 45, but Barnett needed just two passes to junior Jaylon Aborom of 11 and 44 yards to get into the end zone.

In slightly over one quarter of play, Barnett was 6 of 7 for 99 yards and two scores.

“I felt good tonight,” said Barnett. “I trusted my receivers with their route-running. All they had to do was catch it.

“We hadn’t played in a long time, so it felt good to get out there. There wasn’t any nervous feeling or any of that. I worked hard in the offseason on my speed and agility, and on my pocket presence.”

Seminary had a chance to get back in the game on the next possession, when Bulldog receiver Alex Watson got wide open on a pass play but let the pass slip through his hands.

Oak Grove got the ball back and drove 42 yards on six plays with J.Q. Gray scoring on a 4-yard run.

It was the defense that got into the action after Seminary’s Marcus Traylor intercepted a pass in the end zone to thwart a Warrior scoring drive.

On a third-and-11, the Warriors brought the house on a blitz for a sack and a fumble that was recovered in the end zone by senior linebacker Ethan Easterling.

“We rely on speed right now; that’s what we are,” said Easterling. “We’re firing of the ball every play, giving it our all. I don’t think anybody can touch us when we go full speed. That’s how we started off. We just have to keep it rolling.”

It went like that all night. Oak Grove allowed just three first down and Seminary netted minus-27 yards of offense.

“I think we really just needed to get a feel for the environment, get all the nerves out of the way,” said Easterling. “We’re still figuring it out, but it started getting smoother from the first play to the end.”

The Oak Grove special teams also got on the scoreboard after another bad snap on a Bulldog punt rolled through the end zone for a safety.

It didn’t get any better for Seminary after halftime, as the Bulldogs lost the opening kickoff of the second half on a fumble.

That set up the Warriors at the Seminary 25 for a seven-play scoring drive engineered by sophomore quarterback A.J. Maddox. Senior Cameron Sheppard scored on a 2-yard run to close the scoring for Oak Grove.

The only bright spot for Seminary immediately followed, as Keys took the kickoff 89 yards for a touchdown.

“I told the kids (at halftime) to try to win the second half and try to take something positive out of it,” Evans said. “But we made one play. One play, all night.

“We’re not going to play anybody that’s better (than Oak Grove). But we’ve got to get better ourselves or it won’t matter who we play.”

The rest of the night went quickly as the Warriors emptied their bench with a running clock. Besides Maddox, two other quarterbacks, juniors Jack Crawford and Bentley Roberts, got into the game for Oak Grove.

“A.J.’s going to be a really talented player for us, so it was good to get him a lot of work in tonight,” said Causey. “I’m looking forward to how he progresses.

“Jack’s been with us a couple of years now, and he knows the offense. He did a good job when he got in there, and Bentley, this is his first year playing football. I was glad to see him get out there and learn.”

Despite the lop-sided nature of the game, Causey was just glad to finally play a real game. Oak Grove was originally scheduled to host Wayne County this week, but the War Eagles had to cancel because of Covid-19 protocols.

“Seminary’s got a heck of a team,” said Causey. “I’m thankful for Mitch in bringing his program over here to play, because if not, we wouldn’t have had a ball game.”

Oak Grove will travel across town next week to battle Hattiesburg, while Seminary will also be on the road to face Sumrall.