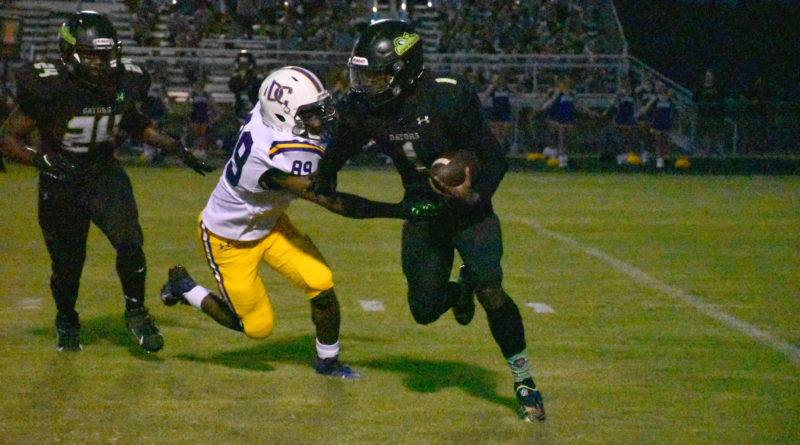 The Gators knocked off the DeSoto Central Jaguars 32-15 in non region play, but Nester was quick to point out what they could have done had it not been for a few coverage busts and mental mistakes by his team, particularly on defense.

“It shows we have talent, but a lot of youth,” Nester said. “We lost eight starters off our defense from a year ago. We still have guys figuring things out and understanding what we’re trying to accomplish. We played hard, there’s just a lot to clean up.”

The Jaguars had a rough night containing Lake Cormorant signal caller Telvin Amos, who accounted for four touchdowns — three on the ground and one through the air. Amos put up a similar performance a week ago in a win over Lewisburg, accounting for around 300 yards of total offense.

“(Amos) a guy that looks like a three-year starter,” Nester said. “That’s who he is. He’s a guy that will do whatever it takes to make it. He wants to make his team win.”

It didn’t take long for Amos to have his name called. After Lake Cormorant forced a three-and-out on DeSoto Central’s first possession, Amos took a quarterback keeper right up the gut and raced 55 yards to the end zone, drawing the game’s first blood. The Gators had a 7-0 lead just under two minutes into the contest.

Marquis Fields and Lonnie Johnson proceeded to lead the Jaguars down the field via the ground game. However, Jaden Norwood threw a red zone interception under pressure to Lake Cormorant’s Blade Privett. With 11:14 left in the second quarter, Amos called his own number again with a six-yard score. Following a failed PAT, the Gators had a 13-0 lead.

Norwood faced more pressure on the following drive, but this time, he delivered, throwing a deep ball off his back foot and finding an open receiver for a 48 yard scoring strike, allowing DeSoto Central to get on the board for the first time with 10:01 left in the half. The Gators answered following a series of punts as Jeremy Henderson found an open hole and ran for a 39 yard score with 10:01 left in the first half.

The Gators followed that up with a series of sloppy offensive drives while the defense bended without breaking. DeSoto Central turned the ball over on downs twice despite moving the ball effectively to conclude the first half. The Gators led 19-7 at the break.

DeSoto Central returned the favor coming out of the locker room, stopping Lake Cormorant twice in the red zone with an interception by Damien Jordan and with a turnover on downs. But the Jaguars couldn’t take advantage offensively and Amos eventually broke through with his third rushing touchdown of the night, making the score 26-7 with 3:47 left in the third quarter.

Early in the fourth quarter, Amos threw his first touchdown pass to Tre Walker from 22 yards out and put the Gators in cruise control.