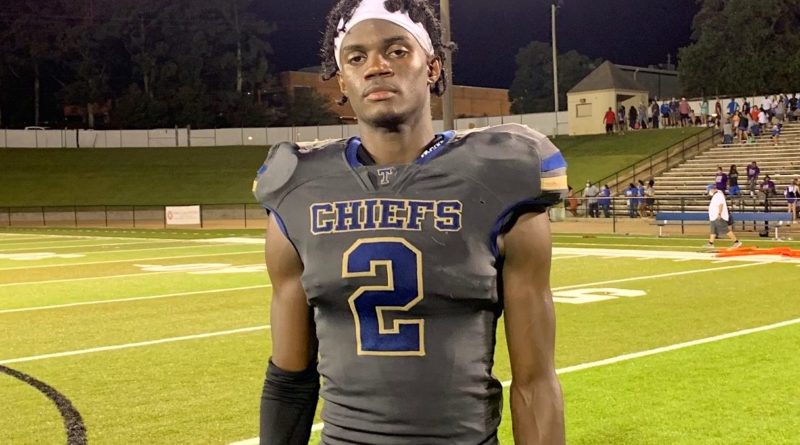 WESSON — They say it’s not how you start, it’s how you finish.

That’s what Tylertown did.

“The kids believed in themselves and I told the kids at halftime we were going take play by play and fight to the end and that’s what happened,” said Tylertown coach Osborne Holmes. “Dillon showed why he’s Division I caliber athlete and he played hard tonight.”

With Tylertown down 30-6 Ole Miss commit Jeremiah Dillon had a 24-yard touchdown catch to cut the Wesson lead to 30-14 with a minute left in the third quarter.

After forcing Wesson to punt, Dillon would caught fielded the punt and raced 55 yards to end zone, and another successful two-point conversion tied the game 30-30 with 2:54 left in the game.

With 21 seconds left Jefferson connected with Dillon again on a 9-yard touchdown pass to give the Chiefs a 38-30 lead.

Kyron Cowart’s 49-yard interception return for a touchdown with 6 seconds left sealed the 46-30 win for Tylertown (1-0).

“I can’t say enough about how proud I am of the kids for just keeping on playing and not giving up,” Holmes said. “Great to be 1-0 and now we have to get ready for West Marion.”

“I wasn’t thinking about returning at first but once I saw the opportunity I took it and had great blocking. We have a motto “As one” and we came together as one and everything came together,” Dillon said. “Coach told us at halftime it ain’t over until the horn blows in the fourth quarter and we fought to the end and got the win.”

Will Loy had 117 yards passing with two touchdowns to lead Wesson (0-1).

Omari Johnson and Zevante Stapleton had back to back interception returns for touchdowns to give the Cobras a 22-0 lead in the first quarter.