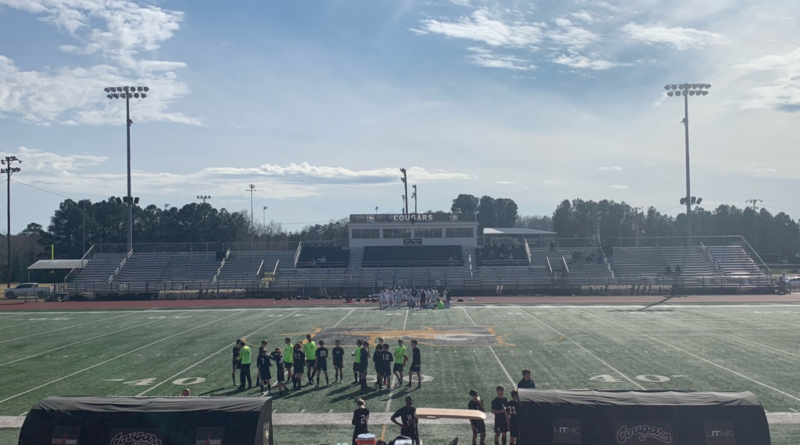 Here’s a look at the weekly boys soccer wrap for the week of Jan. 2 to Jan. 8.

Many soccer aficionados would describe the weather conditions on Tuesday night as perfect soccer weather: thirty-degrees and clear skies. Some may disagree, but it was clear that regardless of weather conditions the matchup between the Madison Central Jaguars (10-1-1) and Germantown Mavericks (11-4-0) was going to be a battle.

The two teams were fighting for their playoff lives, with both suffering regional losses earlier in the season. Clinton was holding onto the number 1 spot in the region with wins over the Mavs and the Jags. This meant that the playoff spot accompanying the number 2 team in the region was essentially up for grabs.

It was Madison Central who made sure to not miss out on the opportunity. The Jags came out on the front foot getting early chances from Will Farthing and Parker Craft. The breakthrough for the Jags came soon after in the 11th minute.

John Hrivnak sent a pass to teammate Caleb Davis at the top of the box. Davis turned quickly, beating his defender to the left side of the field. He then took a shot with his left from 10 yards away that he buried into the right side netting giving the Jags an early 1-0 lead.

Davis struck again in the 18th minute after a great buildup between teammates Regal Perry and Dillan Smith. Perry and Smith worked a give and go that got Smith in space on the right hand side where he then played a cross just behind Davis. With his back to goal, Davis hit an unbelievable volley with the ball soaring over his head and landing perfectly in the corner of the goal.

The Mavs attempted to get themselves back in the game in the 19th minute, when Hayes Adcock laid off a pass into the path of teammate Caden Walley. Walley struck the shot well and just as it seemed destined for the back of the net the Madison Central goalkeeper Landon Parrow made a specular fingertip save.

The Jags scored yet again with Davis completing his hat trick in the 23rd minute. Smith played a great cross to Davis who volleyed home the shot into the top left corner. The Jags took the 3-0 lead into halftime with the game all but finished.

Germantown pulled one back in the 47th of a great strike from Landon Cox. The ball fell to the Mavs defender off a corner where he then struck the ball with great power, ripping the volley into the back of the net.

It was all for naught though, as the Jags added another goal in the dying seconds of the game from Regal Perry completing their dominating victory 4-1.

Madison Central defeated Center Hill 2-1 on Saturday. They now get a bit of a break before heading to face a very talented Northwest Rankin team next Friday.

Germantown regrouped getting a 5-0 region win over Murrah on Thursday. They will face St. Andrews next Tuesday before hosting Clinton on Friday.

The Northwest Rankin Cougars (16-0-1) faced off against the Oxford Chargers (11-6-0) on a beautiful Saturday afternoon. The Chargers have had an up-and-down season but put together a strong week prior to this game getting three wins — one over Lewisburg and two over Grenada.

The Cougars have had arguably the most impressive season of any team to date, going undefeated in 17 contests. They are a team that week in and week out have made a statement that they plan on playing for a gold ball when it is all said and done. The Cougars clearly had no plans of doing anything different on Saturday.

Just two minutes into the game, the Cougars struck and had a lead. Senior Miguel Magagnin played a pass to Miles Williams that found Williams behind the Oxford defense. With just the goalkeeper to beat Williams ripped a shot from 10 yards away on the right side that went straight to the back of the net.

Oxford attempted to even the score in the 14th minute of a shot from Elijah Belk. Belk ripped a long distance shot from 25 yards that required a strong save from the Cougars goalkeeper.

Northwest Rankin really increased their pressure following this and began consistently generating chances. In the 33rd minute it looked like the Cougars had their second when Rory Humphrey worked a give and go that found teammate Victor Castro in a ton of space. Castro took the shot from 8 yards out but a finger tip save from the Oxford goalkeeper kept the game at 1-0 at the half.

The Cougars pulled away in the second half scoring their second in the 46th minute. Forward Rory Humphrey played a pass to Miguel Magagnin who was in a ton of space down the right hand side. Magagnin pushed past the Oxford defense and hit a shot from the right side that he buried in the left corner.

The Chargers were able to get some offense going following this led by midfielder William Mott. Mott consistently connected passes with teammates and even generated chances of his own. Including one in the 50th minute where Mott beat his defender on the end line and laid back a perfect pass to a teammate who was unable to finish the chance.

The Cougars closed the door late when Williams scored in the 79th minute on a great pass from Magagnin. The Cougars stayed perfect taking down the Chargers 3-0.

Northwest Rankin’s perfect season will really be tested next week as they face Pearl on Tuesday and Madison Central on Friday. The Cougars defeated Pearl 1-0 earlier this season.

Oxford regrouped nicely taking down a talented Florence team later on Saturday 3-0. They turn their attention to rival Tupelo in a rematch of a game they lost 1-2 in early December.