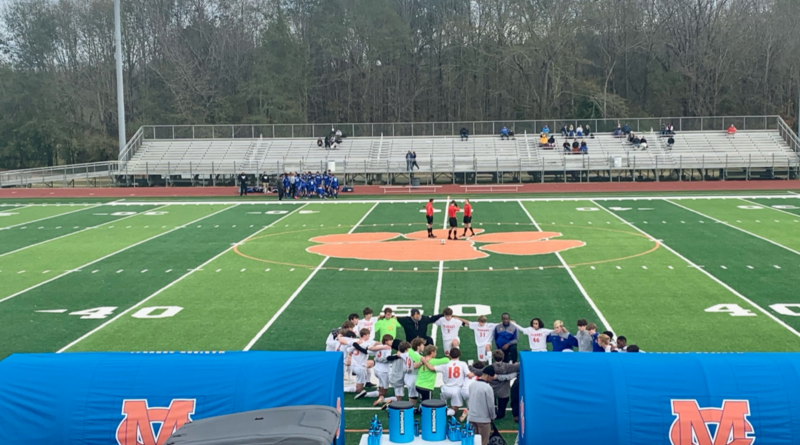 The Clinton Arrows (5-3-2) welcomed the Germantown Mavericks (9-3-0) on Friday night in a huge regional matchup. In a region that includes three fantastic teams, there was no doubt that both teams were aware of the post season implications of this game.

Germantown generated a couple of chances early in the game. This included a shot on goal by Landan Cox from a free kick 35 yards away. Cox got another shot off in the 13th minute when Zion Milow played a corner that fell to Cox whose shot went just wide.

It was Clinton though who would strike first in the 15th minute. Forward Brady Torrence played Luke Hopkins in behind the Germantown defense down the right hand side. Hopkins took a rip of a shot that was parried away nicely by the Germantown goalkeeper. The ball fell to Tanner Jones though who slotted the shot home giving the Arrows an early 1-0 lead.

Clinton kept up the pressure with chances from Brice Nunnery and Luke Hopkins in the 21st and 22nd minutes, however both chances ended in fantastic saves from the Mavs goalkeeper Jaime Duran.

Hopkins chance in particular was a special effort where he back heel flicked the ball onto his left foot. He ripped a curling shot that was beautifully saved by Duran. Duran really kept his team in the game with those saves as the game remained well within reach for the Mavs down 0-1 at half.

In the second half however, Clinton refused to be denied. After some very close chances from Keaton Cole and Price Farrar, the Arrows found their second goal in the 55th minute. Price Farrar played a beautiful through ball pass to Brady Torrence. Torrence, in behind the Clinton defense, made no mistake about the chance, smashing home the finish in the roof of the net.

Clinton really found success getting behind the Germantown defense with their through ball passing. They scored their third of the evening when Aidan Rushing played a through ball that released Brice Nunnery behind the Mavs defense. Nunnery finished home the chance and sealed the statement victory for the Arrows over the Mavs.

Up next: Clinton will now turn its focus to another great regional matchup against Madison Central next Friday night. Germantown will have the opportunity to bounce back in region play when they host Murrah Monday night.

The Madison Central Jaguars (8-0-1) played host to the Tupelo Golden Wave (8-2-0) Saturday afternoon. The two teams entered with two of the best records in the 6A classification.

The Golden Wave made the trip down to the Jackson metro on Friday night dropping a disappointing game to Northwest Rankin, 1-5. They certainly were looking to bounce back against the Jags, but that would be no easy task.

The defending 6A state champion Jags had a strong win earlier in the week over Brandon and certainly did not seem intent on slowing down.

The Jags got a great chance early when in the first minute John Hrivnak sent a great pass to teammate Dillan Smith. Smith absolutely blasted a shot from the right side but just missed to the right of goal.

Hrivnak played another dangerous pass to teammate Terron McIntyre in the 10th minute. McIntyre was behind the Tupelo defense and finished the chance, however the assistant referee’s flag was up indicating offsides.

Tupelo’s Angel Perez connected several passes with teammates in the first half and generated a dangerous chance for his team in the 26th minute. Perez played a teasing cross that looked destined for a teammate; however the Jags goalkeeper Landon Parrow came off his line quickly halting the chance.

Tupelo had a bit of a mad scramble of chances late in the first half. However ultimately both teams proved to be difficult to beat defensively and the half ended at 0-0.

The second half saw the two teams trade chances. Tupelo’s Angel Perez played another dangerous cross in the 55th minute that required a great save. The Golden Wave’s Ryan Thistle also looked to have a 1 on 1 chance in the 60th minute but the Jags goalkeeper beat Thistle to the ball by just a step.

Madison Central seemingly had the go-ahead goal in the 67th minute when John Hrivnak beat a defender to his right and let rip of a blasted shot from the top of the box. It seemed destined for the top right corner, but Tupelo’s goalkeeper made a great diving save keeping the game level.

On the ensuing corner though, Terron McIntyre gave the Jags the late lead. McIntyre actually took the corner and amazingly bent it into the net with his left foot. That piece of genius proved to be the lone difference in the teams with Madison Central taking the 1-0 win.

Up next: Madison Central will look to continue their undefeated streak as they travel to Clinton High School next Friday.  Tupelo will attempt to get back to their winning ways when they host Oxford Tuesday night in a big time regional matchup.