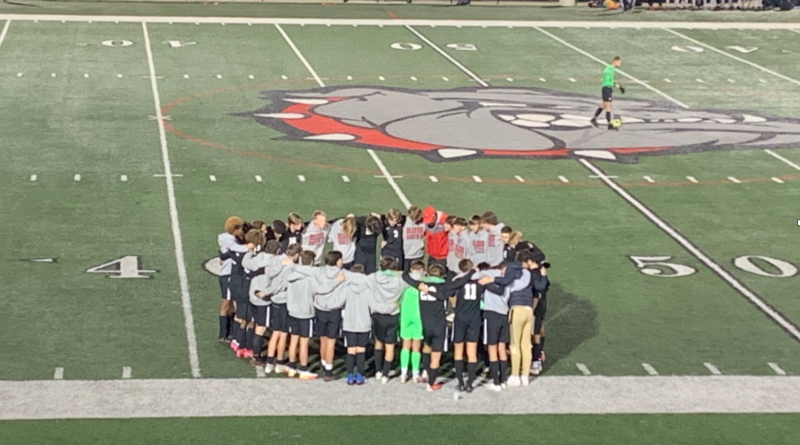 The Arrows enjoyed a nice Thanksgiving break with their last game being a 3-1 over Jackson Prep. They clearly were looking to build on that momentum with a win over Brandon.

The Bulldogs had faced some tough competition to this point in the season which resulted in draws with Madison Central and Florence and a heartbreaking 2-3 loss to Northwest Rankin. Things were not going to get any easier with Clinton coming to town.

Clinton started the game on the front foot, led by senior Luke Hopkins, who got a shot on goal in the very first minute of the game. Hopkins proved to be a dangerous player for Clinton, consistently beating defenders and connecting passes with his teammates.

Most of the first half was a battle in the midfield, with Hopkins and Hayden Thomas attempting to take control for Clinton and Nygel Jobe doing the same for Brandon. Ultimately chances were limited, that is until a barrage of chances occurred for Brandon after the 30th minute.

This included a shot on goal from 12 yards out by Jeison Ramos after Jobe played him a nice pass in the 33rd minute. Brandon kept up the pressure with a pair of shots on goal by Guyton Adcock in the 35th and 40th minutes. The Clinton back line held strong though, bringing the half to a close at 0-0.

Brandon had a great chance early in the second half when it appeared they had earned a penalty kick. Jobe beat his defender on the wide left side of the field and put in a dangerous cross. This led to a violent collision between the Brandon attacker and Clinton goalkeeper. The whistle blew for a foul and just as the Brandon thought they had earned a PK, it was signaled that the foul was being called against them instead.

Clinton had several great chances later in the half, including near goals from Tanner Jones in the 47th and 56th minute. Brandon goalkeeper Cameron Kent made several spectacular fingertip saves in the 60th, 68th, and 69th minutes to keep the score level.

Clinton finally found the breakthrough in the 72nd minute when Logan Cole put in a corner. The kick was flicked on perfectly by Price Farrar straight to the backpost where teammate Charles Chisolm was waiting to put the ball in the back of the net (see video). This moment proved to be the difference in the two teams with the final score of 1-0 in favor of Clinton.

Brandon defeated Sacred Heart on Thursday night 1-0. Now they will look forward to a rematch of the 6A State Championship game when they face Madison Central next Tuesday night.

Clinton was on the road over the weekend against Warren Central who they tied 2-2 and Florence who they lost to 1-5. They will begin region play Tuesday night as they host Murrah High School.

The Northwest Rankin Cougars (10-0-1) arrived at Germantown (8-2-0) High School on Thursday night as arguably the hottest team in the state.

The Cougars had been near perfect on the season with the only blemish being a 1-1 draw to a very talented Biloxi team. With wins over Brandon, Florence, and Oak Grove the Cougars were sure to be a challenge for any team.

Attempting to play spoiler to the Cougars was the hosting Mavericks. The Mavs had also had a strong start the season with 8 wins and only one loss to Pearl. However, the Cougars would be their toughest test yet.

The Cougars came out the gate strong. Within the first five minutes Northwest had three shots on goal, two from Victor Castro and one from Rory Humphrey.

Those two players opened the scoring in the 5th minute when Humphrey rose for a header off a corner. The shot was nicely saved by the Germantown goalkeeper; however, it was spilled right to the feet of Castro who fired the shot home. Northwest Rankin was up early 1-0.

The Cougars kept up the pressure for most of the half. This included several chances from midfielder Miguel Magagnin who had shots on goal in the 8th, 20th, and 30th minutes. Several nice saves from the Mavs goalkeeper Jaime Duran and defensive clearances from center back Landon Cox kept their team in the game.

The Mavs did close the half well with some solid chances, specifically in the 38th minute. The ball fell Connor Stewart at the top of the box where he struck it well, but the attempt was nicely saved by the Northwest Rankin goalkeeper. The half came to a close with the Cougars up 1-0.

The second half was filled with chances for Northwest Rankin, specifically for forward Rory Humphrey. In the 48th minute Humphrey brough down a cross beautifully right to his feet inside the Germantown box. He let rip of a shot that nailed the left side post but stayed out of goal.

Humphrey had several additional chances but thanks to the efforts of the Germantown defense the game remained 1-0. That is until the 80th minute. The Cougars’ Landon Campbell played a perfectly weighted ball that released Humphrey behind the defense. Humphrey made no mistake about this chance, slotting home the shot and sending the Cougars home victorious, 2-0.

The next couple of games certainly did not get any easier for Northwest Rankin. They faced two of 6A’s best in their next contests with Lewisburg on Friday and Ocean Springs on Saturday. They were victorious in both contests by a score of 4-0.

Germantown will look to get back to their winning ways next Tuesday when they travel to Ridgeland. Their game next Friday will be a huge one, as they travel to Clinton to begin regional play.