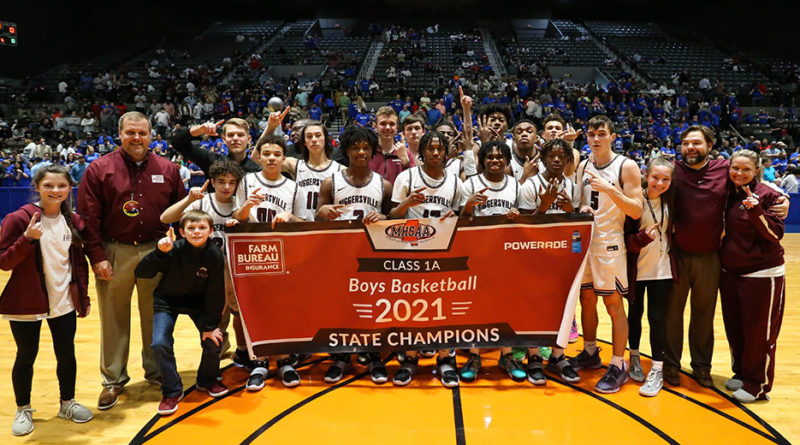 After Ingomar’s Zach Shugars hit a jumper with three seconds left, Biggersville threw in a long inbounds pass that Brooks Brand saved from going out of bounds and Cam Smith picked it up and hit a 3-pointer at the buzzer to lift Biggersville over Ingomar 47-46 to claim the MHSAA Boys Basketball Class 1A State Championship on Thursday afternoon at the Mississippi Coliseum.

“The ball came to me and I just shot it and it went in,” Smith said. “Everyone was down, and I told them it’s not over with three seconds left and I came up with a big shot.”

Ingomar had the ball with 40 seconds left and held the ball until Shugars drove to the free throw line and hit a jumper to give the Falcons a 46-44 lead.

Biggersville called a quick timeout and after getting together to talk it over, the officials put three seconds back on the clock.

Biggersville’s Dylan Rowsey threw the inbounds pass the full length of the court and Brand made an incredibly athletic move to save it from going out of bounds.

“The pass couldn’t have been better. Brooks gave it his all to save it and the pass went right to Cam,” said Biggersville coach Cliff Little. “I told the guys it’s not over until it’s over. I’ve seen some crazy things here in the Coliseum over the years, and thank God we were on the right side of this one.”

Smith finished with 15 points for Biggersville and was named the game’s Most Valuable Player.

Brand had 16 points to lead the Lions.

“Cam can shoot the three. It wasn’t just luck that shot went in,” Little said. “He’s a such a good kid that brings just a calming voice to the team and I couldn’t be more proud.”

Shugars had a game-high 23 points to lead Ingomar, while Tyson Smithey added 10 points for the Falcons (29-6).

“I’m proud of my kids. They fought their tails off,” said Ingomar coach Jonathan Ashley. “They did everything they could to win the basketball game. I told my kids sometimes you deserve better in life and you don’t get it, and they need to learn the lesson now.”