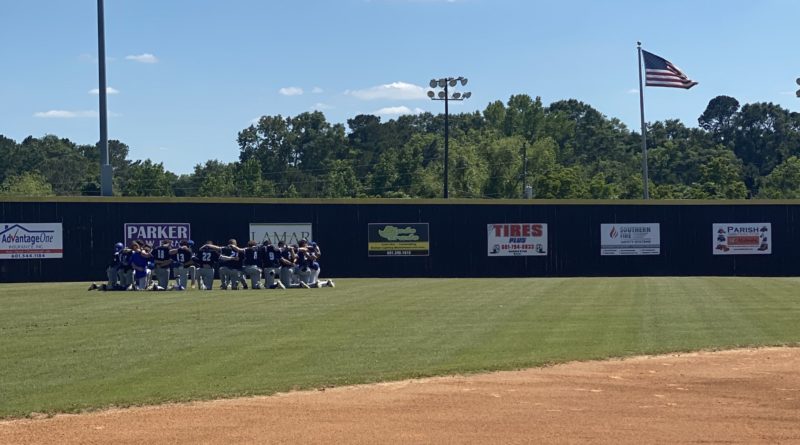 PURVIS – It has been a week of deep emotions for the Stone High baseball team.

On Wednesday, the Tomcat program lost its athletic director and former coach when Kevin Conard passed away suddenly.

But there was still business to attend to, in the third round of the Class 4A playoffs, and the Tomcats took care of it Saturday afternoon, defeating Purvis 7-2 in the second game of the best-of-three series at Tony Farlow Field.

Coupled with an emotional 5-0 victory Friday at Wiggins, Saturday’s win advances the Tomcats (25-6) to the state semifinals, facing Sumrall for the South State Championship beginning Thursday at home. Purvis finished its season 15-15.

“This is the toughest team I’ve ever been around. They have not taken one day for granted. They’ve been out there working every day, and that hard work is paying off right now.”

Stone showed patience against the Tornadoes, trailing by a run for much of the game. But the Tomcats erupted for six runs in the top of the sixth inning to seize command.

The big blow in the sixth was a two-run home run off the bat of senior pitcher Cortez Dennis, who helped himself immensely with one out after Noah Tice led off the inning with a double.

Until then, Tornado starter Hunter Robinson managed to keep Stone at bay on a run and three hits.

“Hunter gave us a chance for most of the game,” said Purvis coach Tony Farlow. “Stone’s got a really good team, and they make you pay for everything. And we paid dearly.”

Purvis jumped into the lead off Dennis in the bottom of the first inning. Jakob Anderson led off by reaching on an error, Robinson followed with a double to the wall in right-centerfield and both runs scored with two out on Jacob Parker’s single.

But that was all the damage the Tornadoes could muster against Dennis (4-2), who pitched six full innings despite back pain earlier in the day. Purvis only managed one single and two baserunners the rest of the game.

“My back was hurting, but I had to come out and do what I needed to do for my team,” said Dennis. “Everything we did was for Coach Conard and G. Mostly, it was fastball, curveball, and both of them were on.”

Stone got an unearned run back in the top of the second. Tice was hit by a pitch leading off, then Braiden Jones hit a comebacker that ended up in centerfield, allowing Rice to reach third, and he scored on a sacrifice fly by Braeden Brewer.

That’s how it stayed until the sixth. After Tice’s leadoff double, Robinson got a strikeout, but he grooved a pitch to Dennis and the Tomcat senior sent it high and deep, well over the wall in left-centerfield.

“I was in a slump; I think I had four strikeouts in a row,” said Dennis. “I had to step and do something big for the team. He threw a slider. I was just looking for anything, with a two-strike approach.”

The Tomcats weren’t done. After Robinson got another strikeout, he surrendered a walk and a hit batter, and that brought Farlow out to get Robinson (1-2). Parker was brought in to face Gehrig Conard, the hero for Stone in Friday’s win.

Conard put aside the grief over his father’s death, striking out 10 in a two-hit shutout and going 3 for 4 in Friday’s win. But he was 0-for-3 Saturday until getting an RBI single in the sixth.

An error on a pickoff play put runners on second and third, and a passed ball got another run home before senior Triston Hickman applied the coup de grace, driving in two runs with a double into the gap in left-centerfield.

“There’s been a lot of adversity but it’s nothing this team can’t handle, nothing G can’t handle,” said Hickman. “(Conard) has been battling adversity his whole life, and had a breakout year this year, and that reflects the whole team.

“I was 0 for 3 for the game, with a two-strike approach, so I knew I needed to get something going for the team. I got a breaking ball, sat back on it and drove it over the shortstop’s head.”

Dennis retired Purvis in order on four pitches in the sixth, then gave way to Brewer for a 1-2-3 seventh.

“Cortez has gotten much better with his pitching as the season has gone along, with fastball command, getting ahead of hitters and working through tough counts,” said Miller. “As you move on, it gets tougher, and he’s gotten tougher as well.”

Although the season ended at .500 for Purvis, a deep playoff run gives the Tornadoes some satisfaction.

For Stone, these are all but uncharted waters. The Tomcats have not reached the state semifinal round since 1991, and they face a seasoned opponent in third-ranked Sumrall, which got past North Pike 4-3 in 10 innings on Saturday to advance.

“We really don’t care who we play,” said Miller. “This is what we played all year for: the chance to open South State at home.

“The outpouring of support for our program has been outstanding, and the atmosphere last night was like nothing I’ve ever experienced.”