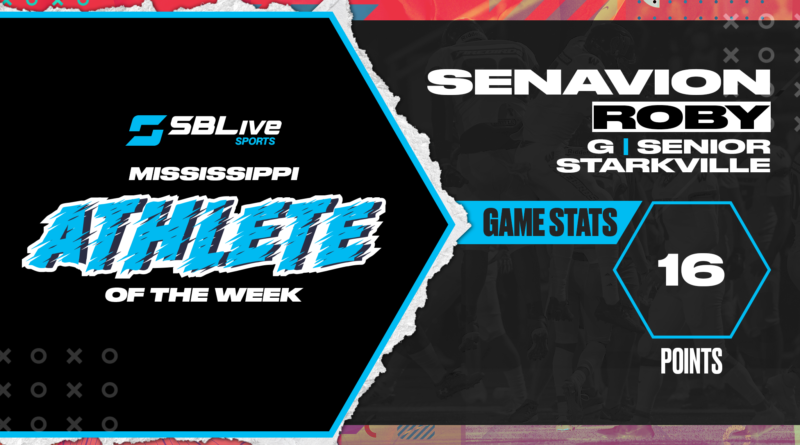 The senior had 16 points for the Yellowjackets in a game against Forest Hill.

Roby received 47.85% of the vote, beating out Leake Academy’s Katye Jones who finished second with 32.84%. Raymond’s Leah Sutton finished third with 8.2% and Hernando’s Damyia Cummings finished fourth with 4.65%. There were over 55,000 votes tallied this week!

Senavion Roby, Starkville Boys Basketball: Had 16 points in a game against Forest Hill.

Damyia Cummings, Hernando Girls Basketball: Had 19 points in a 51-41 loss against Desoto Central.

West Hill, Tupelo Boys Soccer: Hill earned Player of the Game honors and scored a goal in a 2-1 win over Oxford.

Avery Hooker, Tupelo Girls Soccer: Had the lone goal and was Player of the Game in a 1-0 win over Oxford.

Mallory McMillin, Tupelo Girls Soccer: McMillin scored a goal for the Golden Wave in their game against Starkville.

John Ford, Sumrall Football: Went 9-of-21 passing for 128 yards with a touchdown and was named the South’s Offensive Most Valuable Player in the 73rd Annual Bernard Blackwell North-South All-Star Game.

Dillon Williams, Southaven Football: Had seven tackles and a sack and was named the North’s Defensive Most Valuable Player.

Terrell Dixon, Brandon Boys Basketball: Had a game-high 17 points to lead Brandon in a 66-36 win over Northwest Rankin.

Katye Jones, Leake Academy Girls Basketball: Had 16 points and 10 rebounds in a 69-24 win over East Rankin.

Derryon Gray, Enterprise Boys Basketball: Had 34 points and was honored with scoring his 1,000th career point before overtime thriller loss to West Lauderdale 71-66.

Samya Brooks, Pontotoc Girls Basketball: Had 19 points, 10 rebounds and 2 blocks in a 54-52 win over Collierville.