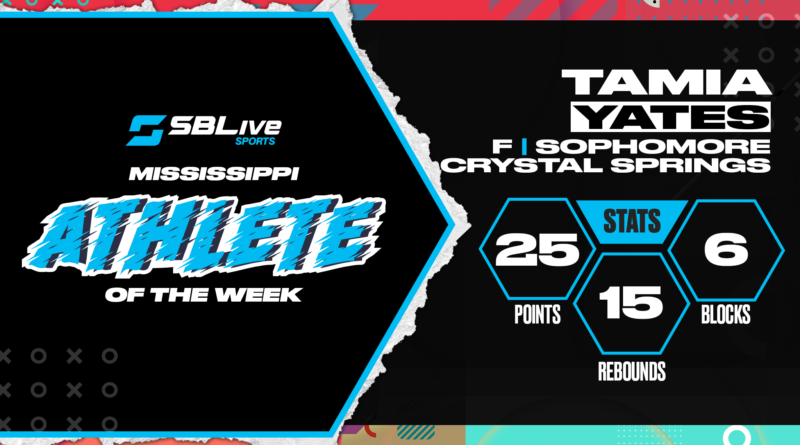 The sophomore had 25 points, 6 blocks, 15 rebounds, and 3 assists in the Tigers’ game against Hazlehurst.

Yates received 38.54% of the vote, beating out Senatobia’s Jagger Young who finished second with 21.58%. Biggersville’s Asia Stafford finished third with 8.98% and Pontotoc’s Jaylen Edwards finished fourth with 8.06%. There were over 30,000 votes tallied this week!

Connor Rogers, Starkville Boys Basketball: Had 18 points in a 72-69 win over Brandon.

Khalid Moore, Poplarville: Tallied six tackles, and one interception in a 20-0 loss to Team Alabama in the 35th annual Mississippi-Alabama Football Classic.

Avery Hooker, Tupelo Girls Soccer: Had a goal and earned Player of the Game in a 2-1 win over Madison Central.

Tailynn Remmel, Clinton Girls Soccer: Remmel scored a goal in the 81st minute to propel Clinton to a huge region win over Germantown 1-0.

Jaylen Edwards, Pontotoc Boys Basketball: Had 39 points, 3 assists, and 3 rebounds in a 87-46 win over North Pontotoc.

Hannah Seago, Biggersville Girls Basketball: Led the Lady Lions with 25 points, 4 rebounds, and 5 assists in a 64-57 win over Pine Grove.

Asia Stafford, Biggersville Girls Basketball: Had 20 points, 8 rebounds, and 2 blocks in a 64-57 win over Pine Grove.

Brice Nunnery, Clinton Boys Soccer: Recorded a goal and an assist in a 4-0 win over Germantown.

Kyle Traylor, Lafayette Boys Soccer: The outside midfielder set up many scoring opportunities and prevented many counter attacks for a dominant possession win 2-0 over Lake Cormorant in their first District game.

Clara Garland, Tishomingo County Girls Basketball: Had a triple-double with 18 points, 23 rebounds, and 10 blocks in 64-50 win over Clinton.