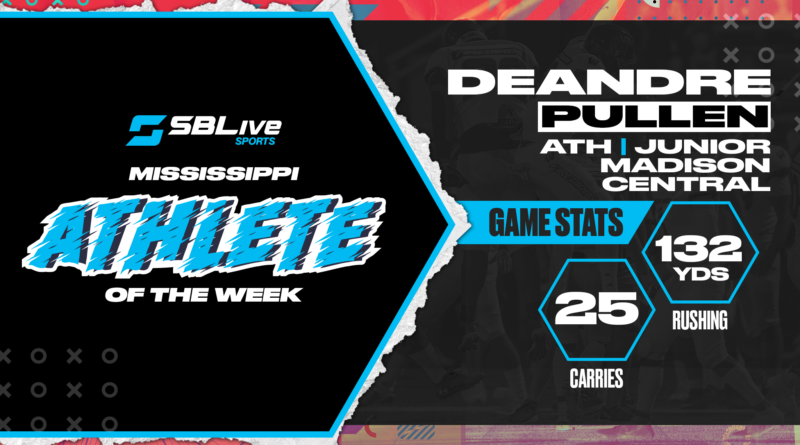 The junior led the rushing attack with 25 carries for 132 yards in Jaguars’ 24-17 6A state championship victory.

Pullen received 44.49% of the vote, beating out Walnut’s Madilynn Vuncannon who finished second with 32.42%. Vicksburg’s Amari Johnson finished third with 8.98% and Northwest Rankin’s Mallory Tapper finished fourth with 4.87%. There were over 44,000 votes tallied this week!

Amari Johnson, Vicksburg Girls Soccer: Johnson, a midfielder/forward, managed 20 saves and only permitted 4 goals in the Gators’ loss to Florence.

Mallory Tapper, Northwest Rankin Girls Soccer: Tapper netted a free kick from 50 yards away, to be the lone difference in the Lady Cougars’ 2-1 win over Germantown.

Rory Humphrey, Northwest Rankin Boys Soccer: Humphrey had a goal and an assist in Cougars’ 2-0 win over Germantown.

Quez Goss, Scott Central: Goss completed 17 of his 24 passes for 350 yards, rushed 22 times for 103 yards and accounted for eight touchdowns in 72-24 2A state title win over Leflore County.

Omar Johnson, Columbia: Finished with a net of 89 yards on 21 carries, and had the game-winning two-point conversion to lift Columbia to a 22-21 4A state title victory over Senatobia.

Lester Miller, Brandon: Miller caught eight passes for 170 yards and had a touchdown in 24-17 6A state championship loss to Madison Central.

Jake Norris, Madison Central: Earned Most Valuable Player honors after accounting for 179 yards and scoring the go-ahead touchdown in 24-17 6A state title win over Brandon.

Anthony Newell, Bay Springs: Led the way for the Bay Springs defense with 10 total tackles in 32-12 1A state title win over Simmons.

Demarrio Booth, Jefferson Davis County: Booth earned MVP honors after gaining 205 yards on 17 carries with four touchdowns and recording an interception and one tackle for a loss on defense in 42-10 3A state championship win over Amory.