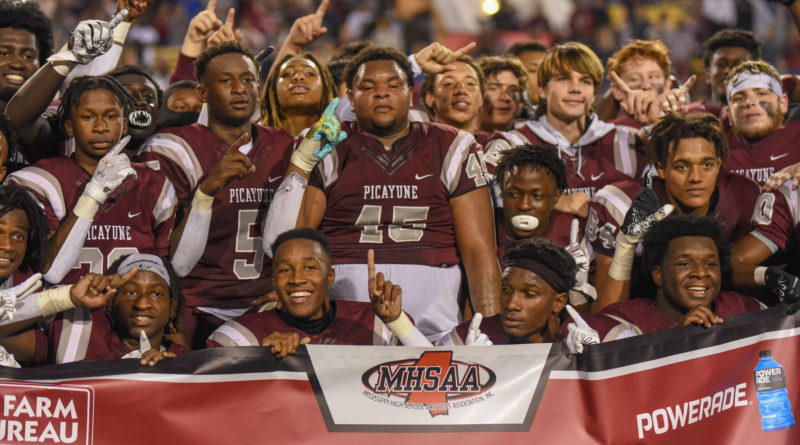 HATTIESBURG — Picayune has spent the last two years under coach Cody Stogner trying to emulate the kind of program Chris Chambless had built at West Point.

In Saturday night’s MHSAA Class 5A Championship game, they beat the Green Wave at their own game.

The Maroon Tide rushed for 393 yards and got a late defensive touchdown to put the finishing touches on a 40-21 win to clinch the program’s sixth state championship and first since 2013.

“It doesn’t matter who you play in the title game — it always feels good to win the last game,” Stogner said, grinning and holding the golden ball. “But I don’t know how you don’t want to mirror what those guys have been doing year in and year out. They show up every game and play it the right way, that’s why I’m so proud of my guys and what we’ve accomplished.”

The Maroon Tide (14-1) were relentless in their ground attack. They scored on six of their first eight possessions and threw the ball just three times all night.

The two teams traded long touchdown drives and fought to a 14-14 tie until Picayune got the big play on a 73-yard touchdown run from Chris Davis with 3:29 left in the second quarter.

The Green Wave blocked the extra point, but the Maroon Tide took the 20-14 lead into the half.

West Point got the lead for the first time after the first possession of the second half. Keshawn Henley busted a 22-yard run to set up Cameron Young’s third touchdown of the evening on a five-yard carry. Alex Harper banged home the point-after to give West Point the 21-20 lead.

Darnell Smith broke free for a 59-yard touchdown on Picayune’s ensuing possession to put the Maroon Tide ahead 27-21 with 8:47 to go in the third quarter.

After the Tide defense forced a punt, the offense went back to work with a 12-play, 80-yard drive that ate 6:13 off the clock before Dante Dowdell powered into the end zone from two yards out to give Picayune the 34-21 lead.

Jamonta Waller put the game on ice by scooping up a West Point fumble and taking it 35 yards the other way for a touchdown on the ensuing West Point possession.

“I don’t even know bro,” Waller said when asked about the play. “I just saw it there and was like man, I gotta go score we gotta get this done. This is crazy man.”

As the final seconds ticked down, legendary Picayune coach Dodd Lee found his protege Stogner on the sidelines and embraced him in a bear hug before the players gave Stogner the ice bath.

“That man is probably had the biggest influence on my life of anyone outside of my father,” Stogner said, letting some of the emotion get to him. “He coached me, he hired me as a coach and gave me a chance. He helped me replace him as the coach here. It’s just a very special moment.”

Dowdell earned MVP honors, rushing for 148 yards and two touchdowns. He averaged 5.9 yards a carry, putting the finishing touches on a masterpiece of a season.

“I’m not the kind of guy who needs extra motivation,” he said. “My motivation is that I want to be known as the best running back in the state, and I think I proved that I am tonight.”

Chris Davis rushed eight times for 139 yards and two scores, and Darnell Smith added 88 yards on 10 carries with a touchdown.

After a productive first half, West Point only had five second-half possessions and ended the last three with the big fumble and back-to-back turnovers on downs.

The Green Wave gained 309 yards of total offense, but was forced to pass the ball an uncharacteristic 18 times after falling behind in the second half.

“We knew we were going to have to control the line of scrimmage on both sides of the ball to win the game and we struggled with that,” Chambless said. “The situation called for us to throw the ball more than usual, and we executed a couple of times in the passing game, but that certainly wasn’t the game plan.”

The victory gave Picayune revenge for the loss to West Point the last time the two teams met in the 2019 5A Championship game. It was the first championship for Stogner, who is in his second year at the helm of the program.

The State Championship berth was the sixth in six years for West Point, which also fell in the 2020 championship to West Jones.