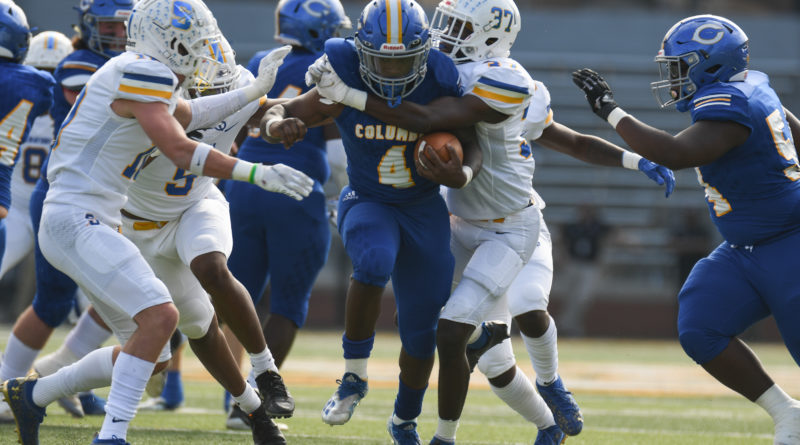 HATTIESBURG – Columbia was in big trouble as the final minute of the third quarter ticked away Saturday.

The Wildcats trailed Senatobia 21-14 and the Warriors had the ball at the Columbia 27-yard-line with a chance to make it a two-score game.

But senior Kentrell Jackson stepped up for the Wildcats, picking up a fumble and zig-zagging 81 yards for a defensive touchdown.

Senior Omar Johnson ran for the conversion and the Columbia defense did the rest, holding on for a thrilling 22-21 victory in the Class 4A state championship game at M.M. Roberts Stadium on the Southern Miss campus.

“It starts in offseason,” said Columbia head coach Chip Bilderback. “This is what you prepare for. You put them in tough situations in the offseason, so that when your back’s against the wall, you keep fighting, and you hope your players learn that in the offseason.”

The heavily-favored Wildcats got all they wanted from upstart Senatobia, making its first state finals appearance since winning the 3A championship in 2004.

The Warriors scored touchdowns on all three of their possessions in the first half to take a 21-14 lead into the halftime locker room.

“I knew they were going to run the ball away from me,” said senior defensive tackle Jehiem Oatis, the 4A Mr. Football. “So, I knew I had to step up and help some our other players to get into position to make the tackle.”

Columbia started off strong, however, taking the opening kickoff of the game 80 yards on 13 plays, using up almost seven minutes off the clock. Senior Joshua Smith hauled in a swing pass and dove into the end zone for a 9-yard touchdown pass.

Johnson finished with a net of 89 yards on 21 carries, with 85 yards coming in the first half.

“We knew we had to come out and run the ball,” said Johnson. “We had to motivate each other and keep fighting.”

“We knew we had to spread it out a little bit, and we had some success with it,” said Senatobia coach Brooks Oakley.

After getting a three-and-out, the Warriors went right back to work at the Wildcat 42 after a short punt.

Again, it was Mabry who was wide open in the end zone after the Warriors went for a double-pass play after a lateral to junior Jabrysten Abram for a 20-yard scoring play.

Jackson took the ensuing kickoff 34 yards to the Wildcat 45-yard-line, igniting an 11-play scoring drive that ended with a 1-yard run by Johnson.

Senatobia wasn’t done, however, and milked all but 10 seconds off the second-quarter clock on a 44-yard, 11-play scoring drive, scoring on a 6-yard pass from Hullette to Mabry.

“They just came out and hit us in the mouth,” said Bilderback. “They threw the ball effectively in the first half, and that was something we were worried about coming in, because we hadn’t faced a team that really spread it out like that.

“But the main thing was, our defense got back in their gaps.”

The big play was a fake punt on a fourth-and-9 from the Columbia 33, with Mabry throwing a 21-yard pass to Abram for a first down. Mabry only had 11 catches and two touchdowns for the season, but he was the x-factor for the Warriors in the first half.

“We’ve got speed on defense, and they did a great job of running away from (Oatis) and taking him out of the game in the first half,” said Bilderback. “Credit to them, but Jeheim made some big plays down the stretch.

With Senatobia getting the ball to start the second half, Columbia knew it had to make some adjustments.

“We talked about at halftime that we just needed to come together, calm down and stop patty-caking,” said Oatis. “We knew we had to step up our intensity level and have fun.”

It’s a good thing they did, because the Warriors smothered the Wildcats’ offense in the second half, holding Columbia to a net of just 7 yards on offense after halftime, and picked off two passes in the third quarter.

After the second pick gave Senatobia the ball at the Wildcat 38, things looked dire for Columbia. Hullette converted a fourth down on a 3-yard pass to Abram to the 27, and on third down, Warrior senior Jordan Osborn swept the left side for a 5-yard gain.

But Wildcat senior linebacker Will McLendon knocked the ball loose on a hard hit and Jackson did the rest, picking up the loose ball at the 19 and weaving his way all the way to the end zone as the third-quarter clock ran out.

“It was just going through my head that I had to make a play,” said Jackson. “Finally, I made it happen. I just had to get it into the end zone. Once I scored, I knew I put my team in a good position, and my teammates brought it home for me.”

Columbia initially lined up to kick a tying PAT, but when the Warriors were called for encroachment, Bilderback decided to go for the lead. Oatis lined up and left tackle and Johnson followed him untouched for the 2-point conversion.

“We wanted to take the momentum and not give it back,” said Bilderback. “We thought we could, so we took our snap count down. They jumped and gave it to us on the yard-and-a-half line and we knew nobody was going to stop Omar Johnson from that distance.”

With their offense going nowhere, the Wildcats put the game on their defense, and they forced two three-and-outs in their half of the field, before Senatobia mounted a potential game-winning drive with 3:39 to play.

“We had to eliminate the mistakes,” said senior linebacker Jalon Anderson, who finished with 15 tackles to lead Columbia on defense. “We just told each other to pick our heads up, that we were going to out there and win this game.

“We came out and played our hardest. All 11 players played their best in the second half. We said from the beginning, defense wins championships. We’ve been fighting every single game. We had to come out here today, hit somebody and win this game.”

Senatobia started at the Wildcat 48 and Hullette got two quick first downs on runs of 9 yards, 8 yards and 18 yards, with 7 yards added for a late hit out of bounds.

Abram lost 2 yards on first down and Hullette was stopped for no gain on second down. On third down, Hullette appeared to have an open lane for the end zone, but Oatis filled the hole and stopped the play at the 4-yard-line.

“We studied the quarterback all week in practice,” said Oatis. “We knew if he didn’t throw it, he was going to scramble and try to get it into the end zone. So I had to step up and make a big play.”

On fourth down, Oakley sent his kicker out for a short field goal to win the game, but the kick went wide left, and the celebration was on for Columbia.

“I felt good about our kicker,” said Oakley. “He just missed it. I hate it for him. He’s a great kid and I love him to death.”

It was a sweet victory for the Wildcat seniors, who had come so close the previous three years.

“It feels like I’m on top of the world,” said Johnson. “This has been four years of coming close and not getting there. I love this.”