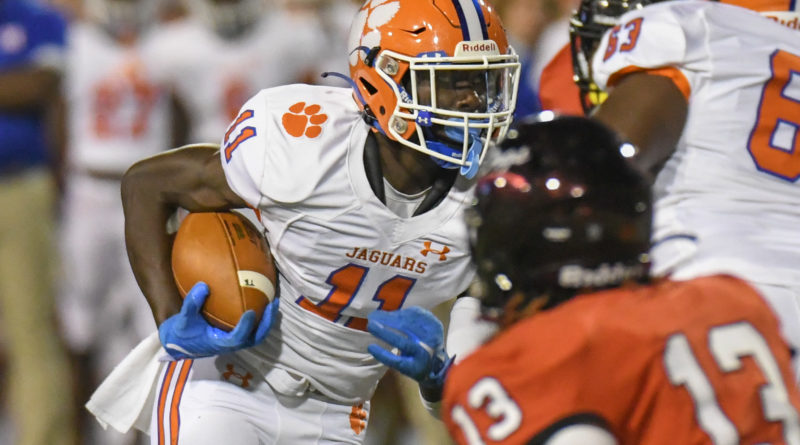 HATTIESBURG — Big Blue is back on top of the Mississippi football world.

The Madison Central Jaguars erased an early 7-0 deficit to beat Brandon 24-17 in a thrilling finale Friday night and captured the 2021 MHSAA Class 6A Championship for the first time since 1999.

“It’s been a long time coming,” Madison Central coach Toby Collums said. “More than anything I’m proud for these kids for finding a way to win a state championship, especially against a group that’s as good and as well-coached as Brandon.”

As evenly matched as Friday night’s thrilling MHSAA Class 6A Championship game between Brandon and Madison Central was, you just got the feeling it was going to come down to one key play late in the fourth quarter.

Like so many games this season, it was the Jaguars who got the big turnover that resulted in a 24-17 win

With the score tied 17-17 and Brandon driving near midfield,  Madison Central linebacker Braxton Barney ripped the ball out of Jarvis Durr’s hands, and Vic Hollins fell on it to set the Jaguars up with a 1st-&-10 at midfield with 7:34 left in the ball game.

Seven plays and 52 yards later, Madison quarterback Jake Norris powered in from the two-yard line to put the Jaguars ahead 24-17 with 3:41 to go.

The Jaguar defense made one last stand, and Brandon went four-and-out on its final possession when Braxton Barney put a vicious sack on Brandon quarterback Landon Varnes for an eight-yard loss on 3rd-&-1 and a fourth-down pass to Joshua Coe came up one yard short on 4th-&-9.

“We made some big stops late in the game,” Collums said. “I didn’t think we did a very good job in the first half, but we came on late and the turnover was huge because we were able to turn it into points.”

The Jaguar defense held Brandon to an average of 3.3 yards on 40 rush attempts, and although MC gave up 292 to Brandon quarterback Landon Varnes through the air, they forced 10 negative plays.

Vic Hollins finished the game with a game-high 11 tackles, while C.J. Barney had 10 and four stops for a loss, including one sack.

The Jaguars (13-1) rode a potent ground game all season, and rushed for more than 200 yards to avenge their only loss of the season, to Starkville, last week with a 34-13 road win in the 6A North Finale.

On Friday night, they went for 222 more.

Deandre “Dae Dae” Pullen led the way with 25 carries for 132 yards. Norris, who was playing in the place of injured Jaguar quarterback Vic Sutton after the starter suffered a torn ACL two weeks ago, ran for 55 yards and the go-ahead touchdown.

Jaguar receiver Isaiah Spencer also ran for a touchdown — a one-yard dive that gave Madison its only first-half touchdown — and made the longest play of the game on a 79-yard touchdown reception from Norris in the third quarter.

Norris faked the handoff and took the top off the defense with a long bomb to Spencer, who was running free in the open field five yards behind the nearest Brandon defender. The play put Madison ahead 17-10 halfway through the third quarter.

“That play is called ‘rip post,’” Spencer said. “We had been running it right at them and we knew the safeties were cheating up because they didn’t think Jake could throw it, and I was wide open.”

Norris wound up earning Most Valuable Player honors after accounting for 179 yards and scoring the go-ahead touchdown.

When asked what he would have thought just three weeks ago about being named MVP of the championship game, Norris cracked a huge smile.

“I never would have believed you in a million years,” he said. “I had like one touchdown all season at tight end. This is crazy… and awesome.”

Brandon’s Landon Varnes was heroic in defeat. The 15-year-old sophomore completed 16 of his 27 pass attempts and hit one big play after another to Lester Miller, who caught eight passes for 170 yards, including a 23-yard touchdown pass on Brandon’s opening drive that put the Bulldogs ahead 7-0 early.

Varnes played one of his best games of the season despite relentless pressure from the tough Madison front seven. In the end, it wasn’t enough.

“He’s a freaking competitor,” Brandon coach Sam Williams said. “He’s just a competitor. Really proud of the way he played tonight, proud of where he’s at right now and even more excited about where he’s going to be a couple of years from now.”

The early touchdown pass gave Brandon the quick start Williams thought his team needed going into the game, but the Bulldogs punted on their final three possessions of the first half and turned it over on downs twice in the second.

Durr, who ran for more than 170 yards a week ago against defending champion Oak Grove in the South State Championship, rushed 37 times for 116 yards, including a one-yard scoring dive in the third quarter to tie the game at 17-17.

“It was exactly the kind of game I was expecting,” Williams said. “When you have two elite football teams — whether you are playing Saturday, Sunday, Friday or Thursday — it comes down to who makes fewer mistakes. We didn’t play very clean in the first half, and I thought we out-played them in the second half, we just had that one turnover right there and that’s the difference in the ball game.”

“It’s hard to win a championship,” he said. “I don’t care if you are in your first year or your 27th year. You have to have a great team, a special group of young men and you’ve got to get some breaks.”