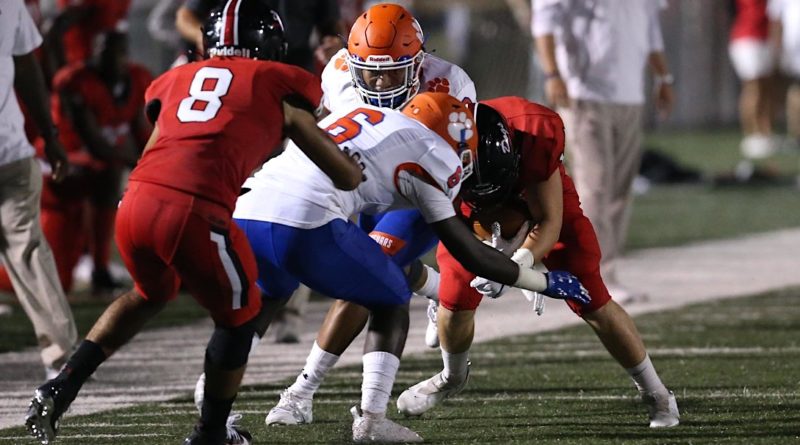 There will be some big, physical football teams that take the field this weekend in Hattiesburg at the MHSAA Football State Championships, but none more than in the 6A Finals between Madison Central and Brandon.

Madison Central (12-1) has claimed 15 regional titles since the school’s inception in 1991, but only one championship in 1999. Brandon (11-2) has won seven region titles since 2000, but the state championship has eluded them in the playoff era.

Both programs are Jackson Metro-Area titans who have been knocking on the door of a state title for a couple of years, but the similarities don’t stop there.

Both teams are led by first-year head coaches. Sam Williams came to Brandon from Ridgeland and Toby Collums came to Madison Central from Northwest Rankin before the season.

Both offenses have built their success in 2021 on the running game. Madison Central has amassed more than 2,700 yards on the ground behind a big offensive line that features four seniors. Although the Bulldogs like to throw the ball a little more often, Brandon topped the 2,700-yard mark in their 21-20 win over Oak Grove last week.

“We’ve morphed into a running team offensively,” Williams said. “What we’ve done on the streak we’ve been on is we’ve found success running the ball and mixing in the throws down the field.”

Both teams have had to adjust to key injuries down the stretch, too. Brandon lost star sophomore tailback Nate Blount, who had rushed for more than 1,400 yards, in its first-round win over Harrison Central. Madison Central lost starting quarterback Vic Sutton and 1,000-yard rusher Robert Dumas Jr. in its second-round win over Oxford.

For Brandon, Blount’s injury meant an expanded role for Jarvis Durr, who answered the bell last week with 142 yards on 22 carries and two touchdowns in the win over Oak Grove.

For Madison Central, backup tight end Jake Norris has stepped in at quarterback and DeAndre Pullen has picked up the slack at tailback. Last week against Starkville, Norris threw just eight passes, but completed half of them for 37 yards and a touchdown and rushed nine times for 42 yards. Pullen, affectionately known as Dae Dad, averaged 8.9 yards on 21 carries with two touchdowns.

“I can’t say enough good things about Jake,” Collums said. “He played limited snaps in practice this year, especially at quarterback, so it’s been impressive the way he’s been able to operate. He’s a tough, hard-nosed football player that the other players have really rallied around.”

Both coaches want to dictate the pace of Friday’s game, but for different reasons.

Brandon is at its best when it is playing with the advantage on the scoreboard. The Bulldogs have taken quick leads in nine out of 11 games on their current winning streak, which has made opposing teams change what they do offensively to play catch-up.

The strategy Friday will be no different.

“Ideally, we want to start fast,” Williams said. “If we can run the football and hit a big play or two and get ahead, it could force them to do some things offensively that they are less comfortable doing.”

For Madison Central, it’s about making the most of possessions and coming away with points — something they did extremely well against Starkville last week with two field goals and three touchdowns in five red zone trips.

If they can get a lead and amp up the pressure on Brandon quarterback Landon Varnes, the Jaguars feel like they can win the championship on the shoulders of their defense.

“We had an idea of what we wanted our identity to be when we got through spring ball,” Collums said. “Then we got into fall camp, everyone was healthy and we saw how much speed we have. People make a big deal about size, but if you’ve got a bunch of guys who can run like we do, you have to feel good about your team.”