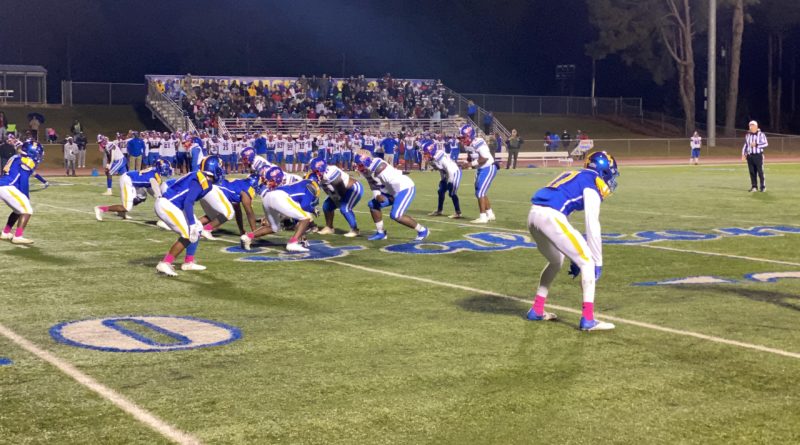 Undefeated Scott Central looks like an unstoppable juggernaut headed into Saturday’s MHSAA 2A Football Championship game, but Leflore County coach Eric House thinks his Tigers are up to the challenge.

The Rebels (14-0) come into Saturday’s game having ran roughshod over the best teams in 2A South, scoring 228 points in four wins over Amite County, Lake, Newton and Pelahatchie.

Scott Central has continued to flourish under first-year head coach Jeff Stockstill, who came to Forest after serving as an assistant at Clinton.

“The message to the guys this week has been simple: just show up and do your job,” Stockstill said. “It’s easy to get on a stage like this and think you have to do more or that something extra special has to happen. We just need to show up, do our job and take care of the normal stuff: avoiding turnovers and don’t rack up a bunch of penalties.”

Scott Central quarterback Quez Goss is a one-man wrecking crew. He has completed 61 percent of his 224 pass attempts for 2,447 yards with 35 touchdowns and four picks. The Rebels have also run for more than 2,000 yards as a team, despite not having a 400-yard rusher.

The receiving corp is as good as any you’ll find in 2A, featuring four players with 30 or more receptions. Dee Burks has led the way, with 54 catches for 942 yards. He and Javieon Butler (31 catches, 774 yards) are tied with a team-high 14 scoring receptions.

They could create problems for the Leflore County defense, which has only given up 41 points in four post-season games. The Tigers don’t have great size on defense, but they are a typically fast Delta team.

“It’s easy to see why they are 14-0 when you look at them on film,” House said. “They are well-disciplined and they have a bunch of playmakers. What really stands out is that quarterback and those tall receivers. It’s going to be a big challenge for us to match up with those guys, and (Goss) has made plays game after game. I feel like he’s the steering wheel on their bus, and we’ve gotta find a way to contain him or keep him off the field.”

The Tigers (10-2) are a great story, mostly because they didn’t play football last season when their district opted out of football due to COVID-19 concerns.

In 2019, Leflore County lost by one point to a Lumberton team that went on to win the 1A State Championship. House said his team started to believe it could compete for a state title, then the 2020 season was ripped out from under them.

“The guys weren’t allowed to come to the school or get in our weight room,” House said. “But the kids took it upon themselves to go to the local gyms, either alone or in groups, and some worked out in their front yards. When they came back this summer, I noticed my kids were stronger than when we left. You have to give them a lot of credit, because they put a lot of individual time in that helped us get to where we are today.”

House, who is in his fifth year at Leflore County, has one of the Delta’s most explosive players in tailback Dekari “Turbo” Johnson — a 5-foot-6, 150-pound spark plug who earned his nickname by lighting up scoreboards from Charleston to Maben.

“The first thing that jumps out at you about the is that they have a lot of team speed,” Stockstill said. “But they also have size. They’ve got a guy who can really run the ball, and they’ve caught some breaks in the playoffs but they’ve been playing great defense and moving the ball.”

House said the Tigers will need to be balanced against the Rebels.

“They are big up front and they like to send a lot of run blitzes,” he said. “All five of our guys up front are first-year starters, but we’ve seen a lot of different fronts and schemes on our playoff run, and we’re hoping all of the tough teams we’ve played along the way have helped prepare us for what we’ll see Saturday.”