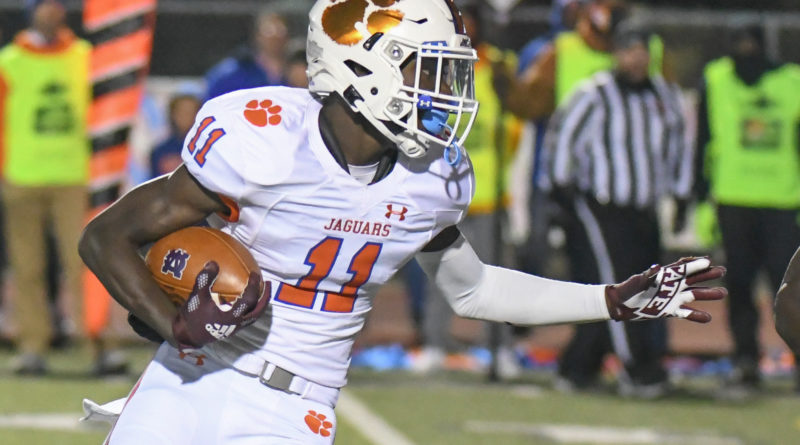 STARKVILLE — The Madison Central faithful are partying like it’s 1999.

The Jaguars picked up their biggest win in more than two decades and avenged their only loss of the season with a 34-13 win over Starkville Friday night to clinch the MHSAA Class 6A North Championship.

They will face the Brandon Bulldogs in the 6A Championship at 7 p.m. Friday at M.M. Roberts Stadium in Hattiesburg.

“I don’t know that I have the words,” first-year Madison Central coach Toby Collums said. “It feels absolutely wonderful. It was 1999 the last time Madison Central played for a state championship, and these guys deserve to be here. They deserve what they’ve accomplished here tonight. I’m so proud of our team, our community and anyone who had a hand in this.”

Collums chose his words wisely, because just about every Jaguar had a hand in Friday night’s win.

DeAndre Pullen did the heavy lifting, rushing for 187 yards on 21 carries and scoring two touchdowns in the third quarter. His first score, from six yards out, gave the Jaguars a healthy 24-7 lead. His second — a 69-yard gut-punch — gave Madison Central an insurmountable 31-7 advantage.

“We had to step up and maintain the pressure,” Pullen said. “They came back on us last time we were up here, and we couldn’t let that happen again. It was all about maintaining.”

The Jaguars (12-1) built a 16-7 first-half lead by winning the field position battle.

After Starkville responded to an early Max Zuluaga field goal with an 82-yard touchdown drive to take a 7-3 lead, Pullen returned the ensuing kickoff 45 yards to the Starkville 42. Eight plays later, B.J. Washington capped the drive with a six-yard touchdown to put MC ahead 9-7.

Starkville opted to go for it on 4th-&-1 at the Madison Central 36-yard line on the ensuing drive, but Sam Rice and B.J. Washington met Jacket tailback Tyler Nichols in the backfield to get the turnover on downs.

Pullen busted a 23-yard run on the very next play to jump-start a nine-play, 63-yard touchdown drive capped by Jake Norris’ 11-yard pass to Isaiah Spencer that gave the Jags the 16-7 lead.

After that first turnover on downs, the Starkville offense just couldn’t get any momentum.

Pullen, who doubles as a pass-rushing linebacker, got a huge sack for a 13-yard loss on the Jackets’ next possession to force a punt.  Just before the half, it was Jags’ linebacker Ryan McCall who made a huge tackle on 4th-&-1 at the Madison Central 34 to get another turnover on downs and preserve the lead going into the break.

It was more of the same in the third quarter — Starkville went three-and-out on its first possession, then lost 21 yards in two plays and ultimately got called for holding in its own end zone for a safety on its second.

“We’ve been working all week,” linebacker C.J. Barney said. “We wanted to maintain the juice and do the little things right. We just watched film from last game (against Starkville), worked on the things where we had mistakes and you saw the corrections tonight.”

By the time Starkville (12-2) finally broke through with a 32-yard touchdown pass from Trey Petty to Qua Jenkins, it was too late — the Jaguars were still ahead 31-13 with 10 minutes left in the game.

The Jackets got two shots at an on-side kick, but they were called for kick-catch interference on their first try and failed to recover the second.

They might not have been able to score the three more touchdowns it would have taken if they had the possessions and the time to do it.

The Jaguar defense thrived on negative plays, making 13 tackles behind the line scrimmage as a team. Sam Rice and Vic Hollins each a had 2.5 and J.T. Evans had three. Hollins added 1.5 sacks.

They harassed Petty all night. The stellar sophomore completed eight of his 15 passes for 129 yards and rushed 17 times for 67 yards, but that rushing total included a pair of 38-yard runs in the second half.

“They definitely won the battle up front on both sides of the ball,” Starkville coach Chris Jones said. “That’s where you win games at this level, especially in the playoffs. So that’s on me — we should have had a better plan to get around that mismatch.”