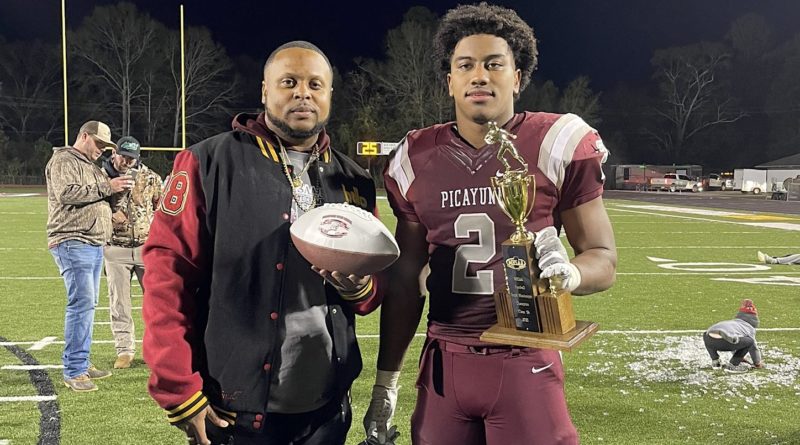 PICAYUNE — Chris Davis scored from 6 yards out with 1:22 left to play in the game to give Picayune a 32-28 win over Laurel Friday in the MHSAA South State Finals. The victory sets up a rematch for the Class 5A state championship with West Point.

Although Davis scored the last touchdown of the game, the workhorse for Picayune was Dante Dowdell, who carried the ball 40 times for 292 yards and scored on touchdown runs of 1,55, and 3 yards.

“We now get to prove to everybody how good of a team we are,” Dowdell said, noting that he was a freshman on the last Picayune team to make the state championship game. “We believe in each other. It’s great to be going back to championship game.”

The loss, though, spoiled an excellent game by Kiron Benjamin, who dueled Dowdell all night. Benjamin paced the Tornadoes with 202 yards on 22 carries, scoring on runs of 78 and 12 yards.

West Point also scored late against Neshoba Central, scoring the winning touchdown with about 1:20 left to play to beat the Rockets 20-14.

“You never want to lose your last game,” said Picayune coach Cody Stogner, acknowledging that West Point will be a tough opponent to beat. “Most teams in the state model themselves on West Point.”

Still, Stogner said his team has experience in the state championship against West Point with this years seniors being sophomores in 2019. “They should be able to tell the rest of the team what to expect.”

The rematch with the Maroon Tide (13-1) should be a running affair as both teams, combined, have attempted less than 130 passes this year. The game will be the final football game between high schools in Mississippi this year with a 7 p.m. start Saturday, Dec. 4, at M.M. Roberts Stadium in Hattiesburg, which is the home to Southern Miss.

Laurel coach Ryan Earnest said the season was good for the Tornadoes.

“I’m proud of my players,” he said. “They [Picayune] are a good team. They made a few more plays tonight that we did. If we could have made one more first down late, I think we would have had a good shot to pull the game out. But, that’s football.

“Eight of nine weeks ago, a lot of nobody thought we would be where were are at tonight,” he continued. “It stings, and it’s going to sting for a while. But, when the sting wears off, they’ll [his players] see we had a great season.”

For a while, though, it looked like Laurel would be making the trip to Hattiesburg. After forcing a turnover on downs at their 7 on Picayune’s initial drive of the second half, the Tornadoes went to work behind Benjamin, who sprinted 51 yards to get the ball from the shadow of the Laurel goalposts to the Picayune 48,

The Laurel drive stalled, though, with the Tornadoes facing a fourth-and-18 on the Tide 39. Quarterback Javonta Caldwell kept the drive alive, dancing through Picayune defenders until he found Tyrone Jones alone around the Tide 5. Jones made the catch and stepped into the endzone to give the Tornadoes a 28-17 lead with 5:21 left in the third quarter.

Stogner and his players said they knew they were coming back.

“We were never going to give up,” he said. “There was plenty of time left and we were confident in what we were doing. We never panicked.”

“All week we had worked on this game, on doing our job,” Davis said.

The Picayune comeback started with a defensive stand that forced a Tornado punt from their own 14. The punt only went 20 yards, setting the Tide up at their 34. Dowdell did all the work, carrying the ball five times and scoring from the 3, cutting the Laurel lead to five, 28-23, with 11:43 left to play.

Another three-and-out by the Picayune defense gave the ball back to Picayune at their own 43. Although the drive would end with a fumble at the Tornado 2, it set up a third Tide defensive stand.

After Benjamin punched the ball out to the 16, the Tide defense stiffened behind Jabari McWilliams, who led a gang tackle of Benjamin for a 4-yard loss on second down, and Amarion Tyson, who led a gang sack of Caldwell back to the Tornado 7.

Davis, though, made the decision a bad decision, taking the free kick for Picayune at his 35 and powering through the Laurel kick return team to the Tornadoes 37. Still, a holding penalty and two short Dowdell runs left the Tide with second a long from the 30.

Stogner dialed up a pass play, with Underwood’s pass dropping to the ground. However, the Laurel defender ran over the Picayune receiver, drawing a pass interference call and giving the Tide at first down at the Laurel 15 with just over two minutes left to play and with the Tornadoes clinging to a 28-25 lead.

“That was the big play of the game,” said Earnest, noting that it gave Picayune a second life deep in Laurel territory.

Davis would do the rest, preceding his game winner with a 9-yard dash to the 6.

“It’s awesome to win and go to the state championship,” he said.

Picayune drew first blood. After holding Laurel to a three-and-out on the first possession of the game, the Tide drove 63 yards in 12 plays capped by Dowdell’s 1-yard plunge.

Laurel would get on the board early in the second quarter when Benjamin found a hole on the left side of the Picayune line and broke open a 78-yard scoring run to tie the game at 7-7.

After Picayune responded with a 32-yard Morgan Craft field goal, Laurel would come back behind Caldwell. Although Caldwell had trouble getting the passing game going, he did connect well with Jones hitting the speedy receiver to the Tide 12. Benjamin punched it in one play later to give Laurel it’s first lead of the game, 14-10, with 3:32 left in the game.

That lead would be short-lived as Dowdell responded to put the Tide back up 17-14 with a 55-yard sprint. Laurel, though, would surge back in front behind Caldwell. Caldwell first raced through the Picayune secondary for 43 yards before Jessiah Contee pulled him down for the Tide at the Picayune 25. The, after a false start and a holding call, Caldwell again found Jones, this time on a 3-and-24, for a 28-yard scoring play, giving the Tornadoes a 21-17 lead at the half.

Caldwell finished the game 5-of-14 for 97 yards and two touchdowns. Jones had three catches for 88 yards and both scores. Caldwell also ran for 63 yards on nine carries.