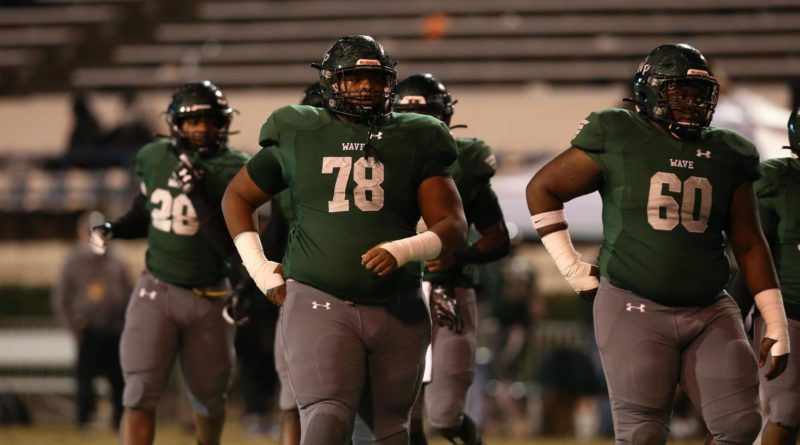 WEST POINT — The West Point Green Wave blew a two-touchdown lead in the second half with a few missed tackles and mental mistakes, but ultimately, they did what champions do.

With one of his few catches of the season, Corbin Hogan brought in a 40-yard touchdown reception ultimately sent the Green Wave to their sixth-consecutive MHSAA Class 5A State Championship game with a 20-14 win over Neshoba Central in the North Final Friday night.

The Green Wave controlled the majority of the game, despite getting in their own way late. In the end, leadership, maturity and that championship DNA helped West Point rise to the occasion.

“We fought the whole game,” West Point coach Chris Chambless said. “When they came back, our guys just stayed together. We told them at halftime that bad things will happen, you just have to pull through as a team. We had guys go down, but guys stepped up. We have a lot of work to do, that’s what we plan to do this week. Mental mistakes will hurt you. We made some, but we overcame it.”

The Rockets punted their opening possession and found themselves behind almost immediately. West Point quarterback Que Tillman-Evans called his own number, ran towards Neshoba Central’s sideline and rolled over a defender. Everyone thought the play was over, but there was no whistle and he kept going straight ahead and wound up scoring a 70-yard touchdown run.

Just like that, the Green Wave had a 7-0 lead with 6:19 left in the opening quarter.

Neshoba Central’s splendid quarterback Eli Anderson responded with an explosive play of his own, connecting with Ja’Naylon Dupree for a long reception inside West Point’s red zone. But it was all for naught, as they settled for a 25-yard field goal attempt and Hunter Bavetta’s kick sailed wide right.

The Green Wave threatened again with an effortless drive to the red zone, but the Rockets held their ground and forced a turnover on downs. That was pretty much it for offense in the first half, as West Point’s Jacoby Mcquiller thwarted two Neshoba scoring opportunities with interceptions. West Point held that 7-0 lead going into the locker room.

“They did a great job up front. We kept plugging and the plays eventually happened,” Chambless said.

West Point received the second half kickoff and cashed in to get a two-score lead. Kahnen Daniels went under center and scored on a naked bootleg from 20 yards out, giving West Point a 14-0 lead with 8:32 left in the third quarter.

The Green Wave defense got a turnover on downs on the ensuing possession, but couldn’t capitalize.

Halfway through the quarter, the Rockets finally broke through. Anderson threw across the middle to Elijah Ruffin, who weaved through Green Wave defenders en route to a 55-yard touchdown strike. Neshoba Central was back in it, but still trailed 14-7.

Going into the final quarter, the Green Wave looked to take a two score lead, but couldn’t as the Rockets forced a field goal that fell short and took over with 8:29 left to play. West Point immediately forced a punt, but back-to-back offsides penalties gave Neshoba Central a fresh set of downs. Dupree took advantage of the mental errors with a long reception and 10-yard touchdown run. With 7:03 left to play, the game was knotted at 14-14.

The Green Wave crossed midfield before penalties and a near-lost fumble put them in a third-and-long situation. Daniels found Corbin Hogan all alone for the go-ahead 40-yard touchdown pass to take the lead with 2:22 remaining.

The Rockets made their way into West Point territory after burning their final timeout. A first-down catch just outside the West Point 30-yard line stopped the clock temporarily to move the chains, but Neshoba Central couldn’t get the snap off before the clock hit zero, ultimately sending West Point to Hattiesburg.

“They have a bad taste in their mouth. Our seniors got after it in the offseason so we’ll see what happens,” Chambless said.

The Green Wave now turn their attention towards yet another MHSAA Class 5A Championship game, where they’ll face off against Picayune. Kickoff is set for 7 p.m. Saturday at M.M. Roberts Stadium.