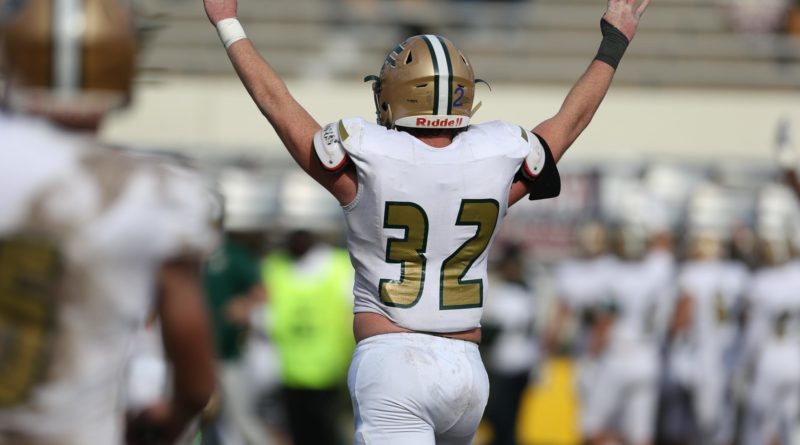 We’re down to four teams left in the MHSAA Class 4A Football Playoffs, and this weekend’s games feature two great matchups in the North and South State Championships.

Here’s a look at both games, and what to expect in each of them.

Caledonia turned a lot of heads when they beat Louisville 27-7 last week, but they’ll be the first to tell you not to call it an upset.

The truth is, the Cavaliers were more than competitive against the Wildcats last year in a 26-13 loss in the first round of the playoffs.

“Our kids believed we could beat Louisville,” Caledonia coach Michael Kelly said. “We went toe-to-toe with them last year, and we felt like we could handle it this year… We just softened up the middle of their defense and popped a couple of big runs, tackled extremely well and took away the running game.”

It’s a year full of firsts for the Cavalier program — before 2021, Caledonia had never hosted a playoff game or reached North State.

They’ve done it this year with an explosive offense led by senior tailback Darrius Triplett, who has rushed for more than 1,600 yards, and a defense that swarms to the football.

To keep the magic going, the Cavaliers will have to beat a very physical Senatobia team coming off a 27-22 road win over West Lauderdale and a 45-6 mauling of Itawamba AHS.

The win over West Lauderdale snapped a losing streak in the second round of the playoffs that dated back to 2005, so the Warriors are sort of in uncharted territory as well.

Senatobia is led by coach Brooks Oakley and features an offense centered around senior quarterback Tyreese Hullette, a dual-threat who can beat you with his arm or his legs. The Warriors have scored at least four touchdowns in 11 of their 13 games.

Poplarville is looking for a fourth-straight trip to the 4A State Championship, but they face an uphill battle against a Columbia team that has looked like the best team in 4A all season.

The Wildcats dominated the Hornets 27-3 back on Oct. 22, and have since rolled through the first three rounds of the playoffs. They beat Raymond 42-7 in the first round, beat Moss Point 28-18 in the second round and topped Mendenhall 21-12 last week.

The Columbia offense features a dynamic running game led by senior tailback Omar Johnson. The defense is led by newly minted 4A Mr. Football Jaheim Oatis, a defensive lineman poised to be the next big thing at the University of Alabama.

On the other side, the Hornets are again among the prolific running teams in the state, led by juniors Maurice Travis (157 carries, 1,281 yards) and Avan Jarvis (96 carries, 764 yards).

If they can hold the ball, shorten the game and cash in long drives for touchdowns, they’ve got a shot against the Wildcats.