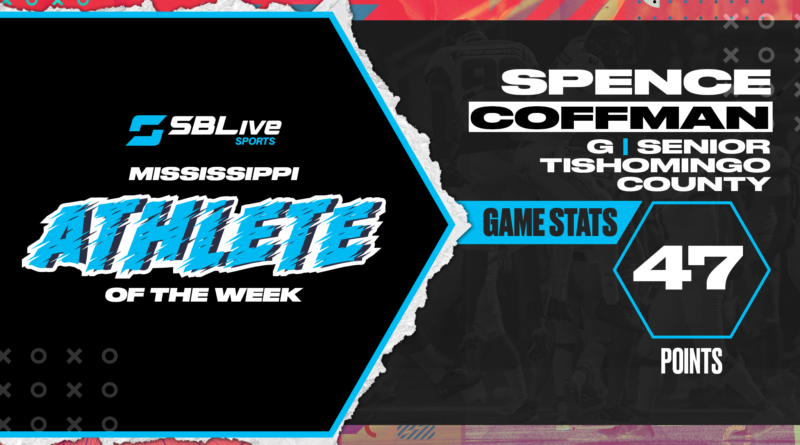 The senior dropped an impressive 47 points in the Braves’ 78-71 win over Alcorn Central.

Coffman received 33.16% of the vote, beating out Brookhaven’s Dre Ross who finished second with 21.13%. McComb’s Jamarcus Pittman finished third with 19.91% and Warren Central’s Brandon Gilliam finished fourth with 13.54%. There were over 126,000 votes tallied this week!

Kabe Barnett, Oak Grove
Completed 17 of 24 pass attempts for 290 yards and four touchdowns in a 33-7 win over Gulfport.

J.P. Coulter, Ocean Springs
Caught seven passes for 80 yards and two touchdowns and rushed for 48 yards on eight carries with another score in a 54-28 win over Pearl.

Dante Dowdell, Picayune
Rushed for 224 yards and one touchdown on 29 carries in a 35-13 win over Hattiesburg.

Brandon Gilliam, Warren Central
Went 3-for-3 on field goals, including kicks from 43 and 46 yards, and kicked seven of eight kickoffs for a touchback in a 30-20 win over D’Iberville.

Bray Hubbard, Ocean Springs
Completed 13 of 22 passes for 197yards and four touchdowns and rushed 17 times for 135 yards and two more scores in a 54-28 win over Pearl.

Jerry Johnson, Pearl
Rushed for 230 yards and three touchdowns in a 54-28 loss to Ocean Springs.

George Marion, D’Iberville
Was credited with six tackles, had a sack and a forced fumble and intercepted a pass in a 30-20 loss to Warren Central.

Zyonn Mayes, Biggersville
Was credited with 15 tackles (eight solo) and two passes defended in a 28-21 win over South Delta.

Jordan Mitchell, Starkville
Rushed for 207 yards and four touchdowns on just seven carries in a 63-21 win over Hernando.

Jamarcus Pittman, McComb
Completed 23 of 33 passes for 319 yards and three touchdowns in a 21-20 loss to Mendenhall.

Desmond Smith, Gulfport
Rushed for 211 yards on 20 carries with a touchdown in a 33-7 loss to Oak Grove.

Isaac Smith, Itawamba AHS
Rushed for 270 yards on 23 carries with two touchdowns in a 30-9 win over Ripley.

Dre Ross, Brookhaven
Rushed 12 times for 183 yards and three touchdowns and completed four of his seven passes for 110 yards and two more scores in a 42-14 win over East Central.

QD Walls, North Panola
Rushed for 128 yards on offense and had a 35-yard fumble return on defense in a 20-6 win over Aberdeen.

Scored 24 points with 17 rebounds and six blocks for the Knights as they moved to 4-0 on the season.

Over two games scored 69 points, brought down 24 rebounds and nabbed seven steals in a pair of wins over Wheeler and Ripley.

McDaniel tallied eight tackles from the defensive line position, five of which were for a loss.

Sykes averaged 17 points per game on 60% shooting with five rebounds, four steals, two assists and a block in three games this week.

Rowsey went 9-of-17 in the passing game for 222 yards and three touchdowns.

Davis caught four passes for 143 yards and a touchdown.

Johnson racked up 246 total yards, 134 passing and 112 rushing, and threw two touchdown passes while adding another on the ground.